The Peerless Prognosticator is ON THE AIR!!! -- Caps at Senators, March 25th

The Caps begin their weekend wrap-up to their six-game road trip with a visit to Ottawa to play the Senators tonight. The Caps are 3-1-0 so far on this tri…

“Hey, cuz, these guys named a coin after me.”

-sigh- What is it now, Cheerless?

“It’s from the exotic land of…Canada.”

“And did you know they named it after me?”

Yeah, I can see where you'd think that, Cheerless, but look at the coin. What do you see? 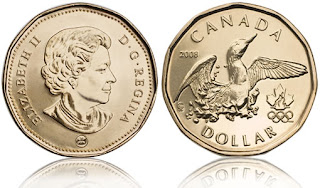 No, that’s the Queen. Look at the other side.

It’s a loon…loon…loonie. And did you know that a loonie was buried in the ice at the Olympics and that when the men’s and women’s teams won gold medals, it was thought the ‘lucky loonie’ brought the Canadians good luck?

“Haha…yeah, cuz. Good one. Now tell me why they have the guys who sang ‘Bohemian Rhapsody’ on their coin.”

Well, we do not have an answer for that one, so we’ll just get on with the prognosto. This is game five of the six-game road trip for the Caps, and their opponent is struggling. The Senators are last in the Northeast Division, last in the Eastern Conference, and 28th in the league in standings points. It is a team that has not scored more than three goals in a game this month, has only one player among the top100 in scoring (Jason Spezza, who is tied for 100th in points), has had to dress six different goaltenders this season, and despite going 6-4-0 in their last ten games, seems to be reverting to their struggling ways – 3-3-0 in their last six games, with two of the wins coming in extra time. The overall numbers look like this… 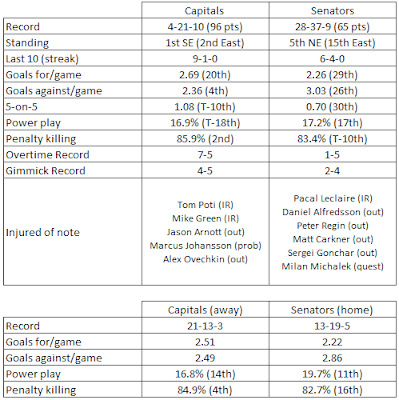 About that goaltending. The most recent contestant is Craig Anderson. Ottawa obtained Anderson in a trade with Colorado last month, sending goalie Brian Elliott the other way. The Senators looked at Anderson for 11 games, liked what they saw, and signed him to a four-year deal ($12.75 million). The reason? “Stability,” in the words of Ottawa GM Bryan Murray.

Well, stability is one thing, consistency another. In his dozen appearances with the Senators he is 7-4-0, 2.00, .940, with one shutout. But in those dozen appearances he has allowed one or no goals in eight games, four or more in three others (one of which he was pulled from after allowing four goals on 17 shots). He returned from a lower body injury last night in a 2-1 Gimmick win for the Senators over the Rangers. He is 3-4-0, 3.01, .905 against Washington for his career, including a 3-2 win over the Caps in December when he was tending goal for Colorado.

If he doesn’t get the call in the back-half of the back-to-back, perhaps it will be Curtis McElhinney. Caps fans will remember McElhinney’s only career appearance against the Caps – a 24-save effort while playing for Anaheim on February 16th. Trouble was, he faced 31 shots in a 7-6 Caps win. He was claimed off waivers by Ottawa, with whom he is 3-2-0, 2.14, .932.

Daniel Alfredsson is trying to return to the lineup despite enduring a problem with his back. He will not be returning tonight, though. With the Senators’ fourth-leading scorer out of the lineup, the burden falls heaver on Jason Spezza, who has missed 20 games to injury himself this season. Since his return from a shoulder injury on February 5th, Spezza is 7-17-24, minus-5, in 22 games. On a club that has struggled mightily this season (29th in the league in scoring), Spezza has been about the only bright spot. He has had a hand in nine of the Senators’ 15 goals over the last six games (3-6-9). Among the odder numbers for the Senators this season, Spezza has the only overtime winning goal for the team, getting that one in a 3-2 win over Tampa Bay last Saturday. Another set of odd numbers points to his consistency on one hand and the difficulties the team around him is suffering on the other. Spezza is 7-15-22 in wins this season, 9-13-22 in losses. He has been a reasonably consistent performer, win or lose, scoring-wise. But he is a plus-13 in wins, minus-22 in losses. Seems it is what the team does around him, independent of him, that has been a larger consideration. Spezza is 9-17-26, plus-1 in 25 career games against the Caps (no points in one game this season).

Ottawa has had its share of injuries, and having dropped far out of the running for the playoffs is looking at other players. What it means is that only two Senators have appeared in all 74 games this season. Nick Foligno is one. The son of former Red Wing/Sabre/MapleLeaf/Panther Mike Foligno comes into this game on a five-game points streak (1-4-5) to pull himself into a tie with his career best in points (32 and a career best in assists (20). But playing in all those games for a struggling team has its drawbacks as well, numbers-wise. He is tied for 851st in the league in plus-minus (-19). Only 11 forwards in the league have a worse mark. In 11 career games against the Caps Foligno is 0-4-4, plus-2.

Defenseman Chris Phillips is the other Senator to play in all 74 games this season. And this, his 13th with the club, is probably his worst. With only seven points this season he is almost guaranteed to finish with the lowest point total of his career for a season in which he played at least 60 games (2-12-14 is his lowest to date, 2000-2001). He has one power play point this season, and has been on the ice for 98 goals scored against the Senators. His minus-33 is the worst such number in the league – 871st among 871 skaters. He is 4-9-13, minus-1 in 46 career games against Washington.

The second-year defenseman is tied for the team lead in overall scoring (13-31-44) with Spezza. He is 4-8-12 in his last 13 games and has not gone consecutive games without a point in that stretch. He hasn’t been shy about shooting the puck, either, recording 43 shots in those 13 games. That works out to a 271 shot pace, which would be second in the league, behind Atlanta’s Dustin Byfuglien. On the other hand, he has been on the ice for more goals against than any other Senator except Chris Phillips, and he also has been whistled for nine minor penalties his last ten games, putting his team behind the eight-ball a little too often. Things happen when he’s out there. Pay attention.

The Great Goaltender Sweepstakes of 2011 continues, and this is Michal Neuvirth’s last opportunity to influence hearts and minds (if he has not already) before Semyon Varlamov returns to the ice tomorrow night in Montreal. He is 18th in the league wins, but has appeared in fewer games than any goaltender ranked above him. He is 12th in GAA, which is tied with Hall of Famer in Waiting, Martin Brodeur. He is 22nd in save percentage, but that’s better than Ryan Miller. He is tied for 13th with four shutouts, but that is more than Roberto Luongo has. Unless he is a victim of the odd bounces that plagued his performance against the Flyers in his last game, he should be expected to have a good night against this opponent. So, the game is “does he meet expectations?”


1. Yawn. A big win last time out against a team the Caps might face down the road. A big game tomorrow in Montreal. An opponent tonight that is several weight classes below their own in talent and performance. That has all the characteristics of a dangerous sort of game, the kind a team can take too lightly. And the Caps haven’t been immune to playing down to their level of competition this season. If they do that, and remember that Ottawa has played the Caps tough this year in three losses (two one-goal losses, one in overtime), it could be embarrassing.

In the end, one team is playing out the string, the other might be trying to maintain interest between big games in Philadelphia and Montreal. With Ottawa missing three of their top-eight scorers to injury (Alfredsson, Milan Michalek (questionable), and Sergei Gonchar), two others having departed to other teams (Alex Kovalev, Mike Fisher), and only Spezza with as many as 15 goals on the season, tonight’s opponent should find scoring very difficult… so long as the Caps take them seriously.