The Peerless Prognosticator is ON THE AIR!!! -- Game 28: Maple Leafs at Capitals, December 9th

The Capitals are back home after a two-game road swing down to Florida and up to Ottawa (you would think they were road-testing the new travel requirements of the teams in Florida they leave behind in realignment). A “just short” loss and a come-from-behind win. Fortunately, if the Caps had to split two road games, they came in the right order. It indicates some degree of progress.

But now the Caps are home, a place that has not been especially kind to them lately. Washington defeated Anaheim on November 1st by a 5-4 margin in overtime, bringing their home record at the time to 6-0-0. Since then they are 3-4-1 on Verizon Center ice and have managed only 20 goals in those eight games.

Now they get to face the Toronto Maple Leafs, a team that has surprised some, especially with the injuries they have endured. The Leafs come into this game already having lit up the Caps for seven goals in a 7-1 win on November 19th in Toronto. Since then, though, Toronto is treading water at 4-3-1 in their last eight games. Here is how the teams stack up against one another: 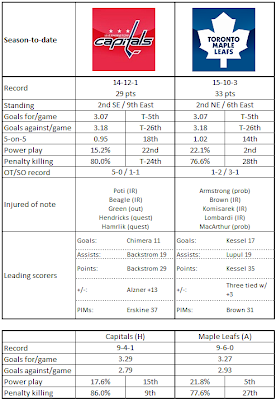 (click pic for larger image)
It is not often that one finds two teams facing one another that have the same goals for and goals against averages, and that might seem surprising given the expectations surrounding these teams.

1. Toronto has had success on the road recently, going 4-1-0 in their last five games and outscoring their opponents, 20-12.

3. Joffrey Lupul once recorded 53 points in a season. That was in his second year in the NHL, in 2005-2006 as a member of the Anaheim Ducks. But this season he seems intent on justifying his seventh-overall selection in the 2002 entry draft, setting a pace to finish 38-56-94 in scoring. He is tied for fourth in scoring and has yet to go consecutive games this season without getting at least one point – he has points in 22 of 28 games and has six multi-point games this season. His high-water mark was a four-point (1-3-4) effort against the Caps in the first meeting between these clubs.

2. The second period has not been kind to the Caps in terms of discipline. Only four teams have found themselves shorthanded more often than the Caps (44 times) in the second period of games this season.

3. The Caps have the ninth lowest number of times shorthanded this season (100). Good thing, because their save percentage when shorthanded is 20th in the league (.870).

4. One of the problems on the Caps’ power play…efficiency. The Caps are 21st in power play shooting percentage (11.03 percent). Almost as bad, they are 17th in shots generated per power play opportunity (1.37).

When Dion Phaneuf recorded two assists against the Caps on November 19th, it started him on a four-game scoring streak (1-5-6). Since then, however, he is without a point in five games and is a minus-3. He has never scored a goal against the Caps in six career games (doesn’t it seem like it should be more?), but he does have five assists. Four of those came on power plays.

Alexander Semin returned to the lineup against Ottawa after sitting out a game with an upper body injury. He was quiet on the offensive front in that game, recording only a single shot on goal and going without a point. It was his fifth consecutive game without a point. Tonight might offer an opportunity to break out of that slide. Semin is 7-10-17 in 15 career games against the Maple Leafs, five of those points coming on the power play (2-3-5). He did not have a point in the November 19 game against Washington.

1. Kill, Kill, Kill! The Caps were awful on the penalty kill against Toronto in their first meeting. The Leafs scored three times in five tries with the man advantage, and when they scored, it did not take long. The three goals were scored over a span of 2:24 in man-advantage time. Needless to say, a repeat of that pathetic performance will make this a short affair in terms of the competitive portion of the game.

2. One and one is…good. Once upon a time, Alex Ovechkin scored goals in bunches. This year he has yet to score goals in consecutive games. As far as games-ago is concerned, it hasn’t been so long since he did it, getting goals in three consecutive games last April (Toronto was one of the victims). It just seems like years. But more than that, it is getting him involved in the offense. He is 5-10-15 in 14 wins, 4-1-5 in 13 losses.

In the end, these are two teams of different sides of the expectations program. The Leafs have been a pleasant surprise, especially given their injuries, and more than that an injury to their wonder child goaltender, James Reimer. Although Reimer has returned to action, he has not yet won a game since his return (0-1-1, seven goals allowed on 56 shots faced). But Jonas Gustavsson, who stopped 40 of 41 shots against Washington on November 19th, has been playing well – only once in 11 decisions has he allowed more than three goals. Toronto might not have come into the season as a well-thought of team, but they have demonstrated themselves to be no pushover. This will be a step up for the Caps after their win in Ottawa.