Washington Capitals -- The Tortoise or the Hare 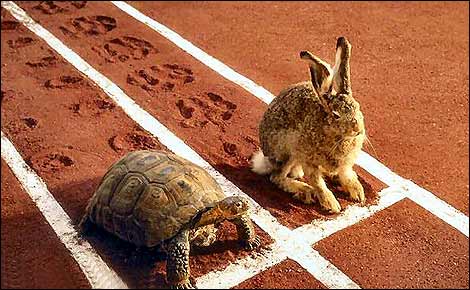 “The hare laughed at the tortoise's feet but the tortoise declared, 'I will beat you in a race!' The hare replied, 'Those are just words. Race with me, and you'll see! Who will mark out the track and serve as our umpire?' 'The fox,' replied the tortoise, 'since she is honest and highly intelligent.' When the time for the race had been decided upon, the tortoise did not delay, but immediately took off down the race course. The hare, however, lay down to take a nap, confident in the speed of his feet. Then, when the hare eventually made his way to the finish line, he found that the tortoise had already won.”

The moral of the fable, credited to the ancient story-teller Aesop, is that resolve, determination, and perseverance wins the race over the lazy and indolent.  It would seem to have a perverse relevance to the Washington Capitals these days.  Recently, Ed Frankovic and pucksandbooks at On Frozen Blog authored essays that spoke of the dilemma facing the Capitals these days, that being whether or not to trade center Mike Ribeiro for futures.

Generally, both seem to agree that holding on to Ribeiro does not serve the mid-to-long term interests of the club, that Ribeiro could be moved for some combination of picks and prospects that would improve the club 2-3 years hence.  We agree, primarily because doing so aligns those assets better with what Caps fans hope is the emergence of Filip Forsberg and Evgeni Kunzetsov as the next generation of highly skilled players to complement those who by that time will be comparative grizzled veterans – Alex Ovechkin, Nicklas Backstrom, John Carlson, Karl Alzner, and Brooks Laich.

But the sturm und drang attaching to this matter brings into stark relief a problem with this franchise.  To its credit, it applied a cold, calculating eye to what it had in 2003-2004 – an aging, underperforming, overpaid squad that might, if things fell into place, might squeeze perhaps another playoff appearance out of itself.  But it was not a team that had much promise going forward.  So, the Caps tore it out, root and branch, shipping players hither and yon for draft picks and prospects.  We covered this in some detail over the years that followed.

It was all part of a “plan” to return the Capitals to competitiveness, to make them compelling to watch, and make them a more complete hockey team, one that could challenge for a Stanley Cup.  One of the elements of the plan, perhaps the most important one, was another “C” word – “commitment.”  The Caps committed to a plan that might not (and in fact did not) bear fruit immediately.  But adopting the mindset of the tortoise – resolve, determination, and perseverance – the club committed to the long term.  The “rebuild” would be slow, steady, and sure (although winning a ping-pong ball drawing for the top overall draft pick in 2004 did not hurt, either).

By 2007-2008, the Caps were competitive, securing a playoff spot with an incredible closing kick.  By 2009-2010 they were the best team in the sport…ok, in the regular season.  Even the most callous and cynical observer would have to agree, the plan was working. The unbroken upward arc of performance signaled that it was not a matter of “if,” but “when” the Caps would finally hoist the Stanley Cup.

But here we are, three seasons removed from the Presidents Trophy season of 2009-2010, and the “plan” looks stale.  The tortoise no longer looks determined as much as he looks slow.  The players who had career years in 2009-2010 (those who remain with the club) struggle now to rise above also-ran status.  The club that lost only 15 games in regulation over the entire 82-game regular season in 2009-2010 has already lost eight times in regulation in 16 home games this season.  The team that might have been called “The Greatest Show on Ice” in 2009-2010 is not even the greatest show in its own city.  Sure, the Caps still sell out Verizon Center and have a long sellout streak, but that statistic seems to have less and less meaning every day as the club’s fortunes on the ice dim from week to week.

It is a good thing to be the tortoise – resolved, determined, purposeful.  But in running the race, you had better be sure that the hare does not possess those qualities.  Since the Caps climbed to within sight of the summit of 2009-2010, they have been passed along the way by the Chicago Blackhawks (Stanley Cup winners in 2010), the Boston Bruins (2011), and the Los Angeles Kings (2012).  Their nemesis of the past two decades, the Pittsburgh Penguins – the team with which the Caps were supposed to be competing for Cups for a decade – won a Cup in 2009 and are heavy favorites to win the Cup this season.  The Carolina Hurricanes and Winnipeg Jets would seem to have caught the Caps, at least for the time being, in their own division.  The Rangers, the Senators, the Devils…the Caps are looking up at all of these teams these days.

The Mike Ribeiro situation is a symptom of something deeper that troubles this franchise.  Helmuth von Moltke the Elder, considered a great military strategist in the 19th century, said words to the effect that “no plan survives first contact with the enemy.”  To the Capitals’ credit, their plan survived half a decade.  But now, their plan (such as it is) seems to depend heavily, perhaps too heavily, on what Filip Forsberg and Evgeni Kuznetsov – neither of whom has yet to play a minute in anger in North America – can bring to the table down the road.  And if Ribeiro is not moved for assets that align with that notion, then a lot of eggs are being placed in the baskets of Forsberg and Kuznetsov.

We believed five years ago, and do so now, that the draft is the most reliable way of building a roster, both in terms of aligning with a philosophy of hockey and doing so in the most economical way.  That is a philosophy, though, not a plan.  If your plan is to be the tortoise – resolved, determined, purposeful – the hare cannot have those same qualities.  Because if it does – and Pittsburgh, Chicago, Boston, Los Angeles, and a handful of other teams certainly appear to have those attributes -- you lose.

-- The good and the bad… Looking at the individual points rankings, there are the Penguins with the first and second ranked point getters, and there is Tampa Bay with the third and fourth ranked scorers.  One is a prohibitive favorite to win the Stanley Cup. The other… uh, no.

-- Caps fans know that Mike Ribeiro is having a fine season.  But there is another statistic of note that Caps fans might not be paying attention to with respect to Ribeiro’s season.  He currently has 41 penalty minutes in 33 games.  He has never finished a season in his career averaging more than 1.0 penalty minutes per game.

-- Since the lockout of 2004-2005, only one qualifying player in the NHL finished the season with a shooting percentage of greater than 25.0 percent – Mike Ribeiro in 2007-2008 with Dallas (25.2 percent).  At the moment, four qualifying players have at least a 25.0 percent shooting percentage: Patrik Berglund, Chris Kunitz, Alex Tanguay… and Ribeiro.

-- That Sidney Crosby leads the NHL in assists is probably not a surprise to anyone.  But Chris Kunitz tied for sixth with 24 in 35 games?  He’s never had more than 35 in a season.  Oh, and Ribeiro is tied with him.  So is Nicklas Backstrom.

-- It’s all very nice that Steven Stamkos has 23 goals and all, but really… 43 goals against while on ice?  41 of them at even strength (no non-Lightning forward in the league is close)?  Hey, Milbury, how ‘bout talking about this guy playing in his own end.

-- More Ribeiro… he’s tied for third in the league power play points with that guy in Pittsburgh.  No, not Iginla.

-- It might not be too much of a stretch to be unsurprised that Jason Chimera leads the Caps in minor penalties taken.  It would probably surprise you more, dear reader, to know that Alex Ovechkin is tied with him (13 apiece).

-- Matt Hendricks has as many fighting majors for the Caps as the rest of the team combined (6).