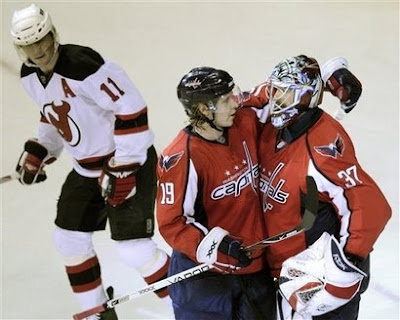 James Mirtle has a nice profile in his blog today...
...check it out.
Posted by The Peerless at 2:32 PM 1 comment:

A Ring of Honor

Corey Masisak penned a column in this morning's Washington Times under the headline, "Caps Need an Honor Roll."

It's certainly a topic worthy of discussion, and now might be the best time to get that ball -- or puck, if you will -- rolling.

Why is this the "best time?" Well, for those of you who frequented RFK Stadium for Nationals games the past few years, you no doubt remember seeing the Washington hall of stars banner displayed in right field.

RFK -- home to the Senators, Redskins, DC United, and Nationals over the years, not to mention some famous media personalities who covered those teams -- was a logical place to honor Washington's sports heroes, without respect to the sport they played or covered.

But now, with Washington home to arenas that are dedicated to sports -- FedEx Field for the Redskins, the new Nationals Park opening for the baseball team, Verizon Center for the Wizards and Capitals, RFK still for the United -- it might be the best time to introduce the idea of a Ring of Honor at Verizon Center to honor those who played and chronicled events under its roof (and, by extension, the old Capital Centre/USAirways Arena).

A "Ring of Honor" might be a difficult thing to accomplish, logistically, since the obvious choices for locations for such a ring are now display boards for in-game advertisements or messages. But perhaps a ring above the rink...one made of banners to be hung as one might do with championship banners...to honor those of the Bullets, Wizards, and Capitals who have distinguished themselves over the years; to honor a Dave Fay or a Ron Weber in a manner befitting the best that Washington winter sports and sports journalism has to offer.

Readers, what say you?
Posted by The Peerless at 7:17 AM 2 comments: 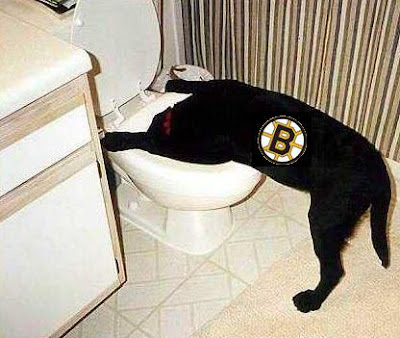 Boston, which before this swift turn had been on a 7-0-1 run, is in seventh place in the Eastern Conference, only five points ahead of the Capitals. As if it needs repeating...the Bruins' next game is tomorrow, against the Caps.

Let's hope the Caps put the Bruins in the mood to once more, "throw a nutty."
Posted by The Peerless at 6:35 AM No comments:

The Peerless thought this nine-lives thing applied only to the domesticated variety of the species.

And will someone please tell Craig Anderson he is not Roberto Luongo?

seems to have another life (please let it be their ninth) after beating , 5-2, last night to close to within two points of the Caps. still has two games in hand on the Panthers, but with the Cats on a three game winning streak, the margin is uncomfortably close.

And then there is …the Lightning’s season is over – has been for a while now. But with the possibility of the Lightning giving the Caps a hand in ’s battle with for eighth place, the Flyers ended an eight-game losing streak at home to the Lightning with a 3-2 win. The insult was the Flyers scoring the game-winner with less than two minutes remaining in a 2-2 game, not to mention the Lightning registering a measly two shots on goal in the third period, neither of them from a forward. The Lightning are now the leaders in the ping pong ball standings.

continued their surprising late push. Their 3-2 win against last night made them 9-2-1 in their last dozen games and gave the Hurricanes a five-point lead over for the Southeast Division lead. has two-games in hand. 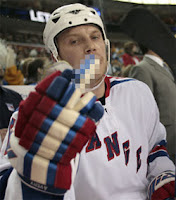 And speaking of getting hot at the right time, the New York Rangers pulled seven points ahead of with a 4-1 win over the Islanders. The Rangers haven’t lost a game in regulation in a month (February 7th, 4-1 to ). They are 8-0-3 over that span. Sean Avery might be dedicating the remainder of his season to Jaromir Jagr, but it was Avery with two goals last night – Jagr was held pointless.

And from the “what the #@%& happened to file?,” the Senators dropped a 2-0 decision out on the coast to the Los Angeles Kings late last night in what might be the most foul insult of their 8-15-3 record since beating Detroit, 3-2, last January 12th. The Senators have been shutout four times in those 26 games and are now tied for fifth in most times shutout. By the way, the shutout came at the hands of Erik Ersberg (he in the picture on the left) – his first NHL victory in his third NHL game.

Even though the Caps didn’t play, it was quite a night.