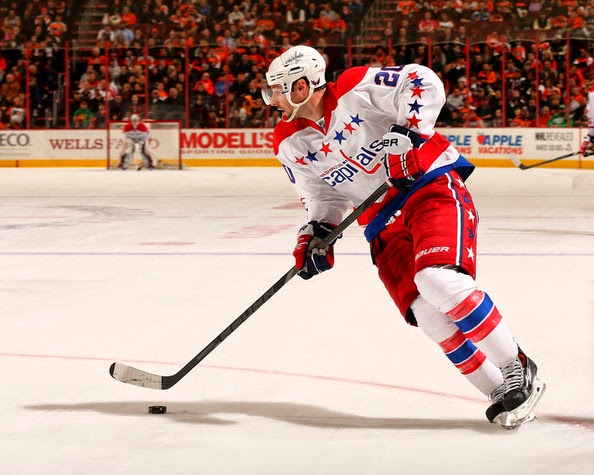 “The measure of a man is what he does with power.”
― Plato

Plato might not have been speaking of “power” in the hockey power play sense, but if he was it might have applied to the season Troy Brouwer had in 2013-2014.  Brouwer finished in the top-20 in total power play points among forwards and sixth in power play goals. His 12 power play goals almost doubled his previous career high (seven, accomplished three times).  His 21 power play points was five more than the 16 he posted with the Caps in 2012-2013.

The power play production allowed Brouwer to post career highs in total goals (25) and points (43).  He also had a career high in shots on goal (161) and did it playing in all 82 games for the second time in his career.

As one might expect, Brouwer’s success mirrored that of the team.  In 38 wins Brouwer was 19-7-26, plus-9 overall, 10-4-14 on the power play.  In 14 extra time losses in which the Caps earned a standings point he was 5-4-9, plus-1, 2-2-4 on the power play.  In 30 regulation losses he was 1-7-8, minus-16, and he had only three power play assists.  Given this scoring profile in wins and losses, one might think it fortunate that he set career highs in goals and points, and was so productive on the power play.  If he was not, the Caps might not have made it as close as they did in their playoff run.

Odd Brouwer Fact… Troy Brouwer has 36 power play goals over the past five seasons, one of 29 players to record at least that many.  That represents 35.6 percent of all the goals he scored over the period.  That ranks 10th among those players, right behind Alex Ovechkin (36.0 percent).

Game to Remember… March 8th versus Phoenix.  The Caps were hanging by a thread. With 18 games to play they were in 10th place in the Eastern Conference, three points behind eighth-place Detroit for the last playoff spot.  And that thread was fraying at home against the Phoenix Coyotes.  The visitors scored single goals in the first and second periods to take a 2-0 lead into the final 20 minutes, but the hosts had a little something left.  The Caps got started in the third period when Karl Alzner scored in the tenth minute of the period.  Brooks Laich tied the game 32 seconds later.  That set up a wild finish.

The Caps’ break came when David Moss was sent to the penalty box at the 13:37 mark for tripping Dmitry Orlov.  It was all the Caps needed.  Alex Ovechkin fed John Carlson at the top of the offensive zone, and Carlson forwarded the puck to Nicklas Backstrom along the right wing wall.  Backstrom circled out, and with defenseman Oliver Ekman-Larsson backed off low in the right wing circle, Backstrom inched in and fired a shot at goalie Mike Smith.  Smith turned the puck away with his right pad, but the rebound kicked free to Troy Brouwer camped at the edge of the left wing circle.  Brouwer swooped on the rebound like a hawk on a field mouse.  He slammed the puck into the back of the net before Smith could dive across the crease, and the Caps had a 3-2 lead, the final margin in a come-from-behind win that kept their playoff hopes alive.  It was Brouwer’s third game-winning goal of the season and first not scored against the Carolina Hurricanes.

Game to Forget…  April 4th versus New Jersey.  The Caps were still on the wrong side of the playoff divide as the calendar flipped to April, four points behind Columbus for the last playoff spot with five games to play.  When the Caps took the ice against the New Jersey Devils on April 4th it was to play a game they had to win.  It looked as if they might when they took a 1-0 lead mid-way through the first period on a goal by Alex Ovechkin.  The Devils crawled back into it, though.  Tuomo Ruutu scored in the 13th minute of the second period and then, with less than five minutes left in the game Ryan Carter scored to give the Devils a 2-1 win.  The odd thing about the two Devils goals was that the same three forwards were on the ice for both.  Jay Beagle, Marcus Johansson, and Brouwer.  For Brouwer it was one of those games, on ice for both goals against, only one shot on goal (a power play shot in the fifth minute of the first period), only one hit credited, and he was on ice for the last ten seconds with the Caps skating six skaters and the goalie pulled, looking for the equalizer that never came.  It would be a loss that finally sank the Caps’ dim playoff hopes.

Brouwer had a good year, and then again, there seemed to be something missing.  He put up career numbers, but not at the rate he did in the previous, abbreviated season.  He was as much a fixture on the power play, and in his own way almost as effective, as Alex Ovechkin, but at even strength his performance was rather ordinary.  If he scored, the Caps won.  If he didn’t, they didn’t.  In a sense he was representative of the Caps’ season to the extent offense was driven more by power play success than that at 5-on-5.  It made for a superficially fine season, but upon closer inspection not as much of what the Caps needed where they needed it, at even strength.