Alex Ovechkin had seven goals in 11 games in the month of October. Until he registered three goals in the last two games of the month, folks were thinking he was suffering what for him was a slump. The fact is that the October results are entirely consistent with his first month production over his career. In five previous seasons, for example, Ovechkin scored at a rate of slightly less than eight goals every 11 games. This year was not out of the ordinary.

But while his October production is in a manner consistent with his history, what of his prospects for the full year? Could we expect his full season production to approximate his 56-goals-per 82 games that he had in his first five seasons? Well, it might be that we have seen Ovechkin’s career best already (65 goals in 2007-2008). Goal scoring is a young man’s occupation, at least if you look at the top active goal scorers and a couple of other contemporaries he has been dueling with for the goal-scoring lead since the lockout.

First, Ovechkin. If we track his goal scoring on a game-by-game basis we can plot what amounts to a history of his most recent 82-games on that game-by-game basis (not unlike a moving average of results taken 82 games at a time). What we find is that his “peak” thus far in his career came in Game 338 of his career, when he reached a total of 68 goals in the 82-game period ending with that game. He accomplished this at the age of 24 years and 43 days (keep that in mind). Since then, his production has fallen (albeit not precipitously) to where by October 23rd he had a total of 55 goals in the 82 games completed on that date. Graphically, it looks like this (with a “best fit” function superimposed on the history -- click for a larger version): 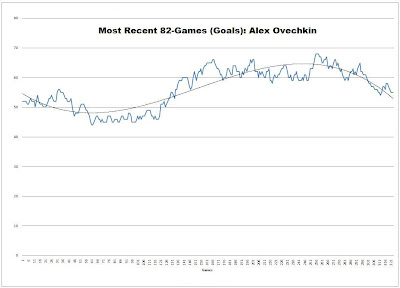 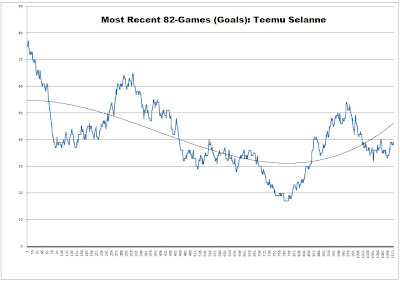 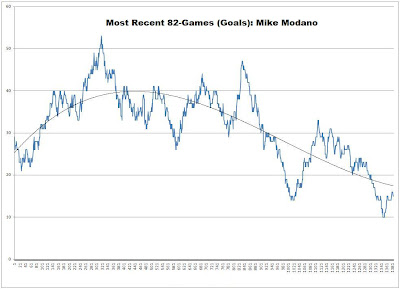 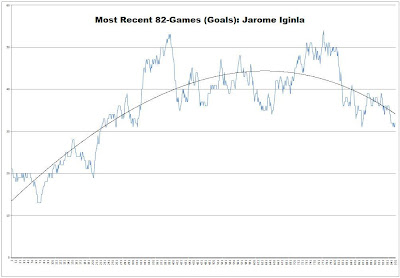 Selanne’s function has an odd look to it, largely because of his spectacular 76-goal rookie season. But if you account for that by starting at the early trough of his career, the path of 82-game goal totals looks similar to that of Ovechkin until he enjoyed a renaissance in his late career.

Mark Recchi has not been a particularly prolific goal scorer since his early career (over his first 275 games). But his goal-scoring function follows a similar trand of an early rise, then a longer, slower decline.

Modano tracks in a similar manner. Iginla and Kovalev, too (although Iginla enjoyed a brief return to his peak). There are unique aspects to the paths these players have taken to get to where they are as the top five active goal scorers. But there is something these five players share much more closely – age. The latest any of these players reached their peak 82-game production came at the age of 28, and in most cases much lower:

Then there are the cases of two of Ovechkin’s contemporaries – Ilya Kovalchuk and Dany Heatley. Both players came into the NHL in the 2000-2001 season. Each has played a similar number of career games (632 for Kovalchuk, 598 for Heatley), and both have similar career per-82 game goal scoring numbers (44.2/82-games for Kovalchuk, 41.7/82-games for Heatley). But already Heatley is exhibiting a goal scoring function similar to the six players described so far, and Kovalchuk might be just passing his peak. Graphically, their paths look like this: 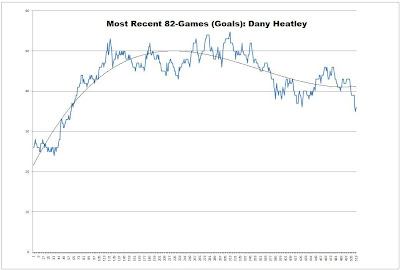 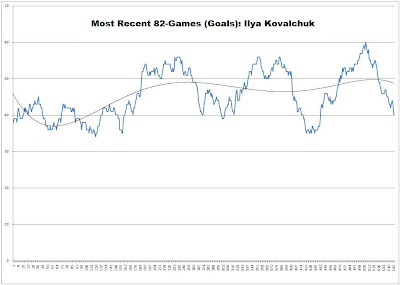 Age-wise, they hit their peaks in a manner consistent with those top-five active goal scorers:

This is certainly not an exact science. It is a small sample of scorers we are comparing to Ovechkin, but these seven players are among the most prolific goal scorers in this era of hockey. We would not predict with any degree of certainty that Alex Ovechkin’s goal scoring production is destined to exhibit a monotonic decline as the years go by (i.e., a function which preserves the given order, in this case year-to-year reductions). He could have a renaissance along the lines of a Selanne or the periodic bumps that Ilya Kovalchuk has had. But looking at peak 82-game periods, Ovechkin fits snugly within the range of the other seven skaters. In fact, he was the youngest of this group to hit what for now is his peak:

Players add elements to their games as time goes on. Certainly this had been true for players like Selanne, Recchi, or Modano. Such players can achieve success in a team context as the years pass, as was the case of Selanne and Recchi, who won Stanley Cups well into their 30’s. As for Alex Ovechkin, he might be entering what looks to be the "late prime" of his goal-scoring years.  What accounts for this goal-scoring phenomenon?  The lack of a book on these players early in their careers?  A youthful exuberance that fosters a sort of fearlessness when in comes to paying a price to score goals?  The fact that the years have not yet begun to take a physical toll?

Programming note: We are going to go dark for a little while. Hopefully we will return to this space in about a week.
Posted by The Peerless at 6:15 AM 4 comments: