Happy Anniversary...Now, How About a Happy Springtime? 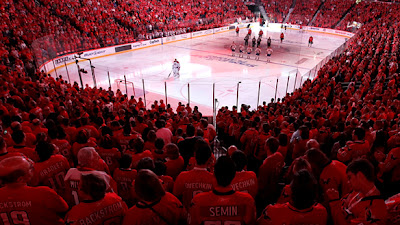 Yesterday marked the 13th birthday of the Verizon Center, then called "MCI Center."  Sunday will mark the 13th anniversary of the Washington Capitals' first game there.  In that game, Jeff Toms scored 3:32 into overtime to give the Caps a 3-2 win over the Florida Panthers in the inaugural game at the big house on Fun Street.  It would be the springboard to a 26-20-8 finish that would earn the Caps a playoff berth that they used to earn a trip to the Stanley Cup finals.  And it is here where the Verizon Center showed itself not to be a friend of the Caps in the spring.

The Caps opened the playoffs in the spring of 1998 with a 3-1 win over the Boston Bruins, signaling that the new arena would give the Caps quite a home-ice advantage.  But starting with that game and that season, and over the 12 years to follow, Verizon Center has been anything but an "advantage" for the Capitals in the playoffs...

-- The Caps have a 14-22 record in Verizon Center in seven playoff seasons.

-- In six of those seven seasons, the Caps would play their last game of the season -- a loss -- on Verizon Center ice.

-- In three of those six seasons, the loss would come in a Game 7 (each of the last three seasons, to the Flyers, Penguins, and Canadiens).

-- In one of those six seasons, the last game would be a three-overtime loss on a power play goal scored by Tampa Bay's Martin St. Louis, the penalty being for the mundane offense of too many men on the ice.  It was one of three losses at home -- two in overtime -- by the Caps to the Lightning in that year.

-- In seven playoff seasons since VC opened, the Caps have never had a winning playoff season at home.  The best they have done is to break even in two seasons -- in 2008 against the Flyers, and in 2009 against the Rangers and Penguins.

-- The Caps have a 2-6 record at Verizon Center in overtime playoff games.  Three times they lost games on power play goals (twice in one series, against Tampa Bay in 2003), and once they lost scoring into their own net on a deflection off a Capitals' stick.

It's nice that the Caps have a 12-1-1 record so far this season in Verizon Center.  It was nice that they had a 30-5-6 record at home last season and a 29-9-3 record there in the season before that, not to mention winning eight of their last ten at home in that big finish to the 2007-2008 season.  But when the trees bloom and the flowers make their way toward the sun in the spring, Verizon Center (or MCI Center, or "The Phone Booth"... whatever you want to call it) has been a house of horrors for the Caps and their fans, especially with three Game 7 losses in the past three years.

Happy Anniversary.
Posted by The Peerless at 10:18 AM 3 comments: 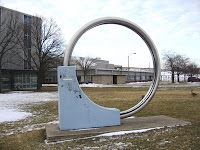 Last night the Caps lost a 2-1 decision to the Dallas Stars in a game that will be remembered for two sequences lasting a combined 30 seconds more than will the other 59:30 of the game.

The first sequence lasted twenty seconds, the length of time it took for the Caps to tie the game at a goal apiece in the third period, courtesy of a goal from Mike Knuble off a nice feed from Mike Green, to a goal restoring the Dallas lead by Brandon Segal that goalie Michal Neuvirth seemed to lose in the background before he reacted too late to it.

The second sequence came in the last ten seconds of regulation. John Carlson took a shot through traffic, Alex Ovechkin creating the havoc in front of Stars goalie Andrew Raycroft. Ovechkin and defenseman Karlis Skrastins fought for position as Carlson was winding up, and Skrastins ended up piling into his own goaltender. Goal? Well, no. The score was immediately waved off by referee Dan O’Rourke, who whistled Alex Ovechkin for a goaltender interference penalty despite not touching Raycroft. In fact, Raycroft would say later that the only thing he saw was Skrastin’s backside. Did Ovechkin commit a foul despite not being the player to make contact with Raycroft? Well, here is what Rule 69.1 has to say on the subject…

How you stand on Ovechkin’s situation depends on how you interpret the verbs, “pushed, shoved, or fouled.” Skrastins was not fouled (no penalty was called on Ovechkin for interference or any other contact penalty on Skrastins). As for the matter of “pushed” or “shoved,” this didn’t seem to us a “Hal Gill” instance, when Ovechkin deposited Gill in the lap of the Montreal goaltender in a game against the Canadiens last year. This was two guys fighting for position, and it seems Ovechkin was penalized for being stronger than Skrastins in fighting for that position.

-- Another game, another power play goal. The Caps were 1-for-3 last night.

-- Eric Fehr had 13 shot attempts (in only 12 minutes and change of ice time), four of them on goal, those four shots coming from an average of about 20 feet from the net. It was among the more animated games Fehr has played recently.

-- Jeff Schultz led the Caps in hits?! That thud you just heard was the Schultz Haters Society fainting.

-- Sometimes, you know? The shots just don’t go in. The Caps launched 82 shot attempts at the Stars’ net (39 getting to or past Raycroft…oops, 38). They had more misses (22) and shots blocked (22) than Dallas managed to get on goal (21). Only two Caps didn’t have a shot attempt – Matt Bradley (who played only 6:30, none of it in the last 9:22) and Scott Hannan. Only Bradley, Hannan, John Erskine, and David Steckel did not have at least one shot on goal. Fans can’t say the Caps didn’t shoot the puck.

-- Last spring, Alexander Semin took 44 shots on goal in the playoffs without finding the back of the net. Well, Alex Ovechkin is at 41 shots without a goal over nine games and counting.

-- Mike Green had 12 shot attempts last night, four of them on goal. He went without finding the back of the net, too, and his streak without a goal has reached seven games and 19 shots. But he has been on the ice for only six of the 21 goals scored against the Caps in that span – four at even strength – that (given his ice time) is not a large number.

-- Scott Hannan… 19:30 in ice time (4:50 in shorthanded ice time), three hits, four blocked shots (team leader for the night). Not bad, even with the two giveaways.

-- Brandon Segal… a fight and the game-winning goal (on his only shot on what would be his last shift of the game) in only 5:52 of ice time. This ain’t so hard.

In the end, one standings point is not likely to matter in the larger scheme of things for the season. But it is a point the Caps were denied largely because Alex Ovechkin can impose his physical will on most players in this league, including the likes of Karlis Skrastins. It was an iffy call to say the least, although to dismiss it out of hand as clearly a bad call is a little too “home town” a perspective. From our chair, though, it was, because we understand the verbs “push,” “shove,” and “foul” and have yet to see in that sequence how any of them apply.

We’ll take it though, if the Caps can someday get one of these calls on their side. Say, in the Stanley Cup finals.
Posted by The Peerless at 6:57 AM 2 comments: