OK, Bog Boy...Now You're Scaring Me

Isn't there some policy at the Post restricting the number of words devoted to hockey in a given week?
Posted by The Peerless at 1:04 PM 2 comments:

A thoughtful, and yet entertaining solution to "The Gimmick"

The Gimmick got me thinking…

It’s just so, well, bland. Three guys, three shots, skate in, do your thing, one team scores one more than the other, everyone goes home.

There must be a better way.

Well, your ol’ pal Uncle Peerless has the prescription for your mid-winter overtime blues. We revamp overtime.

We’d leave this part of the overtime unchanged. If a team scores before five minutes are up, everybody gets home before The Daily Show comes on. But, if not…

Now, we start to have some fun. It’s three-on-three with a catch. Only one defender can enter and defend in the defensive zone at a time; only two attackers can be in the offensive zone. The three-on-three stuff is a neutral zone thing, only, to advance the puck. If more than one defender occupies the defensive zone, or of all three attackers occupy the attacking zone…penalty. If we’re still tied after five minutes…

Here’s the catch. The skaters have to tie their legs together – sort of a “three-legged-race” thing. It would make for some tough strategy decisions. Imagine Alex Ovechkin and Michael Nylander tied together…one is attacking the net, the other is doing salchows in the circle. Or, do you put a forward and a defenseman together? Two defensemen? What if the defensemen are Mike Green and Jeff Schultz? And, if that doesn’t work, and we’re still tied after five minutes?...

This is the “gladiator” round. The coaches pick one player, each. Whoever they pick, they have to stay out there for the entire five (or fewer) minutes. If a player goes down to injury, the player still standing has to await the call from the referee – thumbs up, he gets a chance to shoot a penalty shot at the other goalie. If the referee chooses thumbs down, the player gets to kill the player on the ice.

Round Five – Goalie on Goalie

This is the no-holds-barred, “ultimate fighting championship” portion of the competition. Anything goes…want to whack your opponent with the paddle of the stick? Go for it. Pick up a handful of snow and toss it into his mask? Be our guest. Whatever. Anything a goalie can do to get the puck in the other net – while letting off some steam that has been building up from being abused in his crease all night – well, use your imagination, guys. And if, by some stroke of fate, we’re still tied after five minutes?

Mascots. We just haven’t figured that one out, yet.
Posted by The Peerless at 12:26 PM 1 comment:

Email ThisBlogThis!Share to TwitterShare to FacebookShare to Pinterest
Labels: The Gimmick, things that make you go 'hmm...' 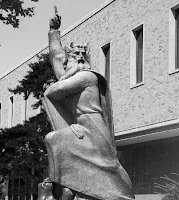 The Good, the Bad, and the Ugly. Spaghetti Western, Caps game… take your pick.

The Caps had their good moments, their bad ones, and their down right ugly ones in last night’s 5-4 Gimmick loss to the New York Rangers at Madison Square Garden. Let’s review, shall we?... 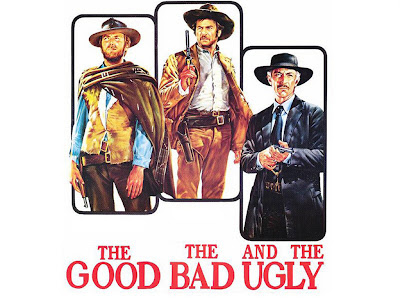 The Good… Mike Green had two goals to give him 21 for the season. That number is now seven goals ahead of Sheldon Souray and Shea Weber among defensemen. His 49 points is six ahead of second-place Brian Raflaski. Oh, did we mention he’s played 11 fewer games than Souray or Weber, and 12 fewer than Rafalski?

The Bad… pretty much anyone Green wasn’t paired with. The Caps defense was credited with one takeaway last night (Green). There seemed to be more than a little confusion, too… like on the first goal, when Karl Alzner was pointing at Ryan Callahan coming late into the play as the puck was being carried down the left side by Lauri Korpikoski. Alzner left the middle to support Milan Jurcina on the left side, Nicklas Backstrom never did catch up, and Callahan had a free pass to the top of the crease to direct Korpikoski’s pass into the net.

The Ugly… the second period. The Rangers hadn’t scored three goals in a period since December 29th, and that was against the Islanders, so maybe that shouldn’t count. The last time before that?... against the Caps on December 23rd.

The Good… The Hershey Boys – Tomas Fleischmann and Eric Fehr. They had a goal and an assist, each. More to the point, both were aggressive in the offensive zone. From time to time both of these guys seem to be a bit passive, even deferential to linemates. Last night, they just played their games. And a slice o’ pie to Sergei Fedorov… 11 of 17 in faceoffs (seven of ten in the defensive zone) and a plus-3.

The Bad… This will seem harsh, but Brooks Laich had his chances and just couldn’t put them away, most notably when he had Henrik Lundqvist down and out on the last attempt in the Gimmick. He gets that backhand over Lundqvist’s pad, we might still be at it.

The ugly… In the synchronized suckitude event (even strength category), that goes to Boyd Gordon and David Steckel. OK, now that was harsh, but geez guys… each of you were on the ice for those three second period goals the Rangers scored, and it wasn’t as if they were scored by Gretzky, Howe, and Orr… Korpikoski, Naslund, and Mara? Combined, they split a minus-6 and split 14 draws into wins and losses.

The Good… Jose Theodore foiling a three-on-one break-in for the Rangers about seven minutes into the game.

The Bad… Theodore “Donavan McNabbing” the winning Gimmick goal. Just as McNabb didn’t know NFL games could end in ties, so Theodore didn’t know a Gimmick goal could be scored (as it was) after the shot it the crossbar and came out. The puck rebounded off the crossbar and hit Theodore, who by his own admission wasn’t getting out of the way, thinking the play was over. The puck then trickled back into the net.

The ugly… Nigel Dawes and Ryan Callahan (no, not Mario Lemieux or Mike Bossy) getting Gimmick goals for the win...u-u-u-u-gly.

The Good… shutting out the Rangers on six power play opportunities.

The Bad… getting only two power play opportunities of their own.

The Ugly… taking four penalties – three of them in a span of less than six minutes, the fourth being a double minor – in the third period. The Caps killed any momentum they might have had after getting the second Green goal in the last minute of the second period. They played 10 minutes of the first 14:03 of the third period killing penalties. Thank your lucky stars, Caps fans, that the team got a point out of this one.

The Good… getting contributions from guys who need to step up (Fehr, Fleischmann) and doing it on a big stage… Green’s tying a modern record for consecutive games with a goal by a defenseman… getting a point when the Caps played long stretches as if they were trying to surrender that second point in regulation.

The bad… not getting the kind of defensive performance from the defensive forwards we’ve come to expect (or been spoiled by seeing so consistently).

The ugly… losing the second point on what amounted to the kind of lucky bounce that happens in hockey games.

Look, the Caps are the better team and shouldn’t have lost this game. I know it, you know it, and I suspect even Larry Brooks knows it (although he seems to think the Rangers dominated the game the way the Canadiens used to dominate the Caps when Scotty Bowman was coaching the Habs). But with Alexander Semin out, Alex Ovechkin fighting through rush hour traffic on the Major Deegan Expressway, there were some good signs from other guys who stepped up.

The defense – front to back – did not have a good night. That is a correctable problem, and we suspect it will be addressed before the team takes the ice in Florida this weekend. Theodore didn’t have his best night, and in an ironic sense, this game is the other bookend of quite a run he’s been on. After he was pulled in this arena the last time these teams met, he was “Jacques Roychuk”* in goal for seven weeks.

Don’t lose sight of the longer term goals here… Yeah, the Caps should have beaten the Rangers, but they are also 4-1-2 in their last seven games. That’s a 117-point pace. That’s the bigger picture here.