The Peerless Prognosticator is ON THE AIR!!! -- Game 16: Penguins at Capitals, November 16th

The Washington Capitals complete their third set of back-to-back games this season on Wednesday night when they return home to face the Pittsburgh Penguins at Verizon Center.  The Caps won both ends of their first back-to-back this season, a 5-2 win over the Vancouver Canucks and a 3-1 win over the Calgary Flames on October 29th and 30th.  They split their next back-to-back, beating the Chicago Blackhawks on Veterans Day in overtime, 3-2, then losing the next evening in Carolina to the Hurricanes, 5-1.  They will be looking for a split of this back-to-back set after a 2-1 overtime loss to the Columbus Blue Jackets last night.

The Penguins will be waiting for the Caps in Washington having won seven of their last nine games. The latest being a 4-1 win over the Toronto Maple Leafs last Saturday night. Scoring has not been a problem for the Penguins, who rank sixth in league scoring offense (3.07 goals per game).  Four players have at least 13 points for the Pens.  No team has more, and only the Chicago Blackhawks and Winnipeg Jets have as many.

Evgeni Malkin leads that group with 15 points overall (8-7-15) and is in the midst of a four-game points streak (2-2-4).  Holding him off the score sheet has become an increasingly rare occurrence. After recording points in three of his first six contests this season (2-3-5), including a goal and an assist in the Pens’ 3-2 Gimmick win on Opening Night, Malkin has points in eight of his last nine contests (6-4-10).  The odd part of Malkin’s scoring is that his total might be higher if he didn’t lead the club in penalty minutes (22).  His total puts him in the top-25 in the league in PIMs.  In 33 career games against the Caps, Malkin is 12-35-47, plus-2.

Finding Sidney Crosby among the league’s points leaders would hardly be surprising. But so far, his 13 points ranks just a tie for 29th place in the league.  Part of that is his having played in just nine games so far, the consequence of missing six games to a concussion to start the season.  But in a somewhat surprising turn, Crosby is tied for second in the league in goals scored (10), trailing only Winnipeg’s precocious rookie Patrik Laine (11).  What has been every bit as remarkable is his consistency, which has been (dare we say it) “Ovechkinian.”  Crosby has goals in seven of the nine games in which he played so far and has three two-goal games, tied with Laine for the most multi-goal games this season.  Crosby is 19-36-55, plus-4 in 38 career games against Washington.

Phil Kessel is among that quartet with at least 13 points so far (Patric Hornqvist is the fourth member of the group).  Kessel’s contribution has been primarily on the power play, where he is 3-6-9, those nine power play points ranked in a tie for second in the league, one behind Philadelphia’s Claude Giroux.  The odd part about Kessel’s power play scoring is that all of his power play goals and all but one of his power play points have come at home.  That’s part of the silver lining for the Caps.  If there is another, it is that Kessel is without a power play goal in his last seven games, in fact without a goal of any kind in seven games.  He is 7-15-22, minus-4 in 36 career games against the Caps. 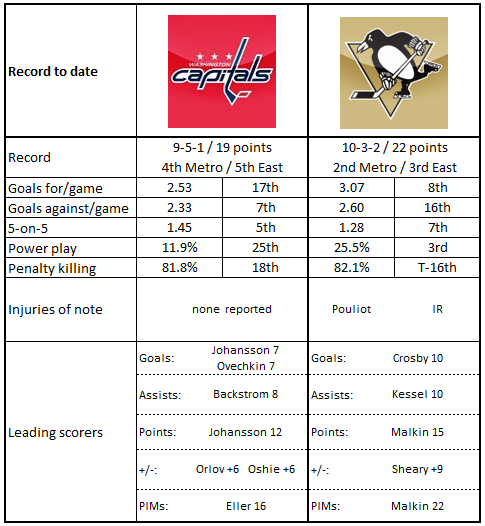 2.  No team has fewer power play goals on the road than the Penguins (2).

3.  With an average age of 28.4 years to start the season, the Penguins were the second-oldest club in the league. They also happened to be the fourth smallest club by average weight, giving away more than seven pounds per man to the Capitals.

4.  The Penguins clamp down on opponents late in games.  No team has allowed fewer third period goals (8) than the Penguins.

3.  On the odd side of the season-to-season comparison, last year at this time, Alex Ovechkin had one power play goal through his first 15 games.  He has two man advantage goals through 15 games so far this season.

4.  The Caps, who spent the first few games of this season almost impossible so score upon in the third period, aren’t clamping down so well in the final 20 minutes overall.  They have allowed 13 third period goals, ranked tied for seventh with four other teams.  On the brighter side, only two teams have allowed fewer first period goals than the Caps (8) – the San Jose Sharks and New Jersey Devils with six apiece.

The line on Kris Letang at tsn.ca describes him as “Excellent, mobile big-minute defenseman, when healthy.”  It is that last part that always seems to be an issue.  Since appearing in all 82 games of the 2010-2011 season, Letang has appeared in 273 of a possible 391 games, missing time to a variety of ailments – upper body injury, wrist, groin, heart ailment.  Despite missing so much time, since the 2011-2012 season, Letang is one of just eight defensemen in the league with at least 50 goals and at least 200 points (he is with 54 and 232).  In doing so, he played 18 fewer games over that span than Brent Burns and a full season’s worth – 82 games – fewer than the player with the next fewest games played, Kevin Shattenkirk.  And, despite appearing in just 10 of 15 games so far this season, he is tied for fourth in most multi-point games by a defenseman (3), one fewer than Duncan Keith, Damon Severson, and Shattenkirk.  Letang is 4-9-13, minus-10 in 28 career games against the Caps.

Before T.J. Oshie came to Washington, he was a competent, if not elite set-up man.  In seven seasons with the St. Louis Blues, he never averaged fewer than 0.39 assists per game.  Last season, he recorded a career low in average assists per game (0.31).  That looks almost Gretzkian compared to his totals so far this season.  Through 15 games, Oshie has two assists – 0.13 per game.  Neither of those assists came on home ice, although both did come in road wins (at Chicago and at Vancouver).  It is an odd counterpoint to his being on a pace to finish with his first 30-goal season (he is on a pace to finish with 33 goals), and five of his six goals have been scored at Verizon Center.  In 15 career games against Pittsburgh, Oshie is 4-3-7, plus-2.

The Caps had to grit their teeth and watch the Penguins hoist their Stanley Cup Champion banner to the rafters on Opening Night.  Then they had to endure a 3-2 trick shot loss that lasted eight rounds before it was decided.  This on top of falling in overtime in a Game 6 in the playoffs last spring.  Makes one wonder what it takes to build up a healthy anger toward this team and, more specifically, how to channel that anger constructively into a win.  The Caps are not playing well at the moment, but there should be no problem in getting up for this game.  It is November, but this game means something.  Will, skill…just win the damn game.