The Peerless Prognosticator is ON THE AIR!!! -- Game 58: Capitals at Blackhawks, February 17th

The Washington Capitals start the back half of their four-game road trip with a visit to the Windy City and a Friday night faceoff against the Chicago Blackhawks at United Center.  The Caps, fresh off their 5-2 win over the Minnesota Wild on Thursday night, are 3-0-2 in their last five games.  The Blackhawks, who lost at home to the Anaheim Ducks, 3-2, on Thursday night, are dragging an eight-game losing streak into this contest (0-7-1), dropping them 12 points out of a playoff spot with 24 games left to play.

For the Blackhawks, the eight-game losing streak is the tail end of a slide that has seen them drop 12 of 14 decisions since January 14th (2-10-2).  The slump has two main features.  One, the Blackhawks can’t score, averaging just 1.86 points per game over those 14 games, and two, they can’t keep opponents from scoring, allowing an average of 3.57 goals per game.  That pretty much covers the big issues.

On offense, the Blackhawks have spread the goals around in their 14-game slump – 13 different players have goals – but no one is providing consistent goal scoring other than Alex DeBrincat, who has seven of the team’s 26 goals in that span.  DeBrincat is having a rookie season worthy of Calder Trophy consideration.  His 21 goals overall ranks third among all rookies, trailing only Vancouver’s Brock Boeser (27) and Tampa Bay’s Yanni Gourde (22).  His 38 points are tied for fifth in this year’s rookie class.  He is the only rookie in this year’s class to record two hat tricks, one in a 7-3 win over the Anaheim Ducks on November 27th, the other in a 5-1 win in Detroit over the Red Wings on January 25th.  When he scored Chicago’s only goal in a 6-1 loss to the Arizona Coyotes last Monday, he became the 16th rookie in Blackhawk history to record 20 or more goals in his rookie season.  He had an assist in the Blackhawks’ 6-2 loss to the Caps on December 6th, his only appearance against Washington to date.

At the other end of the scoring, at least expectations-wise, is Jonathan Toews.  Talk about a slump.  Over this 2-10-2 span, Toews has one goal on 41 shots, a 2.4 percent shooting percentage.  Compare that to the 14 goals on 129 shots he compiled over his first 44 games (10.9 percent).  His shooting drying up is a big reason he has only three even strength points in those 14 games (he also has three power play assists).  Toews does seem to have come on a little bit of late, though.  His shooting efficiency has not improved (one goal on 31 shots), but he is 1-5-6 in his last ten games, and he is still firing shots on net with 16 shots on goal in his last four games.  What is odd about Toews goal scoring this year was how little bearing it seems to have on results.  In 14 games in which he recorded a goal this season, Chicago is just 7-5-2.  Compare that to a record of 13-4-2 when Toews recorded an assist.  Toews is 6-4-10, minus-4, in 12 career games against Washington.

And that brings us to the question… “who is Vinnie Hinostroza?”  You will be forgiven if you don’t know that Hinostroza is tied for second in goals scored in this 2-10-2 slump on which the Blackhawks find themselves.  Those three goals he has in those 14 games doubled his season output to date (six) and matches in 27 games this season the six he had last season in 49 games of his rookie season.  Hinostroza is hardly a household name outside of Blackhawk circles, but the center was a sixth-round draft pick of the Blackhawks out of Notre Dame in the 2012 entry draft.  He had decent, if not outstanding goal totals in previous stops, recording 19 in 76 career games at Notre Dame and 21 in 86 games over three seasons with the Rockford IceHogs of the AHL.  The odd part of his goal scoring profile this season is that only one of his six goals were scored on home ice.  That is a duplicate of last year, when Hinostroza also scored just one of six goals on home ice for the season.  In two career games against the Caps, Hinostroza is without a point and is minus-3. 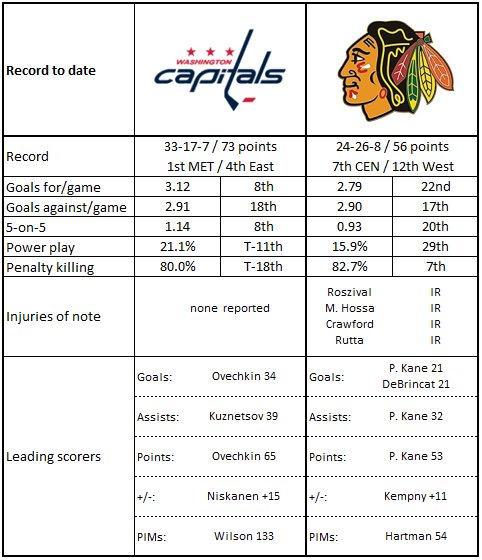 1.  The Blackhawks have the worst record in the league over their last 14 games (2-10-2).  What makes it worse is that their six standings points earned in that span are three fewer than the Columbus Blue Jackets and Edmonton Oilers, despite the fact that Chicago has played three more games than both of those other teams.

2.  Chicago’s shooting percentage over those 14 games (5.3 percent) is worst in the league over that span, nullifying their shots on goal advantage of plus-4.29 per game (34.93 shots on goal versus 30.64 shots on goal allowed).

3.  You have to wonder if the Blackhawks are unlucky lately.  In their 2-10-2 slump, they have a shot attempts-for percentage of 53.16 overall, sixth best in the league over that span (numbers from NHL.com).

4.  And it is not as if the Blackhawks have lacked for special team opportunities.  Their 49 power play chances over this 14-game stretch is second most in the league, and the top team (New Jersey with 55) has played two more games than Chicago.

5.  Even strength offense is killing the Blackhawks.  In this 14-game slump they have only 18 even strength goals, fewest in the league (Buffalo has 21 in 14 games).

3.  If you think of faceoffs as stoppages that interrupt the flow of a game, the Caps have flow.  Only two teams have taken fewer draws that Washington (3380) this season: Carolina (3364) and Colorado (3338).

5.  On the other hand, only Boston (1) and Winnipeg (2) have fewer regulation losses when scoring first than the Caps (3), although the Caps have scored first just 25 times in 57 games.

Corey Crawford has not appeared in the Chicago net since December 23rd, when he was pulled after giving up three goals on seven shots in 13 minutes of a 4-1 loss to the New Jersey Devils.  Four days later he went on injured reserve with an upper body injury.  Since then, Anton Forsberg and Jeff Glass have shared the goaltending duties, and neither has been an answer.  Forsberg is 4-7-0, 3.00, .905 in 11 appearances, and Glass was 3-6-3, 3.31, .898 before being waived earlier this week for the purpose of returning him to Rockford in the AHL (he cleared waivers and was reassigned).

In Glass’ place Chicago called up Jean-Francois Berube, a former fourth round draft pick of the Los Angeles Kings who has 22 games of experience over three NHL seasons, two with the New York Islanders before moving to Chicago.  In his only appearance this season he allowed two goals on 14 shots in a no-decision in 44 minutes of work in Chicago’s 6-2 loss to the Caps in December, his only career appearance against the Caps.  If nothing else, Berube’s recall serves as an object lesson for Caps fans, that Philipp Grubauer should be appreciated for the fine level of play he has provided in a backup role.  Chicago’s goaltending situation with Crawford out might be the single most important reason the Blackhawks miss the playoffs this season, should it come to pass.

Matt Niskanen has had an odd sort of year for the Washington Capitals.  Caps Nation looks at the defense and laments the play of Brooks Orpik, it watches anxiously as rookies Madison Bowey and Christian Djoos race the clock to see if they can develop into reliable contributors in time for the postseason, and it wonders if this is the farewell tour of free-agent-to-be John Carlson.  Meanwhile, there is Niskanen.  He has missed an unusually high number (for him) of games due to injury (14), but when he has been in the lineup, his performance has been, well, Niskanenesque.  His scoring line of 4-13-17, plus-15, through 43 games played is not out of line with his 5-34-39, plus-20, in 78 games last season or the 5-27-32, plus-10, in 82 games the year before that or the 4-27-31, plus-7, he posted in his first year with the Caps in 2014-2015.  What is a bit odd is that he has points in only four road games this season, going 0-5-5, plus-6.  Compare that to his having points in 15 home games this season (4-8-12, plus-14, in those games).

What has been consistent this season is his being a rock in terms of ice time.  The Caps have yet to lose a game in regulation when he logged more than 24 minutes of ice time (10-0-3).  And while there is a school of thought that high hit volumes is a reflection of poor possession, the Caps do seem to do better when he is physically engaged.  They are 19-3-1 when Niskanen is credited with at least two hits in a game this season.  He is 1-9-10, minus-1, in 23 career games against Chicago.

This is one of those games where you might get a good idea of where the Caps’ heads are at.  Yes, these are the Chicago Blackhawks, winners of three Stanley Cups over the past eight seasons.  Yes, this edition of the Blackhawks is fighting for their playoff lives, in jeopardy of missing the postseason for the first time since 2008 and the first time for head coach Joel Quenneville since he came to Chicago.  But this club is crippled.  They can’t score, and they are not getting very good goaltending in the absence of their number one netminder.  It is a club of which the Caps need to take advantage.  Getting a jump early would take the fans out of the game and perhaps kill whatever confidence whichever netminder brings to the contest.  Do that, and a sixth straight game with a standings point would seem to be in order.