The Peerless Prognosticator is ON THE AIR!!! -- Game 64: Senators at Capitals, February 27th

And…exhale.  NHL Trading Deadline Day 2018 has passed and the Washington Capitals, quiet on Deadline Day, head back to the rink to skate the second of a back-to-back set of games.  Tuesday’s opponent, the Ottawa Senators, will be bringing defenseman Erik Karlsson with them after he was the subject of several rumored destinations – including Washington – on Monday.

Once upon a time this season, the Senators were 8-3-5, third in the Atlantic Division, fourth in the Eastern Conference.  That was on November 11th.  Then, the bottom dropped out of the Senators’ season.  Since then they are 13-27-5 and have not won more than two games in a row over that stretch, dating back to November 11th.  It is the worst record in the league over that span of time.   Only the New York Islanders have allowed more goals (169) than the Senators since then (161), and only two teams have scored fewer goals than Ottawa (106) – Columbus (104) and Arizona (103).  They have the second-worst power play since that promising start (14.6 percent), better only than Edmonton (13.5 percent), and only three teams have a worse penalty kill than the Senators since then (74.0 percent).

With offense being sparse, it should be no surprise that the Senators do not have a 20-goal scorer.  Mark Stone could get there with a goal against the Caps, though.  Stone has become a reliable 20-goal scorer in the league, poised to make it four straight seasons with at least 20 goals in what is his fourth full season in the NHL.  Where he is not keeping pace with previous seasons, though, is in power play scoring.  In each of the last three seasons, Stone recorded at least five power play goals.  This season, he has only one power play marker coming into this game, although his power play assist total (nine) is consistent with each of his last three seasons (26 assists with a high of ten in 2015-2016).  Stone is among the most efficient shooters in the league.  Over the past four seasons, including this one, only Evgeni Malkin among 192 players with at least 500 shots on goal has a better shooting percentage (16.6) than Stone (16.0).  He comes into this game on a long hot streak.  Over his last 24 games, Stone is 5-26-31, plus-5, and has been held without a point just five times in that span.  He is 3-2-5, plus-4, in 11 career games against the Caps.

Mike Hoffman is the Senators’ top goal scorer and point producer on the power play this season (6-11-17).  It is not out of the ordinary for Hoffman, who had 22 power play goals over the previous two seasons, including 13 last season, tied for sixth-most in the league.   Those power play goals would seem to mark the good and bad of the Senators’ season.  Three of Hoffman’s first six goals this season came on power plays, including both that he scored in a 4-3 win over the Colorado Avalanche on November 11th in his 16th game of the year that might have been the high point of the Ottawa season.  Since then, though, he is 11-14-25, minus-14, in 45 games, and he has three power play goals.  He is a player, though, who does not seem to take well to heavy minutes.  The Senators are just 3-6-3 when he logged more than 20 minutes of ice time.  In ten career games against the Caps, Hoffman is 2-3-5, minus-2.

Dion Phaneuf was traded to the Los Angeles Kings on February 13th. Erik Karlsson was almost traded on Deadline Day and, with one year remaining on his current contract, seems certain to be moved in the off-season at this point.  Going forward, the Senators might be left to rely on Thomas Chabot as an anchor on the blue line.  In this, his rookie season, Chabot is tied for second among Senator defensemen in points (16, with Codi Ceci, in 19 fewer games), and he is tied for fifth among all rookie defensemen in points (with Samuel Girard).  He has been as close to a good luck charm as the Senators have had this season, the team with an 8-5-0 record when he recorded at least one point.  Chabot has an assist in his only career game against the Caps. 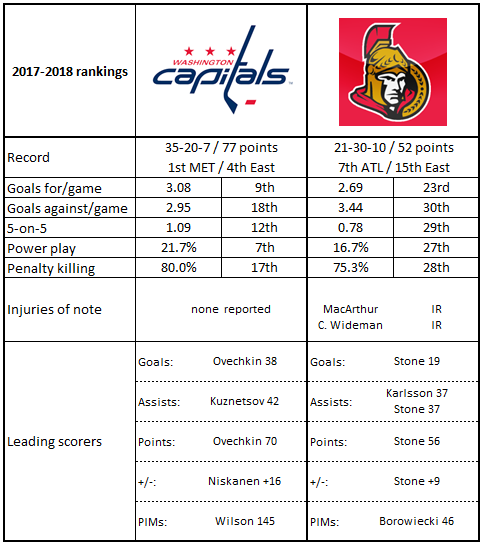 1.  The Senators have already dressed 36 skaters this season, nine of them rookies.  Five of those rookies have appeared in at least ten games.

2.  Bench management has been a challenge for the Senators this season.  No team has more bench minor penalties than the Senators (14, three more than Toronto and Colorado).

5.  Predictably, Ottawa has poor possession numbers.  Their overall shot attempts-for at 5-on-5 is 28th in the league (47.04), and the only situation in which they are over 50 percent this season is when behind…barely (50.45).

1.  If the Caps are to match last year’s total of 19 skaters with double digits in points, it is going to be Brooks Orpik that gets them there.  He has eight points through Sunday’s games, all assists.  No other Capital currently in the organization has more than one point with the team this season (Nathan Walker, Aaron Ness).

2.  Speaking of Orpik… going into Monday night’s game against Columbus, 162 games and counting since his last goal…a whole baseball season.

3.  The Caps are still looking for a 5-on-3 power play goal this season.  They are one of seven teams without one, one of only two in the east (Columbus is the other, at least before Monday night’s game).  That’s ok…Vegas doesn’t have one, either.

4.  The Caps finally lost a game in regulation that they led after two periods last week, but they are still one of only four teams yet to lose a game in regulation when leading after one period, and they have the best winning percentage in those games through Sunday (20-0-1/.952).

It might surprise you to know that Craig Anderson is the third-oldest goaltender to dress in the NHL this season.  Only Roberto Luongo and Ryan Miller are older, and Anderson is ten months older than the New York Rangers’ Henrik Lundqvist.  He is fifth on the all-time list of games played by a goaltender born in the United States (Park Ridge, IL), and he is sixth on that list in career wins (255).  Approaching his 37th birthday (in May), his numbers are off this year compared to last.  His goals against average (3.27) is almost a full goal per game worse than last year (2.28), and his save percentage has dipped 27 points (from .926 to .901).  He has been very streaky this season so far, at least as far as wins and losses are concerned.  Anderson had a nine-game stretch earlier this season, from November 16th through December 9th, in which he went winless, posting a record of 0-7-0, 3.29, .896, and two no-decisions.  He also has two other streaks this season of four or more losses.  That could become a third if he loses to the Caps on Tuesday night.  In 21 career appearances against the Caps, Anderson is 11-8-2, 2.47, .918, with two shutouts.

Last season, Jay Beagle had a career year, and Caps fans might have been spoiled by it.  After a 13-17-30, plus-20 year, six goals and 19 points looks pretty thin in comparison.  However, that scoring line is not out of character for Beagle, once the career year is set aside.  He is 6-13-19, plus-5 going into Monday night’s game against Columbus, which puts him on a pace to finish 8-17-25, plus-7.  Compare that to his per-82 game numbers over his first eight seasons (i.e., before his career year): 8-9-17, minus-3.  What he has done less of this season compared to last is get pucks to the net.  He had an even 100 shots on goal last year, another career high, as was his shooting percentage of 13.0.  This year he has just 54 shots on goal, and even with his fourth straight year shooting better than ten percent (11.1), his goal total is depressed compared to last season.  Beagle is 2-3-5, minus-2, in 17 career games against Ottawa.

The Caps added a couple of defensemen that might be considered third pair types, which is not to say that neither Michal Kempny nor Jakub Jerabek are improvements.  But this is the team that the Caps will take to the postseason.  If there is a silver lining in looking at this roster, compared to the Penguins, Bruins, and Lightning as possible opponents in the playoffs, this team really has not yet put together a sustained stretch of games in some time when they were all pulling in the same direction.  Andre Burakovsky is showing signs of coming out of a season-long funk.  T.J. Oshie has had a devil of a time trying to find the back of the net, but he is coming off a 30-plus goal season.  Evgeny Kuznetsov seems to be a bit more consistent these days.  Caps fans get glimpses of what this team can be, but not enough to be comfortable thinking they can go deep in the postseason.  Perhaps if they can get more, and more extensive stretches of good play from a bigger population of players, the flicker of hope might become a steady flame.  But part of that is dismissing an opponent clearly skating out the string this season.  A loss just isn’t on the to-do list on Tuesday night.

Posted by The Peerless at 7:15 PM No comments: