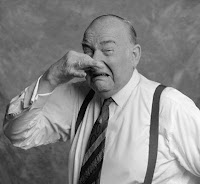 That doesn’t even qualify as a let down. The 6-2 pasting the Florida Panthers laid on the Caps this afternoon qualifies as a “thud-down.” It was the last “Kids’ Day” of the season at Verizon Center, and a more cruel treatment of kids would hardly be imaginable. It was enough to give kids – not to mention players and coaches – nightmares that would last for weeks.

The Caps scored first and last, but in-between struggled with all the things that they have struggled with this year – killing penalties, keeping the puck in the rink, taking a lesser opponent for granted. These were on display in their full grandeur in this one. Florida converted three of six power plays, which is misleading in itself – the Panthers converted the first three opportunities presented to them, then coasted the rest of the way on the man advantage.

As if it wasn’t bad enough giving up three power play goals (four overall) in the first period, the Caps allowed the Panthers a penalty shot before the game was five minutes old, a product of Jose Theodore throwing his stick at the puck. David Booth didn’t convert, but it hardly mattered. 13 seconds after failing to score on the penalty shot, the Panthers scored on the power play, Stephen Weiss doing the deed. Bryan McCabe followed with a power play goal, then Jay Bouwmeester scored what might be his final goal in a Panther uniform. Richard Zednik netted the Panthers’ fourth goal of the period. It would be the last one Theodore would allow, his day being cut short by Bruce Boudreau after 20 minutes.

That ended the competitive portion of the afternoon, the rest being an opportunity for folks to pad their stats and wonder if it would be snowing when they got home…

-- Alex Ovechkin scored his 46th goal in the last minute of the game when Craig Anderson was wondering which seat he’d take on the Florida charter home. Anderson got his glove on the puck, which looked as if it was going high anyway, but it slithered through the webbing and dropped behind him into the net.

-- Nicklas Backstrom extended his consecutive games points streak to ten with an assist on the Ovechkin goal. That makes for a career high for Backstrom.

-- The Caps didn’t lack for attempts. They threw 79 pucks at the Florida net (34 actually made it to Craig Anderson). Florida had 60 attempts (33 shots on goal).

-- March starts as February ends…another delay-of-game for shooting the puck over the glass. If this keeps up, Bruce Boudreau might go all “Lou Brown” on the offenders the way Brown did on Willie Mays Hayes in “Major League”…”the next time you shoot one over the glass, you owe me twenty push-ups.”

-- That’s four losses to Southeast Division teams in regulation this season. That is more losses than the Caps have against any division in the East, despite having played fewer games against the Southeast (13) than they have against either the Atlantic (17) or the Northeast (17).

-- The Caps are now 7-2-0 when Alexander Semin and Alex Ovechkin score goals in the same game.

-- The Caps are now 10-12-1 when surrendering more than five power plays. Florida had six today.

-- That was only the third time this year Florida scored more than five goals. They turned the trick against Atlanta (8-4 on January 10th) and Pittsburgh (6-1 on January 3rd).

-- That was the first time this year Florida scored as many as three power play goals in a game. The last time they did it in regulation was in an 8-0 win over Toronto on February 5, 2008.

The NHL awards three stars of the game for each contest. Had there been 15 stars of the game in this one, it is doubtful a Cap would have been on the list. You could see it from the start, the guys just weren’t moving their feet. They might have been lulled into a false sense of confidence with the Semin goal less than 90 seconds in. Less than three minutes later, the Panthers had an unsuccessful penalty shot and a successful power play. It only got worse from there for the Caps.

The Caps have 11 more games against Southeast Division opponents to close the season. On paper, the Caps should do well. The only paper suitable for the result today, though, was Charmin.
Posted by The Peerless at 8:16 PM 1 comment:

The Peerless Prognosticator is ON THE AIR!!! -- Caps vs. Panthers, March 1st

We’re here in what will be, by the end of the day, snow-bound Washington (or so say the forecasters, which probably means flurries) for a Marquee Matchup, a Southeast Showdown, a Backyard Brawl between the Caps and the Florida Panthers. The Caps, fresh off a 4-3 overtime win against Boston, returns home for this, the penultimate back-to-back of the season (the last one comes up March 16-17).

Before we get to the fun, there is a lot going on this weekend, and we have a full mail bag, so let’s get to it…

The wife is nagging me again. She says ‘you never play anymore’ and ‘we can’t go anywhere because you suck and fans hate you,’ and ‘don’t even think of accepting a trip to Edmonton.’ What do I do, Peerless? I’m losing what’s left of my hair.

Long time reader, first time commenter…I can’t sleep. All night, I’ve been thinking of Washington, of Montreal, of Boston. But I’ve been in a cold sweat thinking about Pittsburgh. I don’t even like Primanti’s. Is there something I can do to make the voices stop saying “Pittsburgh…Pittsburgh…?”

Signed,
Please, vote me off the Island as fast as you can

Please, I share your pain. Parents raise their kids warning them that if they don’t do their homework, they’ll end up in Pittsburgh. That they should clean their plates because there are starving kids in Pittsburgh. That if they don’t get to sleep of Christmas Eve, they’ll get a Sidney Crosby poster in their stocking. Just find a happy place (say, 7th and F Street) and think good thoughts…like, passes from Backstrom.
**********

I don’t wanna go to Pittsburgh, either. They suck almost as bad as we do.

If you thought folks hated you in these parts, wait ‘til you wear black and gold. You won’t get out alive on March 8th. You might try hiding behind Vinnie for the next few days.
**********

We saved our season! We found our winger!!

Signed,
Ray at the Confluence

It would be cliché to say that this afternoon’s game is dangerous. The Caps beat a fierce rival that they might see in the playoffs yesterday, and the potential for a let down is considerable. The motivation here is that a loss means they will have squandered the opportunity they provided for themselves by scratching out an extra point against the Bruins.

Florida is the kind of team that can make an opponent pay for lack of focus. In fact, they are especially suited to the task. Their defensive abilities can take a good offense off its game under the best of circumstances, but if that opponent isn’t focused on the task at hand, Florida can make their afternoon miserable. The numbers bear this out… 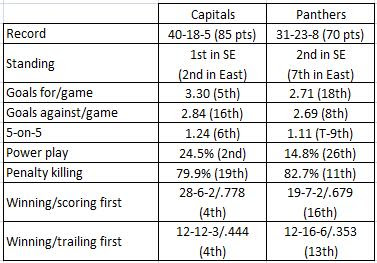 What is evident is that the Panthers, while still fighting for a playoff spot, have the sort of goals-against and penalty killing numbers a playoff team has to have. That they struggle is a product of a middle-of-the road offense and an unproductive power play. The mediocrity has crept into their results of late, as the Panthers have alternated wins and losses over their last eight games after winning five of six to start February.

That eight-game streak is instructive. In the four wins, the Panthers allowed a total of two goals (two shutouts, two one-goal results). In the four losses, they allowed a total of 21 goals. Jekyll, meet Hyde. And it has revealed a problem the Panthers probably weren’t anticipating – inconsistency in goal. Tomas Vokoun played the first five games of the eight, posting a record of 3-2-0. He had two shutouts (against New Jersey and Boston, no less) and a one-goal effort against the Rangers. But he allowed four goals each to Washington and Chicago. Craig Anderson got the call in the last three games of the month, going 1-2-0. He won with a 2-1 effort over the Rangers, but that was sandwiched by games against Boston and New Jersey in which he allowed a total of 13 goals.

Working our way outward, the Panthers have a bit of controversy on their hands, too, having sent defenseman Nick Boynton home for a few days of time out after he was benched in the third period of a 2-1 win over the Rangers last Thursday. It seems to have involved a bit of a verbal dust-up between player and coach, so we’ll see where this ends up. He won’t be playing this afternoon, though.

After that, we’re still left with “Days of Our Bouwmeester.” Will the defenseman sign a new deal with the Panthers (not likely)? Will he be dealt to a contender for a bushel of players, prospects, and/or picks (it had better be a bushel and a half)? Will he be kept for a playoff run, the team knowing full well it will be his farewell tour (we’re betting on this one, short term needs trumping long term ones…this team needs a playoff appearance to sell tickets, although at this time next year, count on fans to whine about not having moved him for assets). He’s still the best defenseman for the Panthers and probably, with apologies to fans of Mike Green, for the entire division. We’d just as soon they traded him in the next hour or so.

What the Panthers aren’t getting is scoring from their scorers. Stephen Weiss lead the club in total scoring. His February production was decent, but perhaps not what you’d expect of a top scorer: 2-8-10, even, in 13 games. David Booth – second in scoring for the Panthers – was only 1-4-5, +2, for the month. And Nathan Horton, who just doesn’t seem quite able to get over that developmental hump to become the dominant player envisioned when he was drafted third overall in 2003, was 5-4-9, -1, in 13 games for the month.

Stillman has a history here. He is 11-22-33, +4, with five power play goals and three game-winners in 35 career games against the Caps. On a team that is struggling for any offensive consistency, he’s got to play the role of “veteran” today. The problem is that he is “day-to-day” with an ankle injury suffered at practice on Thursday. If he’s out, where does Florida’s offense come from?

Steckel is something of a metaphor for this game. Florida isn’t a team with a lot of offensive pop, so you don’t want them to get the confidence to think otherwise. That means tending to business on defense. Steckel is an adept penalty killer (the Caps killed 85 percent of their shorthanded situations in February) and faceoff man (in his last ten games of the month, Steckel was on the low side of 50 percent only once). If the Caps are to keep their focus, chances are we’ll know that by how well they play defense, and that is as important for forwards – like Steckel – as it is for defensemen and goalies.

The Caps can drive the last nail into the coffin of the Panthers’ chances of catching the Caps for the Southeast Division title with a win here. A regulation victory would give leave the Panthers 17 points down with 19 games left on Florida’s schedule. You wouldn’t like their chances.

This game probably isn’t going to be pretty, but they don’t have to be from now on. In the words of Oakland Raider owner and deranged personnel manager Al Davis, “just win baby.”