“I actually thought that they provided a lot of speed for [Ovechkin] and could maybe back the ‘D’ off.  And to get back to balance. Obviously, during the course of a game you can change it back and go through combinations. But I liked our balance.  I guess I’m still learning. I like having north/south guys with him.  Maybe sometimes with the other guys they might try and get too creative. And at the time when I did it [Sunday] we needed creativity. We needed something. We needed a spark. We need a goal. As opposed to just maybe being more relentless as a team going north. And I think playing with Joey and Beags they’re going to go north more.”

That was head coach Adam Oates talking about experimenting with Alex Ovechkin playing with Jay Beagle and Joey Crabb in the 2012-2013 season.   It was an experiment that did not last, which is not to say it would not be repeated, at least with Beagle.

It was.  Here is how we described it when it happened in March…

"Something strange happened in the second period of the Capitals’ game against the Toronto Maple Leafs on March 16th. It started when Dion Phaneuf scored for Toronto 8:05 into the period to bring the Leafs to within 3-2 of the Caps. Jay Beagle found himself on the ice on the next shift, but came off when Jack Hillen took a penalty 27 seconds after the Phaneuf goal. Then, having seen that penalty killed off, Beagle went off himself on a penalty a minute after the Hillen penalty expired. The Caps killed that penalty, too, but on Beagle’s next shift he, who started the game centering a line with Dustin Penner and Tom Wilson, had new linemates – Alex Ovechkin and Marcus Johansson – 15:33 into the second period.

"Except for power plays, that Beagle-Ovechkin-Johansson line would remain intact for the remainder of the game against Toronto, then be left intact almost for the entirety of the Caps’ road trip to California. For Beagle it has no doubt been exciting, but not for his numbers. Consider that over a five-game period ending with that game against Toronto, Beagle had a cumulative Corsi-for percentage at 5-on-5 of 61.2, while in his three full games centering Ovechkin that number dipped to 40.9. Sure, there are factors to consider such as meshing with an infrequent linemate, facing superior opponents bent on defending Ovechkin, etc. But is this experiment in matching such different players working? One could say that “results matter,” and at this time of year that is as important as it gets. But was the Caps 2-0-1 run through the Golden State a product of anything Ovechkin or Beagle did as linemates, either at the offensive or defensive ends?"

That experiment last through all or part of eight games, from that game against Toronto until the Caps hosted Dallas on April 1st.  Neither Beagle nor Ovechkin had an even strength point in that span.  You can try to race a pickup truck at Indianapolis, and you can try to haul mulch in a Lamborghini.  Neither vehicle is suited to those respective tasks.  Perhaps it wore off on Beagle a bit, though.  His performance numbers were much better late (4-4-8 in his last four ten-game segments).  It helped that he actually played all 42 of those games, though (the last set encompassing the last 12 games of the season).  Beagle did not dress for 20 of the first 25 games of the season.  Why?  Who knows. 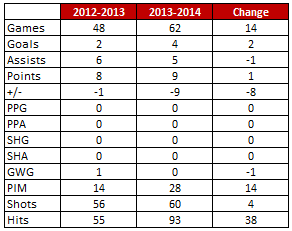 Cheerless’ Take… Four goals and nine points is not something to get too worked up over, cuz. He also was a minus-7 in penalties drawn/taken differential (tied for worst among Capitals forwards), so his grinding was not getting under the skin of too many opponents.

Odd Beagle Fact… Beagle was something of a self-supporting scorer in one respect. He had points in eight games this season and was “even” or better in all of them (plus-6 overall). The Caps were 6-0-2 in games in which Beagle registered a point. Only three times in the 54 other games in which he did not have a point was he a “plus” player. That’s pretty much the definition of secondary (or tertiary or quaternary) scoring.

Game to Remember… April 11th versus Chicago. Even when a team is out of playoff contention, there is something to be said for playing for pride and seeing a hard worker get rewarded. That was the case on April 11th when the Capitals took the ice to host the Chicago Blackhawks at Verizon Center. Things got started for the Caps on the right foot early when Alex Ovechkin scored on a power play just 2:04 into the game. Seven minutes later, though, the Caps added a goal from an unlikely source. The play started with Evgeny Kuznetsov skating the puck around the back of the Chicago net. When he popped out the other side to goalie Corey Crawford’s left, he found Dmitry Orlov at the top of the left wing circle. Orlov faked a slap shot and threaded a pass to Jay Beagle in the low slot to Crawford’s left. Beagle got two whacks at the puck, the second of which found the back of the net to give Washington a 2-0 lead.

After Nicklas Backstrom gave the Caps a 3-0 lead early in the second period the game settled into a routine for almost 15 minutes of clock time. An innocent looking enough play would change that as the period was winding down. Jason Chimera threw the puck cross rink from the right wing boards off the left wing boards where Beagle circled to retrieve it. As Beagle was heading up the left wing wall he backhanded the puck deep. Joel Ward picked it up in the corner and forwarded it to Chimera behind the Chicago net. As this was going on Beagle completed the circle, turning into the slot and heading for the net. As two Blackhawks chose to go after Chimera, the path to the net was clear, and Chimera found Beagle darting past Patrick Sharp. Beagle one-timed the puck through Crawford’s pads, and the Caps had their final 4-0 margin. For Beagle it was his first two-goal game in the NHL.

Game to Forget… October 16th versus New York Rangers. The Caps were coming off a 4-2 win at home over the Edmonton Oilers. For Beagle that game was the typical stuff of a fourth liner. He did not have a point, but in 10:37 of ice time he had three shot attempts (one on goal), two hits, a takeaway, a blocked shot, and he won four of seven draws. Then the Rangers came to town… on Beagles’ birthday (his 28th). Beagle got only ten shifts (only two in the third period), played just 7:14, had only one shot attempt, no hits, no takeaways. Not even winning all six draws made it a game for the scrapbook, not to mention the Caps lost, 2-0, their third straight shutout at the hands (gloves, pads, blocker) of Ranger goalie Henrik Lundqvist.  Happy Birthday.

The whole “Beagle and Ovechkin” thing was an unnecessary side show. The fact is – and the basis for evaluation is – first, did Jay Beagle make positive contributions to this club in 2013-2014 as a fourth liner? Second, are those contributions the stuff on which he can build, or is this all there is? As to the former, Beagle’s contributions were rather meager. One does not expect a lot of offense out of his position, and expectations were confirmed. Nine points in 62 games is rather light, even for a fourth line center. Absent much offensive punch, was he a stopper on defense? Not really. Of 147 centers playing in at least 75 percent of his team’s games, Beagle was 131st in Corsi-for percentage at 5-on-5, 137th in shots-for percentage.  He was 128th in Corsi-for percentage in 5-on-5 close score situations, 131st in shots-for percentage. So, was he a reliable penalty killer? Among Caps forwards playing in at least half the team’s games Beagle finished eighth in average penalty killing ice time per game (0:54).

As to the latter, whether this is all there is, one cannot help but think it is. Beagle will turn 29 just after the start of the 2014-2015 season opener, and he has more than 200 games of regular season and playoff experience with the Caps (215).  The episode of Beagle repeating his pairing with Ovechkin aside, does Beagle have the potential to be a contributing fourth liner for this team going forward?

Photo: Justin K. Aller/Getty Images North America
Posted by The Peerless at 6:16 AM No comments: