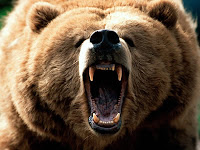 The Hershey Bears tied an AHL record last night with their 19th straight home victory, a 4-1 win over the Lake Erie Monsters.

The Bears have not lost on Giant Center ice since dropping a 5-4 Gimmick decision on November 28th. Since that time they have mauled opponents mercilessly in 19 games to the tune of 110 goals for, 40 against. And as if to make the point of their home ice dominance more emphatically, 14 of those 19 wins have come by at least three goals. Only four times have they won by a single goal, and each instance they followed it up with a win of at least three goals.

15 times in 19 games the Bears have registered at least five goals in this run, and six times they have scored at least seven goals in a game. On the other side of the ledger, only six times has an opponent scored more than two goals on Giant Center ice, and only once was it done in consecutive games.

12 different teams have visited Giant Center in this run, and all have left defeated. Wilkes-Barre/Scranton has been the unfortunate victim of the most losses in this run, losing three times to Hershey (by a combined score of 17-6).

Individually, the roster’s offensive statistics look like the results of a pinball session… 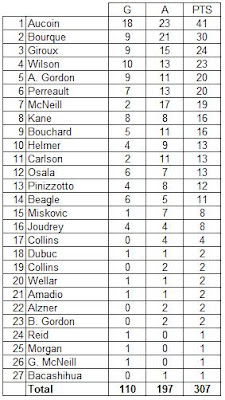 Four goalies have shared in the 19 wins. Only once was a goaltender pulled (Jason Bacashihua, in a 5-4 Hershey win on December 5th).

They go for the record tonight when the Albany River Rats visit Giant Center. Albany is among the victims in this streak, dropping an 8-3 decision to the Bears on January 30th. You would almost think that the last three months at Giant Center would be a subject for a National Geographic documentary – “Bears Gone Wild”
Posted by The Peerless at 9:52 PM No comments: