The Peerless Prognosticator is ON THE AIR!!! -- Game 14: Hurricanes at Capitals, November 8th

For the second time in a week, the Washington Capitals head back to D.C. after skating on the road to face the second half of a back-to-back set of games at Verizon Center.  Last week it was a game in Tampa against the Lightning on Saturday followed up by a contest with the Arizona Coyotes the following night downtown on F Street.  This week it is a Friday tilt in Chicago against the Blackhawks followed by a quick trip back to Washington to face the Carolina Hurricanes at The Phone Booth.

The ‘Canes are coming into the second half of their own set of back-to-back games, having beaten the Columbus Blue Jackets in Raleigh on Friday night.  Oddly enough, that contest against Columbus was the back-half of a home-and-home set of games against the Blue Jackets.

It will not be Ward facing the Caps, though.  Coach Bill Peters said last night it would be Anton Khudobin getting the call for Saturday night’s game.  Khudobin has not had the spark after a slow start the Ward has had, with a record of 0-3-1, 3.24, .891 in his four appearances so far.  He has not appeared in a game since October 24th, when he allowed five goals on 28 shots in a 6-3 loss to the Edmonton Oilers.  Khudobin is 3-1-0, 2.74, .913 in four career appearances against Washington.

If there is a Hurricane to watch in this game, it will be Elias Lindholm.  The fifth overall draft pick in 2013 is 4-2-6 in the Hurricane’s four-game winning streak, including the game winning goal in three of the wins, one of them the overtime winner last night against Columbus.  In three appearances against the Caps in his young career, Lindholm has one goal on one shot.

Here is how the Caps and 'Canes compare so far this season: 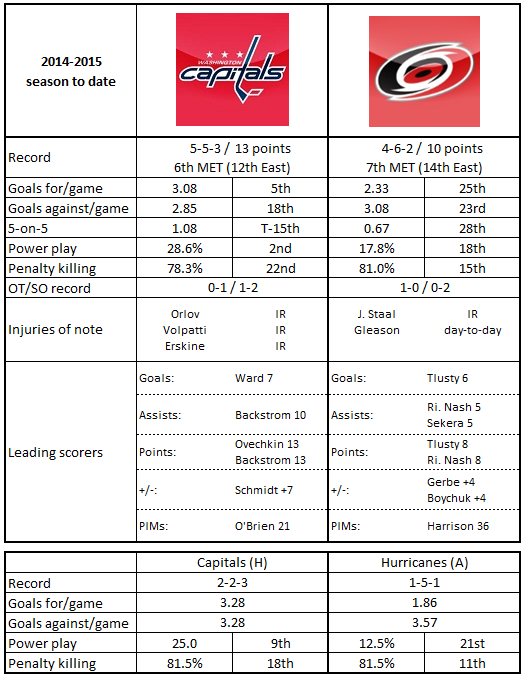 1.  Whatever Carolina’s recent good fortune, they have lost each period so far this season, outscored by 10-8 in the first period of games, 14-9 in the second, and 13-10 in the third period.  In that four-game winning streak, however, the profile is different, outscoring teams 5-1 in the first, 5-3 in the second, and holding them even in the third, 2-2.  Carolina has the only overtime goal, that coming last night against the Blue Jackets.

3.  Last night was the Caps’ second win of the season when not scoring a power play goal, their first in regulation time.  They are 2-1-1 in such games.

4.  The Caps improved to 2-3-3 in one-goal decisions, but that just means they are still 29th in the league in winning percentage in such games, with only Colorado behind them.

5.  Last night was the first time that the Caps allowed 40 shots in a game this season.  Last season they allowed 40 or more shots 13 times with a 7-4-2 record in those games.

No goals, three assists, three points, three more seasons at $7 million per after this one.  Not exactly a “value” player, eh?  Alexander Semin has been all but invisible in ten games so far this season.  He has been a healthy scratch twice in his last four games.  He did manage an assist against Columbus last night, he first point since he recorded two assists against the New York Islanders in Game 2 on October 11th.  It is part of what looks to be a slow air leak in his production ever since he arrived in Carolina.  After he closed the 2012-2013 season fast with three goals in his last four games, he has 22 in 75 games over the last two seasons, not exactly what Carolina fans might have had in mind when he was signed away from the Capitals.  In nine career games against the Caps, Semin is 2-5-7, minus-2.

The Caps sign two big-name free agent defensemen.  Mike Green enjoys a resurgence from the blue line.  John Carlson and Karl Alzner have their faithful fan followings.  Dmitry Orlov is recuperating from a broken arm.  Meanwhile, there is Nate Schmidt, plugging along.  He is not getting a lot of ice time (14:30 a game, sixth among the regular six defensemen), but he is managing it well.  He does not have a point (the only one of the regular six without one), but he is a plus-7, best on the team, and he has been on ice for only five goals against, again best on the team.  Not every defenseman is an Erik Karlsson (or a Mike Green) in the offensive end, and not every defenseman is Shea Weber in the defensive end.  Some guys are effective without anyone knowing about it.  Consider yourself informed.

Carolina is playing well, doing it with an improved defense.  That will be tested tonight when Anton Khudobin steps between the pipes in place of Cam Ward.  At the other end, the Caps had a good win against the Chicago Blackhawks on Friday night, but it was hardly a win in the manner the coaches would have drawn up – a three-goal offensive burst in the last five minutes of the third period while being otherwise dominated by the home team to the tune of 40 shots and a 2-to-1 disadvantage in shot attempts.  This is an opportunity for the Caps to get back on track with their game plan in the first of a three-game home stand.  Sounds like an idea…

Posted by The Peerless at 8:31 AM No comments: 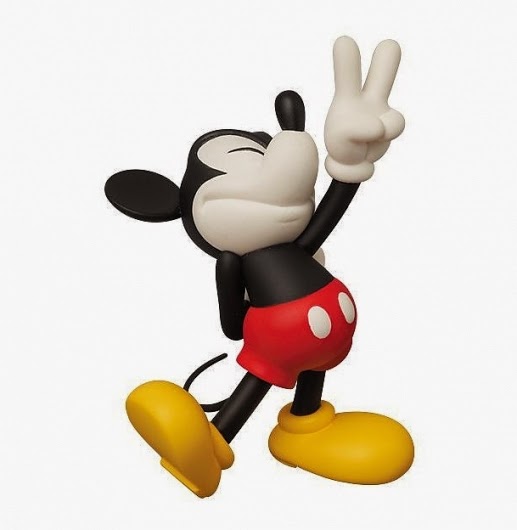 The Washington Capitals thumbed their nose at Corsi.  They gave the middle finger to Fenwick.  Then they used a three-goal burst in a span of 4:52 late in the second period to catch and pass the Chicago Blackhawks to give them the winning margin in a 3-2 win at United Center on Friday night.

It did not have the look of a winning evening for the Caps as the game began.  The teams went scoreless for the first 17 minutes of the first period, but the Blackhawks had the better of the play, outshooting the Caps to that point, 14-8.  On their 15th shot of the period, Brandon Saad finished a 2-on-1 rush with Marian Hossa to give Chicago a 1-0 lead at the first intermission.

Less than a minute into the second period, Duncan Keith celebrated his 700th NHL game by slamming a rebound of a Brad Richards shot past goalie Braden Holtby on a power play to make it 2-0, Chicago.  At that point it looked as if the Caps were going to go quietly to their sixth straight loss.  Through 15 minutes of the period the Blackhawks enjoyed that two goal lead and a 24-14 edge in shots on goal.  Then, things took a turn.

As the clock ticked down to the five-minute mark of the second period, Marcus Johansson stole a pass in the Capitals’ zone and fed Andre Burakovsky at the Caps’ blue line.  With Chicago defenseman Brent Seabrook having pinched in on the play, Burakovsky took off with Troy Brouwer on what became a 2-1on-1 break with oply Keith back for the Blackhawks.  As Burakovsky and Brouwer broke into the Chicago zone, Keith laid out to deny Burakovsky a passing lane to Brouwer.  Burakovsky then called his own number and wristed a shot over goalie Corey Crawford’s glove and under the crossbar on the far side to halve the Blackhawks’ lead.

Four minutes later the game was tied.  The Caps worked the puck in deep, Marcus Johansson spinning it around the end boards from the left wing wall.  Brouwer was there to accept the puck, then send it in front to Burakovsky, whose shot was muffled in front.  The puck slid out to Matt Niskanen at the top of the right wing faceoff circle.  His shot attempt rolled off his stick but right onto that of Johansson who turned and fired the puck past Crawfoed’s right pad to tie the game with just 47 seconds left in the second period.

That might have been how the teams went to the locker room for the second intermission.  The Caps kept up the offensive zone pressure, though, and it was rewarded just before the horn at the end of the period.  It began with Joel Ward behind the Chicago net sliding the puck to Jason Chimera in the corner to Crawford’s right.  Chimera sent the puck out to Karl Alzner at the left point, and Alzner relayed it to Matt Niskanen at the right point.  Niskanen had nothing but open ice to wind and fire, and his shot was tipped by Ward over Crawford’s glove to give the Caps a 3-2 lead with just 4.4 seconds left in the period.

The Caps then put the game in Holtby’s hands, and the goalie, who had been struggling in the face of low shot volumes, stopped all 13 shots he faced in the third period to preserve the 3-2 win and end the Caps’ losing streak at five games.

-- The 40 shots on goal for Chicago is a high for shots allowed this season by the Caps, only the second time that they allowed more than 30 shots in a game, and the first time they allowed a team more than ten shot in each period.

-- Andre Burakovsky broke a personal three-game streak without a point with his goal and assist.  His performance lifted him into second place in scoring among NHL rookies (3-7-10).

-- Marcus Johansson’s two points (1-1-2) made it four straight games with points (3-3-6).  His goal was his sixth, leaving him tied for second on the club with Alex Ovechkin.

-- Joel Ward took over the team lead in goals with his game-winner, his seventh overall and his second game-winning goal of the season, which also leads the team.

-- What does Barry Trotz think of Nicklas Backstrom’s game apart from his offense?  With the Caps nursing a one-goal lead, Backstrom played 5:38 of the last 11 minutes of the contest and 2:33 of the last 3:19.

-- Brooks Laich returned to the lineup for this game and skated a modest 12:54 in ice time.  The odd part of that was a stretch in the second period in which on three consecutive shifts he skated six seconds, eight seconds, and seven seconds.  By the third period, though, he was skating a more normal load, finishing the last 20 minutes with 5:16 in ice time.

-- The Caps held the Blackhawks without a goal in the third period.  It was the first time the Caps shut out an opponent in the final period since they did so in a 3-1 win over Calgary back on October 25th.  In the five games following that win, all losses, the Caps allowed a total of nine goals in the last period.  The Caps are 4-1-0 when holding a team scoreless in the third period, 1-4-3 when they do not.

The Caps are Team Contrary when it comes to possession numbers in their first 13 games.  They were “playing” the right way in their five-game losing streak but getting no reward.  Against the Blackhawks the home team carried play for most of the game, but the Caps had that one burst at the end of the second period to carry the day.  In that respect it was Braden Holtby’s night to shine.  Having played inconsistently in recent starts, Holtby shook off goals on consecutive shots at the end of the first and the start of the second period and slammed the door on any further Chicago hijinks.  It might not have been the way the coaching staff drew it up, but it is a just reward for a team that was frustrated in recent games while winning the fancystat wars.  There is balance in the realm of hockey.

Posted by The Peerless at 1:12 AM No comments: