Countdown to Opening Night by the Elements: Number 27

Another day, another element ticked off Fearless’ walk through the periodic table…

Cobalt derives its name from the German, “kobold,” which means “goblin.”  It is another of those elements that was “known” before it was “discovered.”  In ancient civilizations of Egypt and Mesopotamia minerals that contained cobalt were used to give glass a deep blue color.  As time went by there were those who thought the element giving glass that blue color was bismuth.

Georg Brandt, a Swedish chemist (we seem to have come across a number of Swedish chemists in this review), had other ideas.  Brandt would become the first to be attributed with the discovery of a new metal, all the ones known to that point in time (the mid-1730’s) having been long ago used by humans, their discoverers lost to history.

Cobalt in its free and most stable form is an element formed in the furnaces of supernova creation.  It is not native to earth, being deposited on the planet by meteor strikes.  In addition to its stable form, it has 22 radioisotopes.  One of them – Cobalt-60 – is a gamma-ray radiation source that has been used in a variety of medical and health applications: radiotherapy, sterilization of medical supplies and medical waste, cold pasteurization.

Cobalt is also essential to healthy bodily function.  It is the central metal ion in vitamin B-12, which is vital in the normal function of the brain and central nervous system.  It is also a substance involved in DNA synthesis and a variety of metabolic processes.

Among its other uses, cobalt can be found in lithium and nickel-cadmium batteries, metal alloys that need to stand up to stress (gas turbine and jet aircraft turbine blades, orthopedic implants, high-speed drill bits), and in steel-belted radial tires to improve their gripping performance.  And, there is still its long time use as a pigment – cobalt blue and cobalt green – often in glass or with porcelain.

What you have is an element that is uncommon, even unnatural (given its production in stars), but one that is essential for good health.  In some forms in is a high-energy substance owing to its radioactivity.  And, in its more stable form has applications in which it responds reliably to stressful situations.  It might be like a hockey player coming from another organization who might be characterized as something of a goblin (an evil or mischievous creature of legend), who is strong and energetic (perhaps even colorful), and who stands up for teammates when things get stressful on the ice.

Cobalt…the “Michael Latta” of the periodic table of the elements.

Posted by The Peerless at 8:06 PM No comments:

Theme: “There comes a time when all the cosmic tumblers have clicked into place, and the universe opens itself for a few seconds, to show you what is possible….”
-- Terence Mann (in “Field of Dreams”)

Going into the 2012-2013 season, Troy Brouwer was building a reputation for being a hard-nosed forward who could chip in the occasional or timely goal from the second or third line.  It might have been the “hard-nosed” part that had particular appeal to the Caps when Washington traded the 26th overall pick in the 2011 entry draft for Brouwer in June 2011.  In his first year with the Caps, Brouwer finished seventh in the league among forwards in hits.  It was the third straight season in which he finished in the top 15 in that statistic, following a rookie season in which he finished fourth among rookies in hits.

His goal-scoring, coming as it did from the second line and the first unit on the power play, provided some of the depth of scoring that the Caps have lacked from time to time and took some of the man-advantage scoring burden off of Alex Ovechkin.

I used that quote above in the 2012-2013 preview for Brouwer.  It was used in another context.  This time around it fits for those “few seconds.”

The “few seconds” in cosmological time might correspond to an NHL season.  An abbreviated one, mind you, but one in which Troy Brouwer would score goals (33) at almost twice his career per-82 game rate going into the season (17).  And, although Brouwer was very efficient as a shooter (17.1 percent shooting percentage), it was not a career year for him in that regard.  He shot to a 19.0 percent rate in 2009-2010, when he had 22 goals in 78 games in the Chicago Blackhawks’ run to the Stanley Cup.

The Big Question… Was last season a sustainable new normal or merely a blip in the career statistics for Troy Brouwer?

On the one hand, Caps fans might like to look at Troy Brouwer and his 19 goals 47 games of the 2013 season (a 33-goal pace over 82 games) and see a “Mike Knuble,” who did not reach 20 goals for a full season until he was 30 years old, then ran off eight straight 20-plus goal seasons (averaging 27 a year).  Brouwer just turned 28 years old.  In this scenario he might be about to embark on the prime scoring years of his career, which would be great news for Caps fans who would like to see a bigger threat coming out of that second line.

On the other hand, if you head over to hockey-reference.com you will see that his primary comparables in production over the first seven years of his career are Shawn Burr and Paul Ranheim.  If they really are comparables, Caps fans might not be as happy.  Burr had his career season (24-32-56) at age 23 with the Detroit Red Wings (that was in 1989-1990, before the Red Wings got good).  Ranheim had his best years, goal-scoring wise, at 26 and 27 years old when he recorded a total of 44 goals over the 1991-1992 and 1992-1993 seasons with the Calgary Flames.  He never had more than ten goals in any season after that.

Of greater import, though, is how he will mesh with another new center.  Mikhail Grabovski is not the playmaker Mike Ribeiro was, and this could have consequences for Brouwer’s even strength production.  If Grabovski scores more on his own than Ribeiro, this is not likely to be a problem.  Still, the nature of Brouwer’s production in the 2013 season makes him one of the bigger question marks of the coming season, leaving Caps fans to ponder if it was his career year or the harbinger of a step up on his career path.

Countdown to Opening Night by the Elements: Number 28

Four weeks to go…28 days.  That brings us to Fearless’ look at chemistry for today… 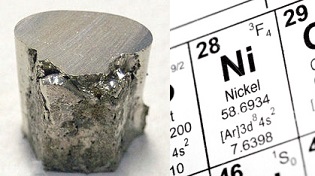 Nickel is one of those elements that has been hiding in plain sight for centuries.  Often mistaken of silver (it has a similarly bright silvery white appearance), it has shown up in materials dating back more than 5,000 years.  In China 3,500 years ago, it was referred to as “white copper.”  It was not until the middle of the 18th century, though, that nickel in a pure form was produced, and that was almost by accident.

While mining in Germany centuries ago, a red ore was found that had the appearance of copper.   The trouble was, try as they might to extract the copper from the ore, the miners found none there.  They blamed the problem on a mythical sprite – “Nickel” – and named the ore “kupfernickel (“kupfer” being a word meaning “copper”).”  It would not be until the mid-18th century that Axel Fredrik Cronstedt, a Swedish chemist, extracted nickel from the “kupfernickel,” even though what he was trying to do was extract the “kupfer.”  It was this, among other contributions to mineralogy, that resulted in Cronfeldt being memorialized in the John Joseph Griffin masterpiece, "A Practical Treatise on the Use of the Blowpipe, in Chemical and Mineral Analysis.”

These days, nickel can be found in a number of products and processes – rechargeable batteries, fuel cells, stainless steel, metal alloys requiring a corrosion-resistant element, tubing used in desalinization processes, electroplating, and as a coating agent to protect other metals.  It used to be widely used in coins, but has been replaced in large part by cheaper materials.

When found in larger pieces, nickel is not a particularly reactive material.  But in its pure form and machined into a fine powder, it can be quite reactive.  It is often found in combination with iron, and in fact it is this nickel-iron mixture that is thought to be the main constituent of the earth’s inner core.  In compounds it can take on a variety of colors – red, blue, yellow – depending on the compound.  In fact, it is often used as a pigment, lending a green color to glass.

So there it is.  An element that can be dormant chemically in most situations, but reactive in special conditions, an element that has uses that lend strength and protective qualities, yet an element that has decorative purposes quite apart from its usual applications.  Sort of like a hockey player who plays a modest role in most situations, but who can stand up for his teammates; a player who has unusual talents not normally associated with his regular play (say, as a shootout specialist); a player who was paid a modest salary, but who was replaced by cheaper players when he became a free agent; a player who has worn sweaters of red, and now of blue and yellow colors.

Nickel…the former Cap “Matt Hendricks” of the periodic table of the elements.

Posted by The Peerless at 12:19 AM No comments: