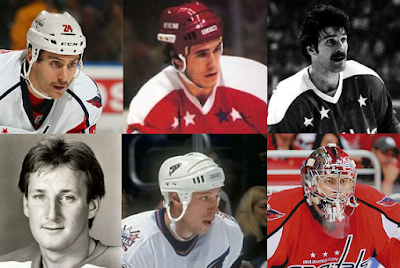 When we published the All-Team V version of the All-Alphabet Team, we asked, “’V’ for victory?”  We were not convinced the answer would be in the affirmative.  Part of the problem was so few players to select from – we had to take one player whose last name ended with the letter “V.”  What we were left with was this:

This team is a bit of an odd one.  On a per-82 game basis, there is some decent scoring punch.  Chris Valentine averaged 34-41-74 per-82 games over his 105-game Caps career, while Dennis Ververgaert averaged 15-28-43. But on the left side, Aaron Volpatti was all but absent on the offensive side of the ice (one goal and three points in 60 games with the Caps when the team was published).

The defense has some offensive life in it with Dmitri Mironov averaging 4-20-24 per-82 games as a Capital and Darren Veitch averaging 6-30-37.  And, these two have the most experience among the skaters with the club with 155 and 319 games, respectively.  On the other hand, they and their forward teammates have next to no postseason experience, six games in all (Valentine with two, Mironov with four) and no points scored.

There would seem to be opportunity for replacement on the All-Team V squad, and there is an obvious solution at left wing.  In place of Volpatti we insert Jakub Vrana.  Despite having played in only 245 games over four seasons with the club, Vrana ranks seventh in goals scored since the original team was published in 2014 (65), 12th in points (132), tied for 11th in power play goals (six), eighth in power play points (23), and sixth in game-winning goals (14), despite ranking just 14th in games played among skaters (245).  Vrana’s presence makes this forward line more balanced and more formidable.  Given the absence of other possibilities under this letter, he would be the only replacement among the skaters.

In goal, Semyon Varlamov would be hard to dislodge.  At the time he was installed on All-Team V, he already ranked 13th among goalies in team history in wins (30), second in save percentage (.917, to Braden Holtby’s .919; minimum: 20 games), second in goals against average (2.39, to Jim Carey’s 2.37), and tied for 11th in shutouts (four), despite appearing in only 59 games (tied for 21st).  That there are no goalies among the five who have dressed since 2014 who would qualify as a replacement makes this an easy task.  Varlamov remains as the goalie of All-Team V.

With one change in All-Team V – Vrana for Volpatti – this becomes a team that can surprise, given the per-82 game production of Valentine and Ververgaert.  Is it among the elite teams of the alphabet for the Caps? Probably not, but it might be one of the more entertaining ones.
Posted by The Peerless at 12:00 PM No comments: