The Peerless Prognosticator is ON THE AIR!!! -- Game 26: Panthers vs. Capitals, November 27th

It is Thanksgiving week in the Nation’s Capital, and that means hockey.  The Capitals start their week with the first of a two-game holiday set wrapped around the Thanksgiving holiday when the Florida Panthers come to town.  The Capitals are in the unfamiliar position of trying to shake off a two-game losing streak, their first consecutive losses since losing three in a row in Games 3-5 in early October.  The Panthers also are on a two-game losing streak, the losses to Carolina and Buffalo being the only consecutive losses in regulation to date this season for the Panthers. 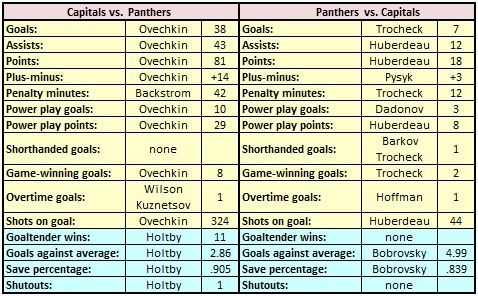 The Panthers have had two number one overall draft picks in their history, both of them defensemen, taken 20 years apart.  The first, Ed Jovanovski (first overall in 1994), played three and a half seasons in Florida as a physical, leave-it-all-on-the-ice sort of defenseman, but did not seem to quite reach his potential.  He was traded to the Vancouver Canucks as the key Panther piece in a blockbuster deal that involved six players and two draft picks, Pavel Bure being the key piece in the return to Florida.  Jovanovski went on to play more than 1,100 games in the NHL and post 500 points, ending his career with the team that drafted him in 2013-2014.

There are no similar plans afoot to move Aaron Ekblad (first overall in 2004) any time soon.  He is the only defenseman in team history to win the Calder Trophy as the league’s top rookie (forward Jonathan Huberdeau won in 2012-2013), and the 414 games he has played for the Panthers already ranks fifth in team history among defensemen.  His 71 goals top all blueliners to have played for Florida, and he appears all but certain to become the third defenseman in team history to record 200 points with the team, needing only 14 points to reach that mark.  He has been a consistent, if not spectacular point producer in his five-plus seasons in the NHL, finishing with at least ten goals in each of his previous five seasons and finishing with more than 30 points in four of them.

Florida has not done much in the way of working rookies into the lineup, Riley Stillman dressing for three games as the only rookie for Florida this season (if the name is familiar, his father Cory skated 1,025 games in the NHL for six teams, including 165 games over three seasons for the Panthers).  The only skater younger than the 23-year old Ekblad to get significant time this season is 22-year old center Denis Malgin, who has dressed for 22 games to date.  Malgin was a fourth-round pick (102nd overall) of the Panthers in the 2015 Entry Draft and to date is the leader among 2015 fourth rounders in total NHL games played (170).  In fact, no forward drafted later than Malgin has played in more NHL games to date.

After playing in 148 games over his first three seasons with the club, Malgin appears to have cemented a more permanent place in the Panther lineup.  He has dressed for 22 of the Panthers’ 24 games to date and needs one point to become the 11th skater to hit double digits for the club this season.  If he maintains a spot in the lineup, he is on a pace to finish 11-22-33, which would top his best scoring season to date, in 2017-2018 when he went 11-11-22 in 51 games.  He has hit a rough patch, though.  He recorded all nine of his points this season in his first 12 games.  In his last ten games Malgin is 0-0-0, minus-6.  He does not have a goal in over a month, going 15 games without one since he recorded one in a 4-2 win over Pittsburgh on October 22nd.  In eight career games against the Caps, Malgin is 3-3-6, plus-2.

Being an “underrated player” seems to be a thing in the NHL.  Some players get that tag attached to them persistently, a badge of…something…that signifies talent and accomplishment that doesn’t get recognized.  But after a while, that label becomes a bit faded and wrinkled.  It was true for Nicklas Backstrom, who was widely characterized as “underrated,” no doubt in part due to his playing in the long shadow of Alex Ovechkin.  Now, though, it is the badge that Aleksander Barkov wears.  In November 2018, he won a poll of players to name the league’s most underrated player (small wonder, Backstrom came in second).  This past September, Barkov got more love as the underrated player that players love. 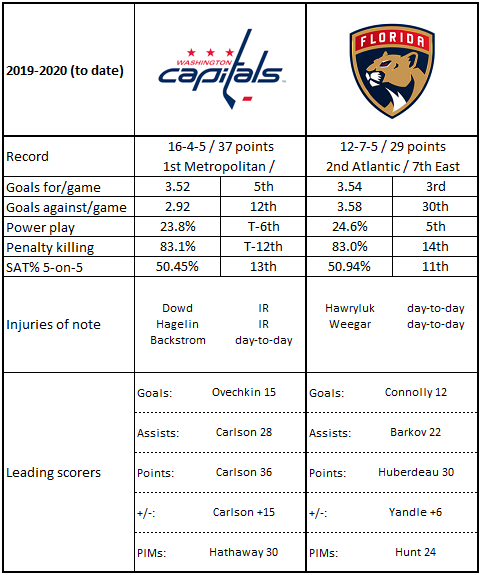 1.  If Florida scores a power play goal, it will be the team’s 100th in the all-time series against the Caps.

2.  Florida has played to more Gimmicks against the Capitals than any other opponent.  The teams have gone to the trick shot portion of the contest 11 times, the Panthers holding a 7-4 record.  Only New Jersey has as many wins in the freestyle competition against Washington as the Panthers.

3.  The Panthers play within the rules, at least in terms of being held accountable.  They have been put shorthanded 59 times in 24 games this season.  Only Winnipeg has faced fewer shorthanded situations (54 in 24 games).

4.  Florida has been a bit sloppy on the road in one respect.  Their 137 charged giveaways in 13 road games is second most in the league in road games this season (Vancouver: 148 in 15 road games).

5. The Panthers are one of ten teams in the league with a positive shot-attempts differential at 5-on-5 on the road this season (plus-6).

1.  If the Caps score three goals in this game, it will make 200 goals scored against the Panthers all-time on home ice.

2.  Sometime in this game, the Panthers are likely to record their 24th shot on goal.  This will mark a milestone in Caps history, the 50,000th shot on goal allowed on home ice in team history.

3.  The Caps have played 12 home games, four of them ending in extra time losses.  They are tied with four other teams – New Jersey, Toronto, Philadelphia, and Boston – for most extra time losses on home ice this season.

4.  Garnet Hathaway’s match penalty against Anaheim on November 18th remains the only match penalty charged to a team on home ice so far this season.

5.  The Caps are one of four teams this season to be charged with 25 or more penalty minutes in a game twice.  They did it against Colorado on October 14th and again against Anaheim on November 18th.  The other teams are San Jose, New York Rangers, and Calgary.

When the Florida Panthers signed Brett Connolly to a four-year/$14 million contract last July after he posted his first career 20-goal season with the Caps in 2018-2019 (22 goals), they might have been hoping for a similar effort as a secondary scorer to support the trio of 30-goal scorers returning from last season – Mike Hoffman (36), Aleksander Barkov (35), and Jonathan Huberdeau (30).  Of that trio, only Huberdeau is on a pace to approach last season’s total, and that is where Connolly comes in.  His 11 goals to date lead the team, and he and Huberdeau are the only players on the squad with 10 even strength goals.

Connolly, who established himself as an efficient shooter with the Caps ((18.1 percent over his three years in Washington, fourth-best over that period among 401 players with at least 250 shots on goal), has been winning all the prizes at the shooting arcade this season, his 28.2 percent mark leading the league among 428 players posting at least 25 shots on goal.  And, only once in the nine games in which he recorded a goal have the Panthers lost in regulation (6-1-2).  They are 6-6-3 in the games in which he did not post a goal.  Ice time might be something to watch with Connolly.  Florida is 4-5-2 in 11 games in which he skated more than 15 minutes, 8-2-3 in the 13 games in which he logged less than 15 minutes in ice time.  Connolly is 1-3-4, minus-2, in 14 career games against the Capitals.

There have been 79 players in Capitals history to record at least 100 points with the club.  Jakub Vrana’s next point will make him the 80th player on that list.  Absent being spirited away by aliens, he is certain to become only the 21st player in team history to reach 100 points before his 24th birthday.  Vrana’s progress has been steady and consistent.  His goal scoring has risen from three in his rookie season to 13 to 24 last year.  Assists, from three to 14 to 23.  Points, from 6 to 27 to 47.  With 11 goals and eight assists this season, he is on a pace to finish 36-26-62, all of which would be career highs.  His ice time is also getting a boost, his 14:22 in average ice time this season about half a shift more than last year (14:02) and more than three minutes more than his first season (11:07).  His shooting has grown more efficient as well, his 15.9 percent on 69 shots being his best in four seasons so far.

What Vrana has done so far this season, and something that some “snipers” do, is score goals in bunches.  He recorded goals in each of the first two games of the season, had five in a two-game span to start November, and he has goals in two of his last three games.  On the other hand, despite 11 goals, he was without one in 17 of the 25 games in which he played to date.  That the Caps do not have a loss in regulation in which he recorded a goal (6-0-2) makes Caps fans hope his goal scoring and goal-game frequency improves even more.  In seven career games against Florida, Vrana is 2-1-3, plus-2.

Thanksgiving week has been pretty good to the Caps over the years, at home especially.  On the other hand, Florida remains this annoying team that has a special gift for making things unpleasant for the Caps in recent years.  The last two games played between the teams in Washington ended in extra time, the Caps losing both (part of a four-game losing streak to the Panthers in DC), and the teams have played four extra time games out of the last nine played in Washington, three of them settled in the Gimmick.  It suggests a close matchup, but the tradition prevails.