The Peerless Prognosticator is ON THE AIR!!! -- Caps vs. Senators, January 7th

The Capitals skate in the second half of their mini-home set against the Ottawa Senators tonight at Verizon Center, and we have a treat tonight as the cousins – Cheerless and Fearless – honor us with a visit. Guys, how was your holiday?

Cheerless: "What friends? You’re about as loved as Bettman at a Stanley Cup Game 7."

Cheerless, you sound as if you had a less-than-merry Christmas.

"Well, yeah… all I wanted was "an official Red Ryder carbine-action 200-shot range model hockey stick with a compass in the blade, and this thing which tells time."

“You should have seen him on Christmas morning, tearing around under the tree looking for his Red Ryder hockey stick. He got a dirigible, a pair of socks…”

But no Red Ryder…

“No official Red Ryder carbine-action 200-shot range model hockey stick with a compass in the blade, and this thing which tells time."

“yadda-yadda-yadda…Only you didn't say ‘Fudge.’ You said THE word, the big one, the queen-mother of dirty words, the "F-dash-dash-dash" word!”

“Yeah, which meant washing my mouth out with soap. Fearless over here thinks he’s such a hoity-toity gourmet, but over the years I’ve gotten to be quite a connoisseur of soap.”

“My personal preference was for Lux, but I found Palmolive had a nice, piquant after-dinner flavor - heady, but with just a touch of mellow smoothness. Life Buoy, on the other hand...”

“Yeah, tastes like the chicken tenders at Verizon Center.”

Well, we hope next Christmas will be kinder to Cheerless, but the task at hand is for the Capitals to go to 2-0 at home in the new year. And to do that they will have to defeat a somewhat depleted Ottawa Senator team. Daniel Alfredsson and Jason Spezza – players who have averaged 88 and 86 points per year, respectively, since the lockout, are out until at least February. Spezza is out with an MCL tear, and Alfredsson is out with a shoulder separation.

The Senators have been playing without both since Alfredsson went out in a ghastly 8-2 loss to Pittsburgh in the last game before Christmas. After that game they were 5-8-0 for the month of December. But an odd thing has happened since then. The Senators are 4-2-0 since Christmas. Their goals for/against isn’t spectacular (19 for, 18 against, not including Gimmicks), and they don’t seem to have relied on a cornerstone goalie – Pascal Leclaire went 3-1-0 in the first four games after Christmas, Brian Elliott going 1-1-0 in both starts in the new year (Leclaire relieved Elliott in the second of these games, a 4-1 loss to Boston). They’ve just found a way to muddle through.

Or perhaps more accurately, “grit” their way through. We happened upon the Ottawa Sun entry for today’s game and took note of Don Brennan’s article describing the days off a player might take when he’s got some dings and dents. Some folks might call it a “maintenance day,” but as Brennan reports, the Senators have another name for it…

Hockey players are a tough lot.

What the absences of Alfredsson and Spezza will mean is that the scoring burden has to be spread around. The overall numbers look like this... 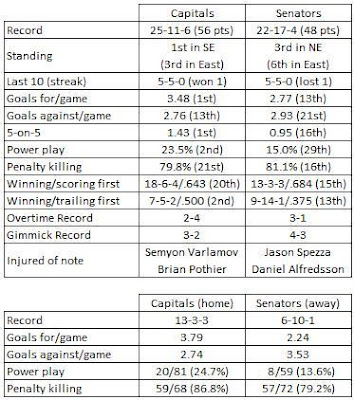 Mike Fisher has inherited the description of “Senators’ leading scorer” for the moment (15-17-32), although his output has dried up a bit as of late. Since Christmas, as the Senators have gone on this 4-2-0 run, Fisher is 0-3-3 in the six games and has not had a goal since December 16th, a goal-less streak of ten games. He has, though, had a respectable output against the Caps, going 9-8-17 in 25 career games against Washington. He is 5-4-9 in his last eight games against the Caps.

Another Senator who had a ten-game goal-less streak broke out in a big way last weekend. On Sunday Alex Kovalev potted four goals in a 7-4 win over the Flyers. While Kovalev was held without a goal in a 4-1 loss to the Bruins on Tuesday (he assisted on the only Ottawa goal), the outburst is a reminder that Kovalev can still, at age 36, summon up the big score from time to time. In 59 career games against the Caps Kovalev is 17-28-45.

When last we spoke of Milan Michalek, in a preview of the November 23rd contest with the Caps, he had gotten off to a 10-goals-in-20-games start. Well, since then Mihalek has six goals in 23 games, one in his last 18, and none in his last eight. That qualifies as a slump. Despite the slump, though, Mihalek remains the top goal scorer for the Senators (16), including the absent Alfredsson and Spezza. In four career games against the Caps he is 1-3-4.

How, then, have the Senators done it? Well, 22 of 24 players who have dressed for Ottawa this year have goals. Ten have at least five. It’s not “Capitals” level of production, perhaps (Washington has eight players with at least ten goals), but it has allowed Ottawa to remain in the top-eight playoff mix. In the 4-2-0 run so far since Christmas, nine Senators have shared in the 19 goals scored. There are, of course, the four that Kovalev has, but four have come from another, unexpected source. Ryan Shannon has come alive since Christmas. Whereas he had no goals in the 31 games he played before the holiday, he has four in six games since (although none in his last three).

Ruutu isn’t going to get you a lot of points (8-8-16 in 43 games this year, 1-2-3 in 15 career games against the Capitals). But he is a pest…ok, he’s dirty. In those 15 career games against the Caps he has 36 penalty minutes. If he’s heading off to the box (and he didn’t in the first meeting of these teams), he’s giving the Caps – with the league’s second-best power play – opportunities that a team like Ottawa (16th in penalty killing) probably can’t afford.

You can’t really say Backstrom is in a slump, but he seems to have hit a pothole. In his last eight games he is 4-3-7, plus-2 (and a migraine), which is a bit off his season scoring pace. He has, however, had success against Ottawa (3-8-11 in nine games). Should he go without a point tonight, it would tie his season high streak of games without a point (three).

1. End it early. The Caps have outscored Ottawa 49-32 in the first period this year. As if to emphasize the point, the Caps have allowed only 25 first period goals this year (fourth fewest in the league), while Ottawa has allowed 40 (sixth most).

2. Scrape off the rust. It appears as if Jose Theodore will get a chance to work his way out from the back of the dog house tonight. Theodore has played in seven of the Caps’ 17 games since Thanksgiving, during which he is 4-3-0, 2.72, .903. However, after turning away 27 of 28 shots in a 6-1 win over Colorado on December 15th, he has but two appearances since, neither inspiring a lot of confidence – a 3-2 loss at Vancouver in which he stopped 17 of 20 shots, and a 6-3 loss against Carolina in which he was lit up for five goals on 25 shots.

3. There’s even strength, and then there’s “even strength.” This gets back to a player like Ruutu and his ability to take another Cap off when he gets frisky. No team in the league has more 5-on-5 goals than the Caps (99). But at 4-on-4, the Caps rank tied for 21st in goals scored (two).

In the end, the Caps have a distinct firepower advantage with Alfredsson and Spezza out. That means they have to dictate the pace of the game. They can’t react, they have to attack, and this emphasizes once more that first key. Watch to see if the Caps go to the first intermission with a lead, preferably a multi-goal lead. Given the performance of the teams to date, you could reasonably expect that (they had a 2-1 lead in Ottawa in November and lost in overtime). That’s how we think it will play out.