It's All Down Hill From Here 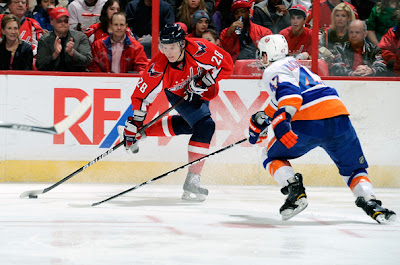 Alexander Semin will wear red after all.

Yesterday, the 28-year old winger signed a one-year deal with the Carolina Hurricanes paying him an even $7 million for the 2012-2013 season.  It is a 4.5 percent pay raise for a player whose goal production dropped by 25 percent in the 2011-2012 season with Washington.  In fact, it continued a distressing trend in which compensation and goal production have been going in opposite directions over the past few years:

If the trend continues, Semin would finish the 2012-2013 season with 16 goals. We're guessing that is not what the Hurricanes have in mind.

What Semin has in mind, though, is to be happy and to fit in. In his own words...

"I'm very happy to be a Carolina Hurricane...It's a great fit for me. I look forward to playing with great players, and putting together a winning season."

What about that "fit?" First of all, he fills a clear need. No winger recorded more than 20 goals for Carolina last season. No Hurricane had as many as 25 goals (Eric Staal led the team with 24). And to be more specific, Jussi Jokinen led the Hurricanes' left wingers with 12. One would think Semin will improve on that.

However, his ability to do that might depend as much on the matter of "fit." The Hurricanes were, are, and will continue to be Eric Staal's team as long as he is employed by Carolina. In that sense, Semin does not have to be "the man," expected to carry a team in a manner befitting his compensation level. The presence of Eric Staal -- and Jordan Staal, for that matter -- will allow the Hurricanes to just "let Alex be Alex." And in that situation he could thrive.

The presence of the Staals also gives Semin the opportunity to play alongside stronger centers more consistently than was the case in Washington. The Capitals' lack of depth at the position past Nicklas Backstrom has been well-chronicled. Semin often had to play with a revolving door at the position. In the last three years alone, that group might have included: Brooks Laich, Brendan Morrison, Marcus Johansson, Jason Arnott, Mathieu Perreault, Cody Eakin, and more. It is difficult to establish a chemistry with a playmaker with that kind of turnover. He should see the same center on his right more often and more regularly in Carolina.

What is much more difficult to gauge are the intangibles of fit. From a fan's perspective Semin could give off an air of aloofness, of being a sort who was on a team, but not quite (at least obviously) a part of "a team." He will be stepping into a new locker room in the NHL for the first time in quite some time, and how he fits with his teammates in terms of interaction will be interesting to see from afar.

But that is probably a bit too far of a walk down Pop Psychology Boulevard. We think that Carolina is a good fit for Semin, perhaps among the best fits of any team that might have been pondering his services. Hurricane fans will have the chance to see one of the most spellbinding talents in the league when he is on his game. But as Caps fans could tell them, they might also wonder where he is on some nights. How he maximizes the former and minimizes the latter will be the difference between returning to the 35-40 goal scorer he has been and the 16-goal scorer he is trending toward becoming.
Posted by The Peerless at 6:27 AM No comments: