The Peerless Prognosticator is ON THE AIR!!! -- Game 22: Penguins at Capitals, November 20th

The Washington Capitals finally get down the real business of Metropolitan Division rivalries on Wednesday when they host the Pittsburgh Penguins in the first Metro Matchup of Alex Ovechkin and Sidney Crosby.  It has been a long time since these two teams faced one another as division rivals.

The last time these two teams met as division rivals was on March 28, 1993, in Landover, MD.  It was not a pleasant night if you were a Caps fan.  In front of a sellout crowd of 18,130 at Capital Centre (the last year the arena would be so named) the Capitals found themselves behind the eight-ball early, allowing three power plays to the league’s top power play team.  The Caps killed them all but allowed the game’s first goal nonetheless, an even strength goal by Mike Stapleton mid-way through the frame.

Mid-way through the second period the visitors added to their lead on a power play goal by Kevin Stevens.  Rick Tocchet added a goal in the third period, and Mario Lemieux closed the Pittsburgh scoring with an empty net late.  Pat Elynuik’s goal was not enough for the Caps, who ended up having to endure eight Pittsburgh power plays in the 4-1 loss.  The win was Pittsburgh’s tenth in a row and ended the season series with a 5-1-1 advantage for the Penguins.

How long ago was that?

Which brings us to the game.  The way the Penguins started the season, you might have thought they were that 1992-1993 team reincarnated.  Pittsburgh raced out to a 7-1-0 record in their first eight games and outscored their competition by a 30-19 margin.  Four of their seven wins were by three-goal margins.

Then they lost a 1-0 decision at home to the Colorado Avalanche.  Then they lost again…and again.  Since their 7-1-0 start the Penguins have lurched from streak to streak.  There was the three-game losing streak following their big start, then a four-game winning streak, then a three game losing streak.  The Pens have avoided the streakiness for the time being, sandwiching a pair of convincing wins against Nashville and Anaheim around a disappointing loss at New Jersey, but they are nonetheless a team that is 6-7-0 since their 7-1-0 start. 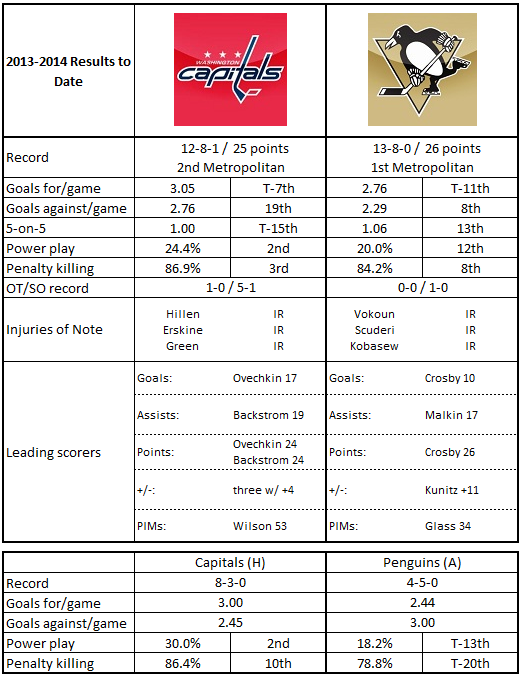 4.  In each of their last six games the Penguins have either scored or allowed one goal in the final decision, four losses when scoring one goal and two wins when allowing one goal.

5.  Pittsburgh has the sixth best goal differential per game… at home.  On the road they rank only 19th at -0.56 per game, just ahead of Edmonton.

1.  In their last six home games the Caps are 8-for-23 on the power play (34.8 percent).  In those same six games the Caps are 22-for-25 killing penalties (88.0 percent).  Overall they have outscored opponents by a 22-11 margin in those games and have allowed more than two goals only once.

2.  Alex Ovechkin is 22-18-40 in 31 career regular season games against the Penguins, but the oddest number in his resume against Pittsburgh might be that he is a plus-18.  That is the better than any comparable number he has against any other NHL team.

3.  If you are thinking of a spark from a secondary scorer, think of Mikhail Grabovski.  He has six goals and 16 points in 18 career games against Pittsburgh.  His goal total is surpassed only by his totals against Boston and Buffalo, against whom he has played a total of 59 career games.

5.  Nicklas Backstrom and Alex Ovechkin are tied for the league lead in power play points (13 apiece).  Ovechkin leads in goals (7), while Backstrom leads in assists (12).

Well, here we are again.  In four years since the Penguins won the Stanley Cup, Marc-Andre Fleury has had decent, if unspectacular regular season success.  In 232 appearances over that time he is 138-66-15 with a goals-against average of 2.44, a save percentage of .913, and eight shutouts.  Then there are the playoffs.  In 31 appearances he is 14-16, 3.18, .880, with three shutouts.  If anything, the start to his 2013-2014 season looks even better than his previous four seasons.  He is 12-6-0, 2.00, .921, with one shutout – seventh in goals-against average and tied for 14th in save percentage.  But it hardly seems to matter.  No matter what numbers he puts up, Penguin fans will be on tenterhooks waiting to see if there is another post-season meltdown in his future.  In 23 career regular season appearances against Washington he is 13-7-2, 2.60, .912, with one shutout.

Meanwhile, at the other end of the ice, there is the wunderkind with the 10-3-0, 2.40, .937 record over his last 13 appearances who, after a sluggish start has climbed onto the first page of the NHL.com statistics – 25th in goals against average over all and 13th in save percentage.  In nine home appearances he is 6-2-0, 2.28, .936 and has not allowed more than three goals in any appearance (he did allow three goals in 16 minutes against Calgary).  Against Pittsburgh, though, his career has been anything but bluebirds and accordions.  In three career appearances against the Penguins he is 0-3-0, 4.53, .861.  If you are going to play a hunch, look for Michal Neuvirth in this one (2-0-2, 1.72, .937, with two shutouts in five career appearances).

1.  Make ‘em work for the zone.  If the Caps allow Sidney Crosby and Evgeni Malkin skate with time and space into their zone, it could be an iffy night.  Both see the ice in full and if the puck is on their sticks while the Caps are trying to establish defensive zone presence, the Caps are flirting with danger.

2.  Give your defensemen a chance.  One of the problems the Caps seem to have against this team is in figuring a way to deal with the Pittsburgh forecheck in a way that does not involve a lot of punishment to defensemen.   Pittsburgh has outshot the Caps in eight straight games.  This does not appear coincidental.

3.  Take advantage of the soft underbelly.  Pittsburgh has a lot of high end skill, but they also have depth issues.  Yes, they have Kris Letang and Brooks Orpik on the blue line, but they also have Deryk Engelland and a rookie – Olli Maatta – getting regular minutes.  They are not getting much offensive support from their third or fourth lines.  Get past the “name” players and this looks like a good, not great team.

It is hard to know what to make of this game.  Yes, it is the first “Metropolitan” meeting of the teams, but with 60-plus games left in the season it is hard to attach too much meaning to that.  The whole “Ovechkin-Crosby” thing has been done to death, and we get it.  They’re both really good players who seem to bring out the best in the other.  They are teams that might respect one another, but they certainly do not like one another.  It’s just a bit hard to find an angle to this game that goes beyond a faint sense of bragging rights, and that probably accrues to fans more than the players of either team, who are thinking of bigger things ahead.

Posted by The Peerless at 9:00 PM No comments: