“The investor of today does not profit from yesterday's growth.”
-- Warren Buffett

In the ten seasons since the 2004-2005 lockout, six players in the NHL amassed 300 or more penalty minutes over their first two seasons.  Here is the list, in order of their accomplishment:

Which of these players does not belong on this list?  The first five of those players average having been taken as mid-fifth round picks (139th overall, to be precise), and none of them were taken higher than the third round, 73rd overall (Carcillo).

On the other hand, Tom Wilson was a first round, 16th overall pick taken by the Washington Capitals in the 2012 draft.  He was taken before Teuvo Teravainen, before Olli Maatta, before Tanner Pearson.  Not that he has been a bust after two seasons (he does rank 11th in career points in his 2012 draft class), but with 149 regular season and 16 playoff games now under his belt, the ability to pile up penalty minutes cannot be the limit of his performance.

As for his 2014-2015 contribution to his resume, if got off to a slow start owing to a broken fibula his suffered over the summer.  He missed the Caps’ first eight games and ten of their first 16 contests.  Still, he was one of only 15 players age 20 or younger (on February 1st) who appeared in 65 or more games this season (source: hockey-reference.com).

If there was an odd part of his game, it was not that his offensive contributions were meager (4-13-17), it was that they had an odd relationship to the Caps’ success on the ice.  Washington was 1-3-0 in games in which Wilson scored a goal, but 9-0-2 in which he had at least one assist without scoring a goal (the Caps were 10-3-2 in the 15 games in which he recorded a point).

Then there was the more-is-less aspect to his ice time.  In the nine games in which Wilson skated 15 or more minutes, the Caps were 3-4-2.  In the 26 games in which he recorded less than ten minutes of ice time, Washington was 15-8-3.

There was also the matter of the 12 fights he had this season.  Did they make a difference?  Or, at the very least, were they accompanied by success on the scoreboard.  Not so much, really.  The Caps were 6-4-2 in games in which Wilson recorded a fighting major.  Breaking that down further (and take this with a large subjective grain of salt), based on the decisions as rendered by the voters at hockeyfights.com, it was 3-3-0 in fights that Wilson “won,” 3-1-2 in those he did not. 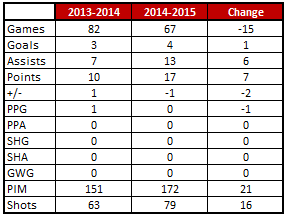 Fearless’ Take: In 40 years of Capitals hockey, only 12 players have recorded more points over their first two seasons before reaching the age of 21 than Wilson (27). Only three – Gaetan Duchesne, Bob Carpenter, and Scott Stevens – appeared in more than the 149 games in which Wilson has appeared.

Cheerless’ Take: Tom Wilson has more penalty minutes over his two-year career (323) than the next four players in the 2012 draft class in PIMs: Jacob Trouba (89), Alex Galchenyuk (85), Nail Yakupov (78), and Hampus Lindholm (68).  Wilson has done it is 149 games, the other four in a total of 671 man-games.  He is tied for third in total games with at least five penalty minutes charged against him (30).  Every fifth game, he’s spending five or more minutes in the penalty box?  It’s going to be hard developing those other skills when he’s on the wrong side of the glass.

Odd Wilson Fact: The longest that Tom Wilson went without a point this season was 11 games, from December 16th through January 10th.  The Caps went 8-0-3 in those games.  He missed one game entirely in that span, the Caps’ only regulation loss over that period, a 4-2 loss to the Rangers.

Game to Remember: December 13th versus Tampa Bay.  It might have been just another night like many others in the early stages of Tom Wilson’s career.  Barely 100 seconds into the game he got into a scrap with the Lightning’s Brenden Morrow after the latter took exception to a hit Wilson put on teammate Anton Stralman at the Capitals’ bench.  Wilson made short work of Morrow, sending him to the ice during the bout, and Wilson had his sixth fighting major of the season.  It would not be his only contribution, though, even if more would take some time in coming.  He was credited with an assist when a shot by Nate Schmidt hit him on the way through to goalie Ben Bishop.  It was enough to force Bishop to make an awkward save, the rebound finding its way to Nicklas Backstrom, who snapped a backhand shot over Bishop’s left shoulder to give the Caps a 1-0 lead.

Eight minutes later it was Backstrom feeding Wilson as he was heading into the Tampa Bay zone.  Wilson dropped a pass for Backstrom, who fired a shot that Bishop knocked down.  Alex Ovechkin could not poke in the rebound, but Backstrom filled in an did just that, drawing the puck back from behind the goal line next to the cage and culing it around the pipe to put the Caps up 2-0 in what would be a 4-2 win.  Wilson finished with his fighting major, a hit, and a takeaway, and his second two-point game of the season.

Game to Forget: April 2nd versus Montreal.  In the last week of the regular season, you are getting ready for the playoffs and eager to put to the test the skills you have developed and honed over the course of the season.  In this game, though, Tom Wilson did not get the time to hone much of anything.  He skated only six shifts – only one after the 9:18 mark of the second period – and did not record a shot attempt in his 4:14 of total ice time, his lowest mark of the season in what would be a 5-4 Gimmick win for the Caps.

Perhaps it says something that Tom Wilson, a month after the Capitals were eliminated from the playoffs, is still ranked tenth in total penalty minutes in the postseason.  Then again, he earned those 25 minutes playing in more games than six of the nine players ahead of him.  In terms of time on ice, Wilson ranks 327th of 339 skaters in the post season in ice time per game (through Sunday).  It did not leave him much of an opportunity to make a contribution, and those results were mixed.  It was his hit on New York Islander defenseman Lubomir Visnovsky late in the second period of Game 4 of the opening round that might have tipped the balance of power to the Capitals.  In the second round against the New York Rangers, his assist on a Curtis Glencross goal in the third period of Game 5 might have been a highlight, but it was forgotten when the Capitals let the 1-0 lead slip away in the last two minutes and the game itself in overtime.

In Tom Wilson’s first game of the season he skated 11 shifts over 8:14 of total ice time, recording no points, one shot on goal, and four hits in a 4-2 loss to the Detroit Red Wings on October 29th.  In his last regular season game of the year he skated against those same Red Wings, getting 10 shifts over 7:26 of ice time, recording no points, with three shots on goal and two hits.

Except for the puck to the head in the third period that ended his day (and his regular season), there was a certain – and unwelcome – sameness to it, and not just with respect to the opponent.  Wilson has mastered the more violent aspects of the game, but it is a hard way to make a living, and it should not be the limit of expectations for a 16th overall draft pick.

It would be hard to say, other than a learning experience, that this was a good year for Tom Wilson.  Not all of it was due to circumstances under his control.  He does not dictate deployments, except to force a coach’s hand by producing well.  Then again, he did spend almost half of his even-strength minutes for the season with Alex Ovechkin and Nicklas Backstrom (source: stats.hockeyanalysis.com).  And, he did give hints of better production in his underlying numbers.

However, Wilson has done about as much growing as possible into the “power” part of being a “power forward.”  Going forward, investments in time and diligence will have to be made in the higher-skill portion of his game to make that use of the 16th overall pick in 2012 one with value.