A Problem is Still a Problem

The 2011 trading deadline is approaching for the National Hockey League, and no fan base waits with more anticipation for what might transpire than that of the Washington Capitals. The Caps filled one hole via trade this season already with the acquisition of defenseman Scott Hannan for forward Tomas Fleischmann in late November.

But what remains is something a lot of folks think of as a bigger hole, that of the center position behind Nicklas Backstrom. The Caps have held auditions for the part this season, including one for the traded Fleischmann. Since Fleischmann was traded, the focus shifted to giving a pair of rookies – Marcus Johansson and Mathieu Perreault – an opportunity to grab the job by the throat.

In principle, the strategy made sense. Two rookies competing for the same job and with enough games remaining in the regular season to give coaches a comprehensive look at their plusses and minuses. And, since the Caps were an “elite” team then (as opposed to, well, now), they had the luxury of accommodating what was an extended audition for each while the more experienced, more skilled players contributed to a pile of wins.

Thinking the strategy as a sound one depends on an important outcome – consistent, or at least demonstrable improvement from the start of the audition to the end of it. We would hope, if not expect, that either or both of Johansson and Perreault would improve from the fall to February and beyond, thus giving the Caps’ front office some confidence that either could perform in the second line center role adequately for the playoffs. Or, at least there would not be the urgency (and thus, the potential for overpaying) for obtaining a second line center via trade.

So, how has it gone? One way to look at it is by examining each of the players’ performance over ten-game slices of the season. We took a look at “rolling” ten-game segments to try to smooth the effects of simply dicing their games played into a few ten-game segments. First, Marcus Johansson, who has played 44 games this season:

Next, Mathieu Perreault, who has played in 30 games this season: 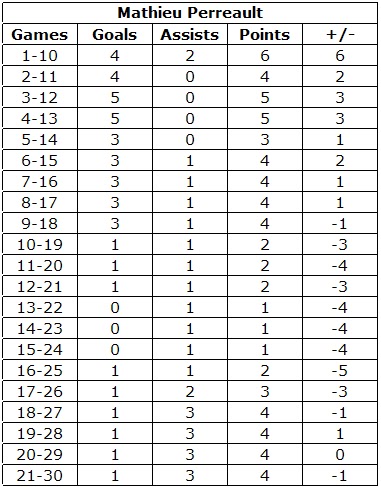 Neither player has spent all of his time at the second-line center position, and in fact Johansson has spent time at wing in stretches. But what seems evident, at least in terms of being able to generate offense in general, is that both players could use more seasoning. Neither appears ready to take on the playoff responsibilities that accrue to a scoring line center. There simply hasn’t been enough demonstrable improvement in their respective offensive production.

Both players, in fact, have been reasonably consistent in their offensive production, Perreault hitting the ground running a bit more than was the case for Johansson (understandable, since Perreault did have some NHL experience before this season, and this is Johansson’s first year playing on the smaller North American rinks). Both are, for the moment, more or less high-20’s/low 30’s point getters on an 82-game basis. Based on current scoring among NHL centers, that might not get you into the top-100 centers in total points (Johansson currently ranks 107th, Perreault 116th among centers in scoring).  And their progression over the course of the year, based on the information reflected above, does not indicate that their current level of production is appreciably higher than the level of production they exhibited earlier in the campaign.

What it says is that the Caps had a problem coming into the year with their second line center position, and they still have that problem. While either or both of these players could in the future become contributing, even valuable forwards, the answer to the Caps’ second line center problem – for this year – is not to be found in house, at least between the rookies. This doesn’t address the matter of whether Brooks Laich is an answer or any of the other centers on the roster. Generally speaking, though, we cannot help but think (as we have for some time) that this year’s answer to finding production out of the second line center position comes from elsewhere. The Caps need to make a trade to address that problem.
Posted by The Peerless at 11:55 AM 2 comments:

The Peerless Prognosticator is ON THE AIR!!! -- Caps vs. Ducks, February 16th

The Caps try to get even on their five-game road trip this evening when they head to Anaheim to visit the Ducks.

“Cuz, it’s our only trip out here this year. We can’t go to Disneyland?”

We here on business, Fearless.

“But I wanna go to Space Mountain and ‘Rocket into the outer reaches of darkest space on this high-speed thrill ride that hurtles you into the final fun frontier!’” 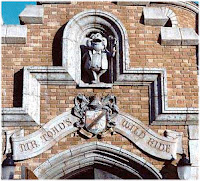 “And then go on Mr. Toad’s Wild ride that ‘recreates the frenzied journey of J. Thaddeus Toad, Esq. from the Wind in the Willows segment of the animated film The Adventures of Ichabod and Mr. Toad.’ I can ‘zig and zag in a motorcar for a manic drive through austere Toad Hall and the English countryside.’”

Cheerless, your whole life is a manic drive on a frenzied journey.

The Ducks had coal in their stockings for Christmas, losing their games immediately before and after the holiday. It was the last time this season they lost consecutive games. Since then they are 14-4-0 and have climbed to fourth in the Western Conference. The Ducks have done it with equal parts offense (3.22 goals/game) and defense (2.5 goals allowed/game), power play (29.8 percent) and penalty killing (86.4 percent) over those 18 games. Their overall numbers look like this: 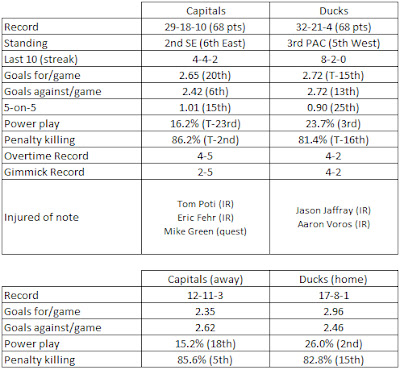 Anaheim features five 40-point players on the roster at the moment – Corey Perry, Teemu Selanne, Bobby Ryan, Lubomir Visnovsky, and Ryan Getzlaf. It is quite a mix of youth and experience, Selanne being the oldest member of the club (40) and Ryan among the youngest (23). Selanne, in addition to having served in the Finnish army and taught kindergarten for three years (according to the Anaheim media guide), has had a fine time over this 14-4-0 stretch for the Ducks. He is 7-14-21, plus-8 over his last 18 games with three game-winning goals. He had a four-point game last Friday, including the goal that sent the game into overtime in a 5-4 overtime win over Calgary. He has been something of a Cap-killer in his career, going 18-16-34 in 22 career games against Washington.

Bobby Ryan has had his own fun time on the 18-game run for the Ducks, going 13-5-18, even. The 13 goals in 18 games has allowed Ryan to climb into a tie for seventh in the league in goals scored. Ryan isn’t old enough to have built the resume of Selanne, on or off the ice (although he is a fan of the TV show, “Diners, Drive-Ins, and Dives”), but he is on a pace to set a career best in goals scored (39) and points (65). He has a pair of goals and an assist in two career games against the Caps.

Visnovsky is the defenseman among those five 40-point scorers for the Ducks, and he is tied for second among all defenseman in the league in points (44). He has been a reliable point getter from the blue line, passing 40 points in five of the past six seasons, including this one. In the 14-4-0 run for the Ducks leading up to this game he is 3-13-16, plus-8; although he has only a single assist in his last five games.

Goaltender Jonas Hiller returned to the lineup last Sunday after missing two games with a case of fatigue and lightheadedness. He was not asked to do much. Edmonton managed only 12 shots on goal (they had 16 shot attempts blocked), and Hiller stopped them all in a 4-0 shutout. It was a welcome result, because quite frankly, Hiller wasn’t having much of a time of it before going on the shelf. In his four appearances before going on injured reserve, he was 2-1-0, but had a GAA or 3.98 and a save percentage of .895. He lasted only 11:15 in the last of those four games, getting pulled when he allowed three goals on ten shots and could not go on. Hiller has faced the Caps twice, winning his only decision with a career GAA of 3.38 and save percentage of .895 against the Caps. He defeated the Caps earlier this season in a 2-1 overtime decision that was the seventh loss in an eight game losing streak for the Caps.

Corey Perry is the leading scorer for the Ducks – 28-33-61. He is also 9-11-20 in the 14-4-0 run the Ducks are on since late December. He is a formidable player on the power play with ten goals and 11 assists. But Perry also gets 1:35 in shorthanded time a game, too. He leads the team in shorthanded scoring (2-1-3). Given the power play woes of the Caps lately, one might beware of Perry on the penalty kill.

Anaheim presents a difficult task for defensemen in that their forwards – Ryan, Perry, Getzlaf among them – have size and skill. John Carlson and his defenseman teammates will have a formidable test in that regard. But with Mike Green suffering inner ear trauma, Carlson could add “power play quarterback” to his list of duties. He is 1-3-4 on the power play this season, a line that the Caps might need to see improved if they are to end this three game losing streak.


1. On your mark…get set… The problems the Caps are having getting goals in the first period is not news to Caps fans. But Anaheim is not much better. They rank 26th in the league in first period goals. It is an opportunity for the Caps to get an early advantage.

2. GO! Alex Ovechkin has three first period goals this season. That is a pace for four for the full year. That is more than a little disturbing, given that in his five seasons before this (starting with his rookie year) he had 15, 12, 18, 8, and 9 goals. He needs to get off quicker as a means to give the Caps momentum and confidence.

3. Bring an extra set of gloves. Anaheim and Washington have almost identical numbers of minor penalties this season, 227 for the Caps and 226 for the Ducks. But Anaheim has 19 more major penalties than does Washington (53 to 34). Such is Anaheim’s style of play, and the Caps need to be ready for it and not let it get them off their own game.

In the end, there are 25 games left. We pointed out that teams that are successful in the spring (that is, “win Stanley Cups”) don’t waste those games. They generally perform quite well in them, and the Caps need to do the same. Trying to reverse a losing course out west is always a chore for this team, one that historically seems to have difficulty in that time zone. But it is what it is, and the Caps need to find a way – any way – to piece wins together. They have not had a winning streak of as many as three games since the last two games of December and the Winter Classic on January 1st. They haven’t had a longer winning streak since the end of November and first game of December (four games). If the Caps are to make something out of the last 25 games, they need to get off on the right foot tonight.