The Peerless Prognosticator is ON THE AIR!!! -- Game 56: Capitals at Islanders, February 18th

The Washington Capitals returned to winning ways on Tuesday night when they defeated the Los Angeles Kings, 3-1, at Verizon Center.  The Caps get a chance to start another winning streak on Thursday evening when they visit Brooklyn to take on the New York Islanders in the third of four meetings between the clubs this season.

The Caps have had success against the Islanders so far this season, winning the first two meetings, the first by a 4-1 margin in New York on January 7th and the second by a 3-2 margin on February 4th in Washington.  Power plays have contributed no goals to the series so far, but both teams come into this contest with their power plays making recent contributions.  The Caps are 3-for-16 over their last four games, their going 0-for-5 against the Kings ending a three-game streak featuring power play goals.  The Islanders are on fire on their man advantage, riding a six-game streak with goals on the power play (7-for-22/31.8 percent).

Nicklas Backstrom lead the Caps in points in the two games against the Islanders to date (1-3-4), part of a first line with T.J. Oshie and Alex Ovechkin that has four of the team’s seven goals in the series (Ovechkin has two, Oshie one).  The likely third line of Jason Chimera, Marcus Johansson, and Tom Wilson has chipped in a goal (Chimera) and a pair of assists as the other multi-point line in the series.  The Caps have three points from defensemen in the two games, Nate Schmidt recording the only goal among the blueliners.

With just three goals in the two games played between the teams so far, there is not a lot of scoring to go around for the Islanders.  Mikhail Grabovski is the only Islander with more than one point, recording a goal and an assist.  Josh Bailey and Brock Nelson have the other goals.

Scoring first has not mattered thus far in the series.  The Caps drew first blood in their 4-1 win in January, but it was the Islanders getting the first score in the February matchup.  Leading at the second intermission mattered in both games, though, with the Caps carrying a lead into the third period in both games before going on to win. 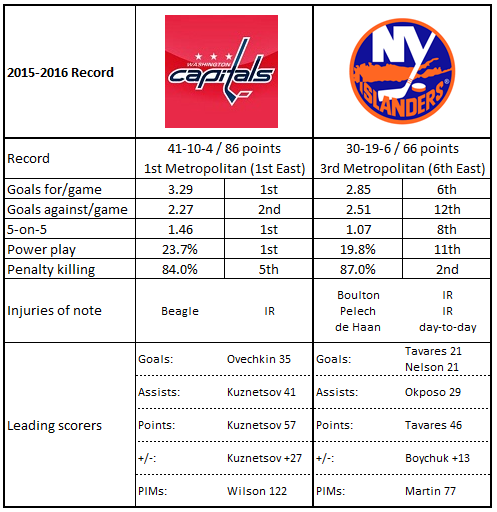 1.  The Islanders bring a 4-2-0 record into this game since losing to the Caps on February 4th.  They have been doing it largely with offense, recording 23 goals in those six games, 22 in their last five contests.  They have allowed 17 goals on their 4-2-0 run.

2.  John Tavares leads the team in goals (four) and points (11) over the six-game span.  He has inched up to 24th in the league in scoring, which might not sound like a lot, but he is just three points out of 15th place.

3.  The goaltending duties have been split down the middle by Jaroslav Halak and Thomas Greiss over the last six games, each with three decisions, Greiss a perfect 3-0-0, Halak 1-2-0.  Greiss has had the far better time of it in the numbers, posting a 1.29 goals against average in his three games to 5.32 for Halak, and recording a .952 save percentage to Halak’s .833.

4.  No team has allowed fewer power play goals at home than the Islander.  Their total of nine is tied with Montreal and Carolina.  They have the league’s best home penalty kill at 89.3 percent.

1.  The Caps are 5-1-0 since defeating the Islanders back on February 4th, but the record does not reflect how close the games were.  Five of the seven games were decided by one goal (one in a Gimmick), and the other two feature empty net goals by the Caps in the last minute of play for two-goal wins.

2. The Capitals are tied for the league lead in wins by three or more goals this season, but they haven’t had one in almost a month, since defeating the Columbus Blue Jackets, 6-3, on January 19th.

3.  If Alex Ovechkin records a point in this game it would give the Caps three players with 50 or more points, a league best.  As it is, they, the Dallas Stars (Jamie Benn, Tyler Seguin), and the Chicago Blackhawks (Patrick Kane, Artemi Panarin) are the only teams with two 50-point players.

5. The Caps are an underwater team in possession on the road this season, ranking 15th in Corsi-for at 5-on-5 (48.9 percent), but they do better in suppressing shot attempts.  As a road team they rank 10th with 54.1 shot attempts per 60 minutes (numbers from war-on-ice.com).

At the end of this season, Kyle Okposo will be an unrestricted free agent.  At an annual average value of $2.8 million on his current deal, he would be in line for a substantial raise.  A 27-year old averaging 22 goals per 82 games over his nine year career and not yet 28 years old (he will be 28 in April) will be in demand.  At the moment he is on a run that has him with points in eight of his last 12 games (5-8-13), including a hat trick in the Islanders’  8-1 win over the Edmonton Oilers on February 7th.  And, his scoring goals matters to the islanders.  They are 10-1-0 in the 11 games over which he registered his 15 goals of the season.  Okposo is 7-8-15, plus-3, in 23 career games against Washington.

John Carlson struggled with his offense from the blue line in the games immediately following Christmas.  He went without a point in six consecutive games and in the midst of that missed 12 games to a lower body injury.  However, he is slowly working himself back to a productive role.  He has points in three of his last four games.  He is still a top-ten defenseman in points per game, sitting in 10th place with 0.70 points per game (minimum: 30 games).  What he has been, though, is a very inconsistent possession player on a game-to-game basis.  Variability across games is to be expected, but Carlson’s swings have been considerable.  Over his last 20 games, for example, he has been under 40 percent Corsi-for at 5-on-5 seven times, above 60 percent four times, while his aggregate is 46.7 percent.  As the Caps head into their final third of the regular season, more balance in Carlson’s game seems something to shoot for.  He is 2-8-10, minus-4, in 20 career games against the Islanders.

When the Caps beat the Islanders on January 7th, 4-1, it was the first time since March 2013 that the Caps did not go to overtime on Islander ice (they were 2-2 in four extra time games).  It is something of a sign as to what directions these teams have pursued since the Caps beat the Islanders in a seven game playoff series last spring.  The Caps have the best record in the league, while New York is in third place in the Metropolitan Division, just four points ahead of the sixth-place Carolina Hurricanes (the Isles do have two games in hand).  That does not render them neutered by any means.  They have enough firepower in John Tavares, Brock Nelson, Kyle Okposo, and others to make things difficult for the Caps.  They could win this game, but it would not be the way to bet.

Posted by The Peerless at 6:02 PM No comments: