Week 23…trending upward, but not so much as to shake off the pursuit. 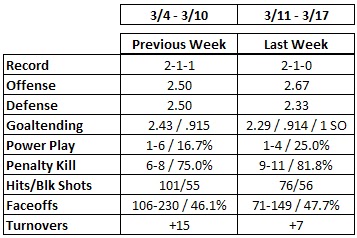 Two winning weeks in a row. What was almost as good was that the Caps split the two road games to end the week in the first leg of their five-game road trip. Not that it wasn’t without its excitement, that coming when the Caps fell behind the New York Islanders by three goals – twice – before roaring back with three unanswered goals in the last 21 minutes of the game to tie things up. Matt Hendricks won it in the skills competition for his second game-deciding goal in the Gimmick this season.

Falling behind was not a recipe for success against Winnipeg, though, as the Caps spent the whole game trying to overhaul the Jets after allowing a Winnipeg goal, allowing the first, then falling behind again after tying it up. The Caps allowed the Jets to get out in front one more time, and that was what sunk them in a 3-2 loss in Winnipeg. A win in that game might have effectively ended any realistic playoff hopes for the Jets in that they would have been six points down with 11 games to play and on the wrong side of the first tie-breaker against the Caps (number of regulation-plus-overtime wins). As it is, the Caps ended the week only two points ahead of both Winnipeg and Buffalo for eighth-place, and they were themselves five-points behind Florida for the top spot in the Southeast Division.

If there was an oddity in the team offense for the week it was that the Caps had eight goals and only 11 assists. Two goals were unassisted, another with only one assist. Another noteworthy item was the Caps propensity to score goals early in the third period. Of their eight goals this week four of them were scored in the third period, two in the first minute of play (Mathieu Perreault both times, once to give the Caps a 2-0 lead over Toronto and the other to tie the game with Winnipeg at two goals apiece). Dmitry Orlov added a goal in the second minute of the third period against the Islanders to bring the Caps within a goal in what would be a 5-4 Gimmick win.

An 11.0 shooting percentage for the week is not too bad, which means the problem (as it has been for stretches this season) was shots on goal. Only 73 shots (24.3 per game). In six of the nine regulation periods of the week the Caps could not manage as many as ten shots on goal. Getting three assists apiece from Marcus Johansson and Keith Aucoin was a good sign, and Mike Knuble getting a greasy goal – his first since December 5th (breaking a 34-game streak without one) -- might have been an even better sign. But only three points from the defense for the week, goals from only four forwards. The Caps are going to need more in the season’s last three weeks

Two of the three teams the Caps faced this week ranked in the top half of the league in offense, and one of them – Winnipeg – was a top-five offensive team at home. Still, the Caps limited them, and the Islanders, to a total of 166 shot attempts in the three games for the week (55.3 a game). That included a 32-minute stretch to start the Islander game in which the Caps were flat, allowing the Islanders four goals on 17 shots. What the Caps were able to do this week was limit opponents in the third period. Toronto, the Islanders and Winnipeg managed only seven shots apiece in the third period of their games this week.

There was that four-goal barrage on 17 shots in the Islander game that made for a dent in a pretty good week overall for Michal Neuvirth (49 saves on 53 shots; .925 save percentage). Then again, he did stop each of the other 34 shots he saw and recorded a shutout of the Toronto Maple Leafs, his third of the season and his first at Verizon Center this season. Neuvirth did get both wins for the week, though. Tomas Vokoun was not as fortunate. He played well in a 25-save performance in a 3-2 loss to Winnipeg. It is part of a bit of poor luck for Vokoun (or, more accurately, poor support) in which he has lost four of his last six decisions despite allowing more than three goals in only one of them (four goals on 11 shots in 32 minutes of a 5-2 loss to Ottawa on February 22nd). All-in-all the goaltending was good enough to have gotten the Caps two wins this week, although they won the game in which the goaltending was at its worst for the week, and the Caps let a game get away in which the netminding was not the problem.

Well, at least they scored one. Mathieu Perreault’s power play goal in the loss at Winnipeg doubled the Caps’ power play goal output over the past three weeks, leaving them 2-for-23 over their last 11 games. But it is that “23” that remains a problem, too. The three power play opportunities the Caps had against Winnipeg was their high for the week and only the second time in eight games this month in which they reached that number (they were 1-for-3 in their 4-2 win over Boston on March 10th). It wasn’t that the Caps didn’t get shots from the guys they need to get them. Brooks Laich, Dennis Wideman, and Alex Ovechkin among them. It was just that they didn’t have a large enough number of opportunities.

Again, opportunity and success – or in the Caps’ case, failure – went hand in hand, sort of. Twice the Caps allowed their opponent five power play opportunities, and in one instance they were burned for it. Washington allowed the New York Islanders both power play goals given up this week in five opportunities. They were more fortunate (or more practiced, given the Islander game) against the Winnipeg Jets, shutting out the Jets on five opportunities. That deserves praise, given that the Jets went into that game with a power play conversion rate of 42.3 percent in their previous nine games on home ice. In all, the Caps allowed two goals on 19 shots. The .895 save percentage for the week would rank 15th among individual goalies among those that have faced at least 250 shots on opponents’ power plays.

If you are not a scoring forward, paying the price is a bigger part of the resume. Jay Beagle continued to do his part and play the role of “energy forward” (no, really…energy is not a euphemism for “fighting” here). Eight hits and six blocked shots in three games. Matt Hendricks did his part, too, with 11 hits and three blocked shots. Joel Ward remains something of an enigma. His scoring has long ago dried up, but his score sheet is relatively blank in other respects as well. He had five hits and one blocked shot this week. A lot of his work is, and has to be, done along the boards, outworking opponents for possession. As long as he does that, the kinds of things that get picked up on the score sheet here, things that are more of an open-ice variety kind of measure, will not be reflected in his line.

Where you stand depends on where you sit. If you were standing in the offensive end of the ice for the Caps this week, the conclusion on faceoffs was, “they stunk.” They won 11 faceoffs in the offensive zone… for the entire week. Out of only 40 draws (27.5 percent). It was better in the defensive end, where Washington was 34-for-58 (58.6 percent). But the Caps are wasting too many seconds at the start of shifts in the offensive end hunting down pucks they lose off the draw. Just one more reason why this team is offensively challenged. Overall, the week would have been a lot worse if not for Jay Beagle’s going 25-for-39 (64.1 percent). In fact, they would have been at 41.8 percent for the week. Doing the little things well is what good teams do. And this was a little thing (or not) that was not done especially well this week.

The Caps have put together a couple of weeks on the plus side of turnovers. Part of it was getting 29 takeaways. And who led the Caps in that category? Jeff Schultz (four). One thing you don’t like to see, though, is the fact that Michal Neuvirth had three giveaways of his own in the two games in which he played. Goalies giving away pucks…that never ends well.

A 2-1-0 week needs to be looked at in context. But even that is hard to do. You could say that in a week in which the Caps had two road games that two wins was not a bad week. The won at home and split on the road. On the other hand, the last game of the week was a statement game of sorts, the kind of game a team with a more developed killer instinct might have won to drive a stake through the heart of an opponent’s post-season chances. If they reach the post-season, the Caps are going to have to go into hostile environments and find a way to win. Winnipeg is a difficult test of such mettle for any team these days, but in that context the Caps came up short. More disappointing, they came up short when all three of the “Young Guns” still in the lineup came up empty – a combined 0-0-0, minus-2, with seven shots on goal (of 22 total) in the 3-2 loss. It’s their team, they have to lead – on the ice and on the score sheet.

In coming up short in the one game of the week that had clearly defined playoff consequences, the Caps left the door open, not just for Winnipeg, but for the Buffalo Sabres, too. The Caps will get another opportunity to drive a stake into the hearts of each of those teams, but that is a tale for TWTWTW down the road.
Posted by The Peerless at 6:37 AM No comments: