The Peerless Prognosticator is ON THE AIR!!! -- Game 59: Jets at Capitals, February 19th

The Washington Capitals return home on Tuesday night following their longest road trip of the season, a successful 3-1-0 trip that left them just one point out of second place in the Metropolitan Division going into Wednesday night’s games.  The Caps will try to get their brief two-game home stand off to a good start when the Winnipeg Jets take Verizon Center ice on Thursday night.

Home ice has not been as friendly to the Caps as they or their fans might like this month, the Caps holding a 2-2-0 record at Verizon Center in February.  One of the things contributing to the treading water effort has been special teams, a case of taking with one hand (power play) and giving back with the other (penalty kill).

Washington is 3-for-13 with the man advantage in their four home games this month.  The 23.1 percent conversion rate was consistent with their overall performance this season, but it was hard earned in one respect.  The Caps managed only 15 shots on goal in 24:28 of power play ice time.  Their performance against the Philadelphia Flyers was perhaps the oddest of all.  Washington did convert one power play in six chances by t managed only three shots on goal in 10:11 of ice time while allowing two shorthanded shots on goal.

While the Caps’ power play at home this month cobbled together three goals, the penalty killers were giving it all back, going 4-for-7 (57.1 percent).  It was not that the Caps were that inefficient on the penalty kill, allowing 13 shots on goal in 11:11 of shorthanded ice time.  And one power play goal scored on the Caps was an empty netter Philadelphia’s 3-1 win over the Caps on February 8th.  It was just something of a waste of having allowed so few opportunities.

As for the Jets, they will be playing Game 8 in the post-Evander Kane era of the franchise.  Since Kane’s last appearance with Winnipeg on February 2nd (he was traded to the Buffalo Sabres on February 11th but was out with injuries and or disgruntlement after his appearance against Calgary on the 2nd), the Jets are 4-1-2, their only loss in regulation coming in Nashville against the Predators, 3-1, on February 12th.

In those seven games the Jets and their opponents each scored a combined 19 goals, five of the games decided by one goal, all in extra time.  Winnipeg has had an active special teams life in those seven games as well, hitting on seven of 25 power play chances (28.0 percent) and killing 22 of 28 shorthanded situations (78.6 percent).  The distressing part of the latter, from a Winnipeg perspective, is having allowed two power play goals in each of their last three games on a total of 15 power play chances allowed.

As for Winnipeg’s individual efforts in their first seven games post-Kane, Bryan Little has stepped up in a big, if a bit odd way.  Little is 4-5-9, minus-1, in those seven games, four of which featured multi-point efforts on his part, the other three games left blank as far as points go.  Five of his nine points (three goals and two assists) have come on the power play.  In 37 career appearances against the Caps, Little is 11-6-17, even.

What the Jets will be missing in this game is the contribution of former Capital Mathieu Perreault, who suffered what is described as a “significant” lower body injury Monday night in a 5-4 Gimmick win over the Edmonton Oilers, after which he was seen in a walking boot.  Perreault might miss the rest of the regular season. http://sports.yahoo.com/blogs/nhl-puck-daddy/jets-lose-mathieu-perreault-for-possibly-rest-of-regular-season-185247087.html Before his injury on his second shift less than five minutes into the contest against the Oilers, Perreault went 1-4-5 in his previous five games.  He is the Jets’ fifth-leading point producer this season and third-leading goal scorer (18-18-36).

Perreault’s absence will put some additional pressure on the assets coming back in the Kane trade to Buffalo – defenseman Tyler Myers and winger Drew Stafford.  Each has played in three games for the Jets since the trade, and each has a goal for their new club.

The Jets have had trouble settling on a goaltender.  Ondrej Pavelec has started 33 of the Jet’s 59 games, while Michael Hutchinson has started the other 26 games.  Things might be sorting themselves out, though.  After a fine, if unlucky, start to the season in which he went 7-6-2, 1.99, .928, with one shutout over his first 16 appearances, Pavelec has gone 6-6-5, 3.05, .895 in his last 19 appearances.  On the other hand, Hutchinson has lost consecutive games in regulation only once this season (a three-game streak to close January and open February) and comes into this game having won his last three appearances despite a save percentage of just .889 in those games.  Still, Hutchinson has displayed more consistency in his game than has Pavelec, and while he is a rookie, it may well be on him that the Jets rely in goal to maintain their playoff-eligible status down the stretch. 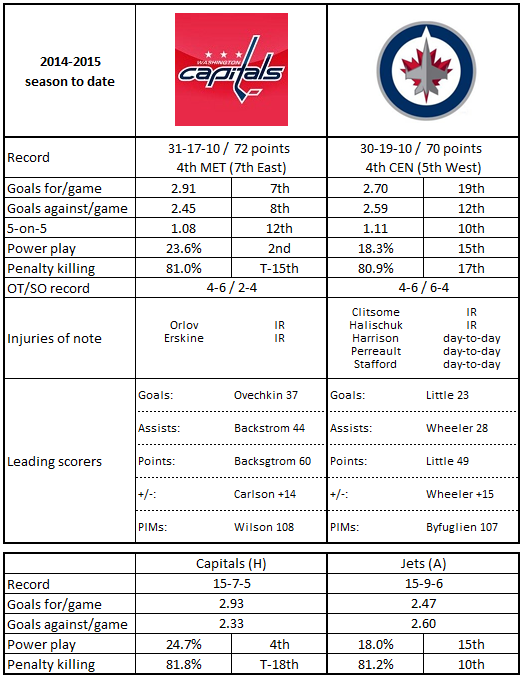 1.  Winnipeg was among the leaders in minor penalties taken last season, finishing fifth with 333.  This year the Jets lead the league in minors (285) and are on a pace for 396, which would surpass the 379 minors that Ottawa took last season to lead the league.

4.  The Winnipeg “Jets?”  Sure.  No team has scored first in more games this season than Winnipeg (36 times in 59 games), only four teams have scored more first period goals than the 55 scored by the Jets (Chicago, the Islanders, Dallas, and Pittsburgh), and only three teams have scored more combined goals in the first and second periods than the 111 scored by Winnipeg (Tampa Bay, the Islanders, and Dallas).

1.  The Caps are working on a modest 10-for-10 penalty kill over their last three games.  It is the first time this month they have put together a three-game streak of not allowing a power play goal.

4.  If Winnipeg starts fast with their goal scoring in the first and second periods, the Caps end with a finishing kick.  Washington is tied for sixth in goals scored over the second and third periods this season (118, with Dallas).

When not enforcing team discipline, defenseman Dustin Byfuglien spends his time on the ice as one of the better offensive defensemen in the league this season.  His 40 points is tied for sixth going into Wednesday’s games, and his 14 goals is tied for third among defensemen.  Since his first full season in 2007-2008 with Chicago, only Shea Weber has more goals among NHL defensemen (although Byfuglien scored a portion of those as a forward).  He is 2-5-7 in his last five games, one of his goals being the overtime game-winner in the Jets’ 2-1 win over Minnesota on February 10th.  In 22 career games against Washington, Byfuglien is 5-7-12, minus-6.

Eric Fehr scored the fourth and final goal in the Caps’ 4-0 win over Los Angeles at Verizon Center on February 3rd.  He does not have a point since, a streak that has reached seven games, his longest streak of games without a point this season and his longest since a 10-game streak in January 2014.  Even with the recent slump Fehr is tied for second on the team in goals scored (16) and is seventh in points overall (24).  The odd part about his goal scoring is in how little of it comes at home, just six of his 16 goals.  In 26 career games against the Jets he is 5-5-10, plus-7.

The Caps have played solid hockey for quite some time now, especially at even strength, something they could not say last season.  A bonus random fact will suffice to make the point.  Last year, Joel Ward and Steve Oleksy led the team in plus-minus at plus-7.  Going into their game with the Jets, six Caps are plus-10 or better.  It is why the Caps have improved their ratio of goals scored-to-goals allowed at 5-on-5 by 20 percent (from 0.90 to 1.08).  But even when they do not score at even strength, they can find a way to win, as evidenced by the win over Pittsburgh on Tuesday.

Winnipeg has done quite well at the expense of the Metropolitan Division this season so far with a 7-3-3 record.  They have, however, lost their last two contests against the Metro, at Pittsburgh (a 5-3 loss) and at Philadelphia (a 5-2 loss).  There is no reason to think the third time on the road in the Metro in the last three weeks will be the charm for the Jets.

Posted by The Peerless at 7:22 PM No comments: