The Peerless Prognosticator is ON THE AIR!!! -- Caps at Maple Leafs, April 5th

The Caps take to the road to night for their last regular season visit to Canada, a contest against the Toronto Maple Leafs at Air Canada Centre. And in the Leafs, the Caps find one more desperate team. In fact, the Leafs are perhaps the most desperate one they will have played lately, for Toronto is in a must-win situation.

“Fate rarely calls upon us at a moment of our choosing.”

“I will accept this burden with all that I am!”

Fine…but you don’t look like a Maple Leaf, not with the metal accoutrements.

“There is a thin line between being a hero and a memory.”

Well, look pal, I’m not going to forget that get-up. What are you, anyway?

"My name is Optimus Prime. We are autonomous robotic organisms from the planet Cybertron." 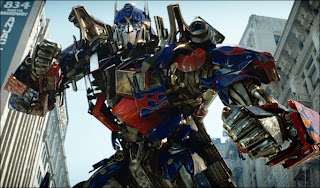 No kidding. And you are here to…

The Caps and Maple Leafs are teams with similar ambitions approaching them frm opposite ends of the playoff spectrum.  For the Caps, it is a matter of seeding, of trying to catch the Philadelphia Flyers for first in the East.  For the Maple Leafs, it is looking up at a couple of teams separating them from the playoff-eight.  Overall, the teams' numbers compare as follows: 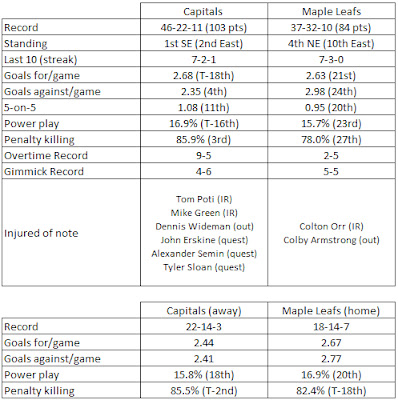 For the Maple Leafs, this is it. They have to win. They have to have two points any way they can get them. There is no more margin for error. And that is going to put just that much more pressure on rookie goaltender James Reimer. “Optimus Reim” has become the face of this year’s Leafs team and might be the brightest light for their future, quite an achievement for a player who had one appearance this season before New Year’s Day. And that was hardly announcing his presence with authority – 14 minutes of mop-up duty, stopping the four shots he faced in a 6-3 loss to Atlanta on December 20th. But in 34 appearances this season he has a respectable 2.54 goals against average, a more than respectable .922 save percentage (seventh in the league and tops among rookie goaltenders playing in at least 25 games), and three shutouts (tied for third among rookie goalies), while posting a record of 20-8-4. He is coming into this game on something of a roll, too, at least in terms of wins and losses. In his last ten appearances he is 8-2-0, 2.54, .923, and a shutout. In an odd quirk of his progress up the development chain, Reimer played in six games for Capitals ECHL affiliate South Carolina in 2008-2009, posting a perfect 6-0-0 record (1.32, .961, two shutouts). Tonight will be Reimer’s first career appearance against the Capitals.

While Reimer was going 8-2-0 in his last ten appearances, Toronto has been getting balanced contributions from their top scorers. Phil Kessel is 3-8-11, even, in his last 11 games (two of his three goals being game-winners). Clarke MacArthur is 2-9-11, plus-1 in his last dozen contests, and Mikhail Grabovski is 2-3-5, plus-4 in his last five games.

Kessel in particular seems to have found his rhythm. Since enduring a five-game streak without a point in late January/early February, he is 11-16-27, minus-1 in his last 26 games. Kessel has not gone consecutive games without a point in that 26-game span. And in that time he has taken only eight minutes in penalties. That minus-1 in his last 26 games might not look especially impressive, but compared to his going minus-20 in his first 53 games it looks almost “Selkian.” The player the Caps passed on in the 2006 draft (well, they did take Nicklas Backstrom) has not made the Caps pay for the insult too often in his career. In 16 career games against the Caps he is 3-6-9, even.

MacArthur is in his first season with the Leafs, and he has made the trip worthwhile. He leads the team with 40 assists, and his 21 goals is a career best in five seasons. MacArthur is another player who appears to have found a comfortable rhythm. Since a six-game stretch in which he has only one assist in early February, he is 4-12-16, plus-2 in his last 20 games. MacArthur is 6-1-7, plus-2 in 15 career games against Washington.

On defense, the departure of Tomas Kaberle to Boston means that Dion Phaneuf is the leading scorer among blueliners for the Leafs. In his sixth season in the NHL and wearing the “C” for the Leafs, he is also going to have a job mentoring the likes of Luke Schenn (in his third season) and Carl Gunnarsson (in his sophomore season) for the Toronto defense. Phaneuf is not the offensive force he was in his first few years, when he averaged 53 points in his first three years in Calgary. But attention must be paid to his shot from the outside, and he remains one of the big hitters in the game, 12th among all defensemen in hits this season. He has been off and on lately, following up a three-game points drought with a 1-3-4 stretch over three games, then a scoreless last two games. It is a little surprising that he has only four career games against the Caps, but he does have three assists in those games.

Mikhail Grabovski might need to be heard from in this game and pick up his scoring pace if the Leafs are to stay alive in the Eastern Conference playoff race. And that certainly isn’t out of the question, his bringing a 2-8-10, plus-5 career mark over 10 games against the Caps into this game. He has been somewhat streaky lately, though. Before his 2-3-5 scoring line over his last five games, Grabovski went four games without a point. And before that, he was 3-6-9 over eight games. Which one shows up tonight might be the difference between living to play another day and looking up tee times for mid-April.

It is tempting to say, “Semyon Varlamov,” since he might be getting perhaps a last audition to be the Caps playoff goaltender this season. However, John Carlson has become a key cog in the Caps’ fortunes with the absences of several defensemen over the past few weeks. With Mike Green and Dennis Wideman out, Carlson is the minutes leader with almost 23 minutes of ice time a game. And he is the, for lack of a better term, “point man” on the power play. If he can chip in a point or two on the man advantage, it not only helps the Caps chances tonight, but gives them alternatives going forward in anticipation of the day Green or Wideman return to the lineup.


1. It’s Toronto, not “TORONTO!!!” Toronto is one of those places that can either bring out the best in a player or have him quaking in his boots in the setting. But the Leafs are only 5-3-3 in their last 11 home games. Deciphering Bettman math, that’s losing more often than they win, and that includes having won their last two home games. It’s still just a 200 by 85 foot ice sheet (or 61 by 26 meters for you metrically-inclined readers).

2. Score first. This is rather simple. Toronto might not have the best record in the NHL, but only one team in the league (Vancouver) has lost fewer games in regulation when scoring first (21-4-6). The same can be said for the Caps (24-4-6). If you want one indicator of who the winner is going to be, this is likely the one.

In the end, both teams have something to play for, but Toronto has everything to lose in this game. Lose, and they’re done. Hard to focus the mind any sharper than that. And that should make the first ten or so minutes of this game especially important. Toronto should be looking to get off fast to establish momentum and get the crowd into the “Go-Leafs-Go” chant early. And that makes it important for the Caps to get back to that old, boring, clog the middle, defense-first style that served them so well since that ugly 0-6-2 streak in December. They looked too much like last year’s team over the last couple of games, squeaking by with 4-3 and 5-4 overtime wins. A nice, quiet, low scoring game would be in order here…

"Now all we need is a little energon, and a lot of luck."

Well, tonight the luck runs out.