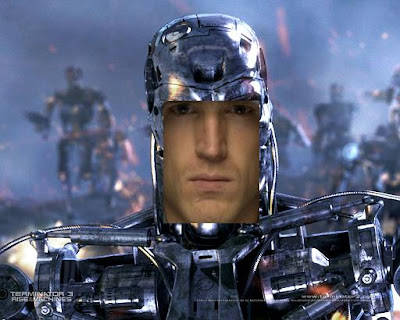 Posted by The Peerless at 12:58 PM No comments:

The Peerless Prognosticator is ON THE AIR!!! -- Game 53: Panthers at Capitals, February 7th

- Division opponent?... check
- Playoff position at stake?... check
- Home game in front of supportive fans?... check
- Team you would like to get a measure of revenge against because they lead the season series so far this season?... check

OK, it is not Montreal or Philadelphia or the Rangers. It is the team right in front of them, standing there eating your lunch in while you look on.

If the Caps can’t get excited about this game -- even in the wake of injuries -- the word “professional” doesn’t apply, let alone the word, “contender.”

The Washington Capitals host the team directly in front of them in the standings, the Florida Pantthers, in a Southeast Division matchup that could put the Caps right back in the playoff mix or signal the beginning of the end of their competitive portion of their season.

The Panthers visit Verizon Center sitting on top of the Southeast Division and having earned points in four of their last five games (3-1-1), including a 4-2 win over the Caps just last Wednesday. This will be Florida’s fourth straight game against a Southeast Division foe, a stretch that began with the win over the Capitals. Since then they beat Winnipeg at home, 2-1, then lost in Tampa Bay, 6-3, on Saturday.

At one level, the Caps should consider themselves fortunate that the Panthers have been meandering through their schedule over the last six weeks. Over the last two months, starting with a 2-1 overtime loss to the Buffalo Sabres that snapped a three-game winning streak on December 9th, the Panthers are 8-8-7. On another level though, the Caps should be kicking themselves from here to St. Swithin’s Day (July 15th) over their incapacity to put the Panthers and the rest of the Southeast Division away. On December 9th, as the Panthers were starting their journey of mediocrity, they held a six point lead over the Caps in the Southeast. In the intervening two months the Caps have outpointed the Panthers by five standings points. It does not say much for the Caps in that time. Here is how the two teams stack up this season so far: 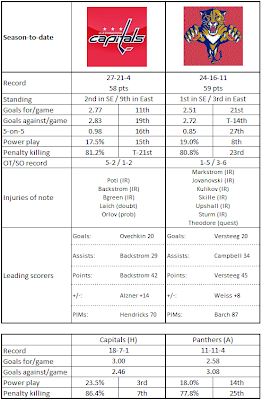 1. Those eight wins the Panthers have since December 9th. Six of them have been by one goal, and three of them have come in extra time. The eight losses in regulation? Five have come by three or more goals.

3. Caps Alumni, Part I… Tomas Fleischmann is 2-2-4 in his last four games, including a pair of assists against Washington last week. Despite the four points, though, he has been on the ice for six of the last eight goals scored against the Panthers.

4. Caps Alumni, Part II… Matt Bradley has only one goal in his last 31 games. He is also dialing down the fisticuffs. He has four fights so far this season (10 last year with the Caps), none of them since November 13th, a fight against the Flyers’ Zac Rinaldo that was deemed by the voters at hockeyfights.com as his only win of the season.

5. Caps Alumni, Part III… Jose Theodore is day-to-day with a knee injury. He has only two appearances since the new year began and has only one win in seven appearances since December 18th. It is unfortunate for Theodore. In his first 25 appearances this season he allowed more than three goals only three times in compiling a record of 13-7-4. Since then, however, he is 1-2-1 in six appearances, with a 2.67 goals against average and a .899 save percentage.

In the last ten games…

1. The Caps have scored more than three goals once (a 5-3 win over Boston).

2. The Caps have played in four games that ended in a shutout, winning two and losing two. All of them were by 3-0 scores.

4. The Caps have allowed eight power play goals in 36 opportunities. Over the full season to date, that 77.7 percent penalty kill would rank 28th in the league. But there is that whole allowing only 15 even strength goals in ten games thing (they also allowed a shorthanded goal).

5. The Caps have been out-shot by 324 to 239. They hit the 30 shot mark once and allowed opponents at least 30 shots eight times. Tomas Vokoun and Michal Neuvirth have combined to stop 298 of 322 shots. That .925 save percentage (which would be good for seventh in the league) is the only thing keeping the Caps within striking distance of a playoff spot.

Sean Bergenheim almost single-handedly ruined the Caps’ playoff season last spring with four goals in the four-game Tampa Bay sweep. This season he is 1-1-2 in two games against Washington. And, he has five of his nine goals this season over the last seven games (5-2-7, plus-3). Some players just seem to have another team’s number, and Bergenheim seems to have the Caps’ at the moment. Plus, he’s coming into this game as a “hot” player. Attention needs to be paid.

Marcus Johansson ended a five-game streak without a goal by getting the Caps’ lone marker in the 4-1 loss to Boston on Sunday. It might be just in time with Brooks Laich likely to miss this game to a knee injury suffered in that game on Sunday. Johansson is as close to Laich’s “Mr. Versatility” type of play as any Cap – when he is on his game. And frankly, he hasn’t looked especially sharp lately (for the Caps, who has?). He might be getting a few more shifts to help fill in for Laich’s absence, and if the Caps are to win – if they are to keep from falling any further in the standings as the Caps try to regain a measure of health – Johansson is one of those players who has to step up. Fun fact… Tuesday is his most productive day of the week so far this season (1-7-8, plus-3).

1. Convene the Committee. When you have three important cogs out of the lineup – Nicklas Backstrom, Mike Green, and Brooks Laich – the trick is for guys to step up to the moment, but not in a way in which they try to do it all themselves. The Caps do not have enough talent to be able to do that (even if Alex Ovechkin turns back into “Alex Ovechkin”). Contributions have to come from up and down the roster, but by avoiding the individualistic approach. Wins will have to come “by committee.”

2. Respect. The Caps did not appear to give Florida much respect the last time these clubs played, and they got burned for it in a 4-2 loss in Florida. The Panthers have had a long run of poor seasons, but the fact is, this team is ahead of the Caps. And if the Caps treat them like the Panthers of the previous few seasons, then Florida will skate off with another win, and another nail will have been driven into the coffin of the Caps’ playoff chances.

3. Pick ‘em up. Goaltending has pretty much kept the Caps in it. When it has faltered a bit over the last ten games, the Caps just haven’t had enough offense to pick their goalies up. And there is that whole matter of allowing far too many shots. A .925 save percentage when you are giving up 32.4 shots per game (as is the case over the last ten games) still means you are allowing almost 2.5 goals per game (not including the two empty netters opponents have scored). It is not a long term formula for success, and not a short term one for this game, either.

In the end, they are not Montreal or Philadelphia or Pittsburgh. But the Florida Panthers are in first place in the Southeast Division. They might not be playing like it lately (that whole 8-8-7 record since December 9th), but there they are. The Caps do not have the luxury of treating this opponent as anything but a better team at the moment and need to provide an effort that reflects that reality. If they don’t, it will be a long night. Maybe they learned their lesson last week in Florida.

Capitals 3 – Panthers 2
Posted by The Peerless at 6:39 AM No comments: