Tonight the Caps go back to their road whites, so here is what they leave behind in the throwbacks, so far... 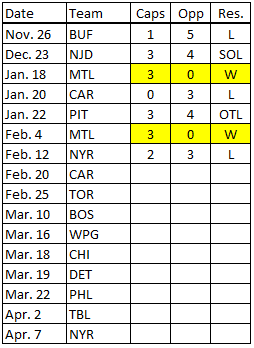 Does Less Than Four Matter?

In the end, it’s wins and losses. Right now, the Caps have not enough of the former, too many of the latter. One line of argument goes that the too few wins to date is a product of too few games in which the big players are in the lineup. For the Caps, having the big four of Alex Ovechkin, Nicklas Backstrom, Alexander Semin, and Mike Green in the lineup has been an all-too-rare occurrence. Has it mattered? Well, there are a variety of player combinations to look at to see if presences and absences are attached to win-loss records. At the 25-games-left point of the season, what does it look like? 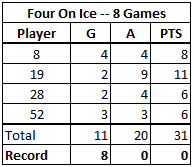 The Caps are 8-0-0 this season when each of the big four is in the lineup. Seven of those instances came in the 7-0-0 start to the season, the eighth game coming in a 3-1 Veterans Day win over New Jersey. In all other games, the Caps are 20-23-5. And that record includes the 16-14-4 record compiled under Dale Hunter, who has not had the good fortune to have those four in the lineup at the same time in any of the 34 games he has coached.

Having those four in the lineup mattered in terms of offense. In those eight wins the big four were 11-20-31 overall and were held as a group without a point only once. They were scoreless and a combined minus-7 in a 6-5 Gimmick win over Tampa Bay on October 10th. It is worth noting that while much attention has been focused on the fact that those eight games represent eight of the nine games played by Mike Green so far this season, Nicklas Backstrom was 2-9-11 in those eight games to lead the big four in points. Overall in those eight games, the Caps outscored their opponents by a 32-15 margin. 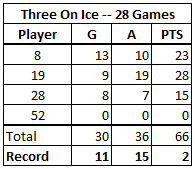 This is more or less “The Green Effect.” The Caps have played 28 games with three of the big four in the lineup. Of those 27 games, Mike Green was the missing man in 26 of them (Alexander Semin was out of the lineup in the 3-1 win over Calgary on January 3rd). In the 27 games overall, the Caps were 11-15-2. And of the group, only Nicklas Backstrom averaged at least a point per game (9-19-28 in 28 games). The Alexes’ contributions dropped significantly, Semin’s dropping off a cliff – 8-7-15 (a 44-point pace over 82 games). It is worth noting that in the 26 games he did play as one of the remaining three of the big four, Semin had only two power play points (goal, assist).

With three of the big four in the lineup under Dale Hunter, the Caps are 8-6-1. In all but two of those games, the three have been Ovechkin, Backstrom, and Semin (Backstrom missed one game, Semin the other). The Caps have been reasonably successful under Hunter with three of the four in the lineup, and with Hunter having had no games with all four, it is not entirely clear that injuries – in this case one injury – have made a big difference under Hunter.

One Pair is a Weak Hand to Bet 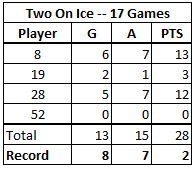 In 17 games in which only two of the big four dressed, the Caps are 8-7-2. In 14 of them, Alex Ovechkin and Alexander Semin were the pair on the ice. Green missed all 17 games, Backstrom missed 14, and Semin missed three. Backstrom had three points in his three games as one of a pair (all with Ovechkin), and Semin had 12 points in the 14 games he played (again, all with Ovechkin). It was Ovechkin’s production that lagged a bit here and merits notice. He was 6-7-13 in the 17 games in which he played paired with either Semin or Backstrom. Of those games, Ovechkin had a pair of assists in the three games he played with Backstrom, one coming on a Backstrom goal, the other on a goal by Troy Brouwer. In the 14 games in which he was paired with Semin, Ovechkin had six goals of his own, but only five assists, a pace slightly below that which he has had over the entire season (29 versus 31). He has not been playing with linemates who can pick up some of the goal-scoring slack, and this has been slightly worse in the absence of Green and Backstrom.

All but one of the 17 games with a pair of the big four in the lineup have been played under Hunter to a record of 7-7-2. This is the hand that the Caps have holding for 14 of the last 18 games they have played, trying to bluff their way against teams at the table holding better hands. And until the Caps can make it at least three of a kind with the return of Mike Green or (pray for miracles) drawing two cards that say “Backstrom” and “Green,” treading water at .500 might be as much as Caps fans can realistically expect.
Posted by The Peerless at 7:02 PM No comments:

If the season ended today...

(graphic from NHL.com)
Posted by The Peerless at 5:25 PM 1 comment:

The Peerless Prognosticator is ON THE AIR!!! -- Game 57: Capitals at Panthers, February 17th

We’re back, after a brief hiatus, pretty much where we left things when we last posted a preview for Game 54. In fact, it’s worse. We go away for a few days and…

-- The Caps lose two in a row.
-- The team’s cornerstone is likened to a “rock star” by an associate coach who isn't normally with the team on a regular basis, and not in a good way.
-- The cornerstone gets into a bit of a scrap with one of the team’s few remaining healthy and moderately productive defensemen, and the GM jokes that it was “the rock star against the all-star.”
-- The team calls up the prospect goalie to play because the number one has the flu and the number two isn’t standing on his head when he is in the lineup (he’s had three starts in the last four weeks, all losses).
-- Oh, and the team is raising ticket prices, as if McDonald’s decided that a stale bun, limp lettuce, rancid sauce and a cheap grade of meat merited a $5 price for their Big Mac (drive thru special handling price extra).

And now, the team heads off on the road to play five of their next six games away from Verizon Center leading up to the trading deadline at the end of the month.

Meanwhile, in sunny south Florida, the Panthers are 5-3-0 in February. It’s not scorching the earth with their hot play, but it has been good enough to open a little room – four points – between themselves (65 points) and the Capitals (61 points). The 5-3-0 record has come in rather typical fashion for the Panthers. They have been outscored, 22-21 in those eight games, all three losses coming by at least three goals. When they stink, they reek. Or is that the other way around? 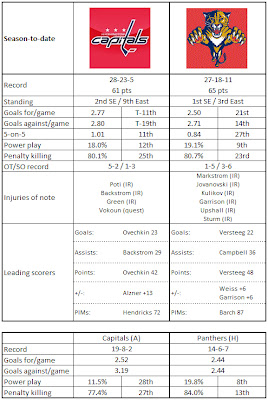 1. Florida is 1-5 in games settled in overtime, they have lost six of nine trick shot competitions. Only two teams in the league have fewer wins in extra time (Anaheim and Carolina), but this 11 points earned just by getting to – and losing – in extra time is the difference between third in the East and being a lottery pick.

3. Their skaters aren’t much to brag about, either. The Panthers have only seven goals on 32 shots in nine après-overtime decisions. Only Stephen Weiss has more than one (two).

4. Florida has not yet played past the 60 minute mark in any game in February. The last time the Panthers went a full month (not including the abbreviated April schedule) without an extra time game was October 2010.

5. If Florida scores first, it is a virtual guarantee of a standings point. They have earned at least one standings point in 24 of 25 games in which they scored the first goal (18-1-6).

1. It is no more than a month since the Caps won consecutive games. They beat Pittsburgh, Tampa Bay, and Carolina in succession, January 11-15. Since then they are 4-6-3.

4. If Florida stinks at shootouts, the Caps…well. Their shooting percentage among the skaters isn’t bad (4-for-12), but the goalies? Six goals on 11 shots (.455 save percentage).

5. For all the Caps’ woes on offense this season, only two teams have been shutout fewer times (Detroit, New Jersey) than the two occasions on which Washington was blanked. Those two shutouts came in a four-day period last month in losses to the Islanders and Carolina by 3-0 scores.

It really gets simple from here on out. The best players need to play like the best players down the stretch. Kris Versteeg seems to be keeping up his end of the bargain for the Panthers. He has five goals in his last ten games, including two in his last three. But despite being 5-4-9 in those games Versteeg is a minus-3.

Same goes for the Caps…their best players have to be their best players. Ovechkin is 5-4-9 in his last nine games (and plus-1), but something he has not seemed able to do with any regularity this season are two things – have a singularly dominating performance against a quality club, and to be able to pull his teammates along with him when he is having a good game. Those 23 goals he has is one thing – goal scoring is down in the NHL, and his goal-scoring slump has been prolonged. But those 21 assists in 53 games. He is on a pace to finish with 31 assists, which would be 15 below his career low (46 in 2006-2007).

1. Score First. Duh! No team has fewer losses in regulation than the Panthers (one) when they score first, and the Caps can’t afford to be giving away even stray standings points.

2. Beware the middle 20. Florida is not an especially high-scoring team in the second period, but if the Caps slip up here, it matters. Washington is one of only three teams not to have lost at all when leading after two periods (17-0-0), and Florida has not lost such a game in regulation (16-0-4).

3. Special delivery. If the Caps do not start winning on the road, they can kiss their playoff chances goodbye. They stink on the road largely because their special teams are awful on the road. So…better special teams, more wins. Logic.

In the end, this is as “must win” as a game can be with this much time left in the season. The Caps get no handicap for playing without key players, and those who remain healthy (Alex, Alexander, Brooks…this means you) have to dig deeper. Maybe it is still hard to take Florida seriously, given their recent history and their penchant for scraping together standings points by losing in extra time. But there the Panthers sit, four points ahead of the Caps. If they make it six, with 25 games left, the easiest path to the playoffs for the Caps – winning the Southeast – becomes so much harder.