The dreams, the dreams.  I really, really have to give up pepperoni, anchovy, and marshmallow fluff pizzas.  Now I’m dreaming of romantic comedies involving hockey players and coaches.

It is July 2013, and the Washington Capitals need a second line center.  Meanwhile, in Toronto, the Maple Leafs have a very good center who was misused into a role at the end of the bench by their new head coach.  The Leafs decided, to the surprise of many, to exercise their compliance buyout option of the player. The player called the coach an idiot on his way out the door.  The Capitals talked to the player a couple of days into free agency, but the player was about to go off on his honeymoon after getting married, and the team just didn’t have the resources to compensate him as he would have liked.

The days and weeks rolled on.  The player was incommunicado (honeymoons are like that).  The team professed its preference for another of its own players to fill the role of the second line center.  Meanwhile, it seems that everyone with a keyboard and a passing knowledge of hockey knew…just KNEW…that the team and the player were meant for one another.

So why wasn’t it happening?

Well, maybe it was.  Fast forward to early August.  Far from the madding crowds of Washington, Toronto, and the usual suspects of free agent bidders, the player and the coach met.  Mikhail and Adam, in Los Angeles.

Maybe it was a meet cute at a coffee shop on Sunset Boulevard.  And maybe, just maybe…

Mikhail: You know I'm so glad I didn’t sign early.  It’s just too much… general managers, media, my cleaning lady.  And I was just about to get married.  And I just would've ended up being some mercenary in their eyes that would have been blamed if things didn’t work out.

Adam: Why are you getting so upset? That was weeks ago.

Mikhail: Yes it was. They are a human affront to all players, and I am a player.

Adam: Hey, but this is different.  I think this can work for both of us.

Mikhail: How do you know?

Adam: What do you mean how do I know? I know.

Mikhail: I’m just tired of dealing with general managers and coaches.  I have to fool them just to get them off my back.  All players do it.

Adam: What are you saying, that they fake interest?

Mikhail: Why? Most players at one time or another have faked it.

Adam: Well they haven't faked it with me.

Mikhail: How do you know?

Adam: Because I know.

Mikhail: Oh, right, that's right, I forgot, you're a coach…you have a plan.

Adam: What is that supposed to mean?

Mikhail: Nothing. It's just that all coaches are sure it never happened to them and that most players at one time or another have done it so you do the math.

Adam: You don't think that I could tell the difference?

Adam: Are you OK? 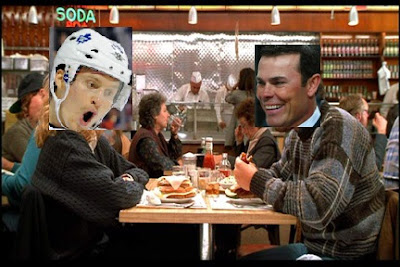 While at another table, a lady turns to a server and says, “I'll have what he's having.”

And we know how the story ended…

Countdown to Opening Night by the Elements: Number 36

If it’s Monday, we must be down to element number 36 in Fearless’ relentless walk through the rows of the periodic table and its relationship to the Washington Capitals.

Krypton has an important part in American culture.  It is, as most folks know, the fictional planet that is the native world of Superman.  It also had the unfortunate circumstance to have been destroyed.

“Krypton,” the element, has a far less romantic history.  It was discovered just before the dawn of the 20th century when two chemists – Sir William Ramsey and Morris Travers – evaporated liquid air.  The residue left behind included the newly discovered element Krypton.

Krypton is one of a class of elements referred to as “noble gases.”  Because of their physical properties, such elements are odorless, colorless, and have low reactivity with other elements.  Even the name “Krypton” suggests an element that is apart and secreted from other elements.  The name derives from the Greek word “kryptos,” which means “hidden.”

That is not to say that Krypton is entirely incapable of bonding with other elements.  There have been instances of the synthesis of compounds that include Flourine, Barium, Oxygen, among others.  And, Krypton does have uses that suggest a more flashy character.  Krypton-based bulbs can be used in photography to serve as an intense source of white light.  It can be used in energy-saving fluorescent lamps.  Its higher light power density than neon make it a suitable element for laser shows, expressing itself in the color red.

Here we have an element with a hook in popular culture, but that is a bit less interesting in the real world.  It exists as a gas and has little to do with its fellow elements, although it can show flashes of brilliance in certain applications.  What does that sound like?  Maybe a player who is a lot more sizzle than steak so far, who has been hidden away, who has not (yet) been inclined to play with others (at least in Washington), who has a bit of “flash” to his play and demeanor on the ice.  A player who has offered a lot of gas about where and when he might or might not play in his future.

Krypton… the “Evgeny Kuznetsov” of elements.

Posted by The Peerless at 12:04 AM No comments: