The Peerless Prognosticator is ON THE AIR!!! -- Game 14: Capitals at Lightning, February 14th

"Oh, if it be to choose and call thee mine, love,
thou art every day my Valentine!" 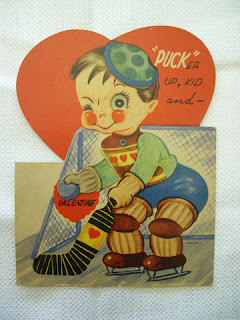 When the English poet Thomas Hood wrote those words in the 19th century, he probably was not talking about hockey as his every-day Valentine, but he might have been.

And we don’t have to buy lingerie or chocolates (unless that is your preferred manner of watching games and your snack food of choice).

On this Valentine’s Day 2013, the Washington Capitals have a date with the Tampa Bay Lightning at the Tampa Bay Times Forum.  Instead of flowers and candy the Caps will be bringing a two-game winning streak and 11 goals scored in their last six-plus periods of hockey.

They’ll need them.  The Lightning have been dominating at home, posting a 5-1-1 record.  Only Ottawa and San Jose have earned more standings points on home ice, and both teams have played one more game (in both cases an extra time loss) than have the Bolts.

Then again, Tampa Bay is on a five-game winless streak overall.  After beating Winnipeg on the first day of this month by an 8-3 margin, the Lighting have gone 0-4-1 and have scored a total of only nine goals in the process.

In those five games they are getting scoring from the players the Lightning need to score, but the problem is they are not scoring enough.  Steven Stamkos is tied for the team lead in goals in this five-game stretch with two, about half the rate at which he scored goals on his way to a 60-goal season last year.  Martin St. Louis has three assists in the five games, but that is a pace that is lower than he had in any of the last six full seasons; and, he has no goals in this stretch.

After Stamkos and St. Louis, the Lightning are not getting much recently in offense.  Victor Hedman as two goals and is quietly putting together a whale of a season offensively, but no one else has more than one goal over the last five games for the Lightning. Add to that the fact that only Hedman, Matt Carle, and Vincent Lecavalier have as many as three points, in addition to Stamkos and St. Louis, and one can see that the Lightning are getting little in the way of secondary scoring.

Defense and goaltending has been an issue for the Lightning in recent years, and it continues to be so far.  Anders Lindback, obtained from Nashville to address the netminding issue, has appeared in ten of Tampa Bay’s 12 games to date.  However, he ranks 32nd among 43 qualifying goalies in goals-against average and 26th in save percentage.  He is winless in his last four appearances and has a 3.11 goals-against average and .888 save percentage to go with his 0-2-1 mark in those four appearances.  Part of the trouble is shots.  Lindback is facing 30.4 shots per of ice time.  There are only seven teams facing shots with more frequency.

Here is how the two teams’ numbers side-by-side: 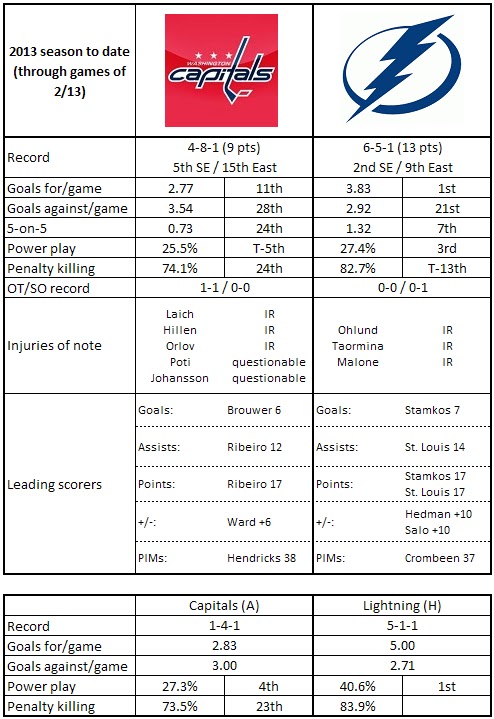 1.  That 3.83 goals per game scoring offense for Tampa Bay?  Sounds impressive, doesn’t it. It should.  It is almost precisely what the Caps averaged over the entire 2009-2010 season (3.82) on their way to a Presidents Trophy.

2.  Tampa Bay has averaged 5.67 goals in six wins, 2.00 goals in six losses  This is not a team that steals wins with defense and goaltending.

5.  As you might expect for a team that lives and dies by scoring goals in volume, the Lightning struggle in one-goal games.  They are 0-3-1 in such games (only one of two teams still winless).  They’re not so great in two-goal games, either (1-1).  Blowouts?  Blowouts they can do (5-1 in games decided by three or more goals).

1. The Caps have only one regulation win in their last seven visits to Tampa Bay (2-4-1 overall).

2.  The Caps are 7-for-12 on the power play dating back to the third period of their 6-3 loss to Pittsburgh on February 3rd.  They are working on a five-game streak in which they scored at least one power play goal.  It is their longest such streak since a five-game streak in Games 3-7 from October 13th through October 22nd last season (the last five games of the Caps’ seven-game winning streak to start the 2011-2012 season).  If they get one in this game it will be their longest streak since getting at least one power play goal over a seven-game period from March 6 through March 18, 2011.

3.  Only Colorado has a worse differential in time spent on the power play and time spent killing penalties in road games than the Caps’ 3:11 per game.

5.  Of the 22 skaters that have dressed for the Caps this season, 21 have recorded points.  Only Jack Hillen (injured in his only appearance to date) is without one.

With Ryan Malone out for 3-4 weeks as a result of going all World Cup during Tampa Bay’s pregame before the New York Rangers the Lightning need to get someone to step up and provide secondary scoring.  Teddy Purcell scored 24 goals last season and was rewarded with a three-year contract extension that will pay him $4.5 million per year, starting next season.  However, this year Purcell has only two goals in 12 games, none in his last five (coincidentally the length of the winless streak the Lightning have).  He does have six goals in 16 career game against the Caps, so this might bear watching.

With Mike Ribeiro continuing his productive play and Alex Ovechkin resembling the Ovechkin with whom Caps fans are more familiar, it remains to get Nicklas Backstrom’s game elevated to accustomed levels of production.  Backstrom has one goal in 13 games, none in his last five.  He had two assists in the 6-5 win over Florida on Tuesday and averages almost a point a game against the Lightning over his career (5-23-28 in 29 career games).  One would like to think that it is a matter of time, that a player with a 12.0 percent shooting percentage over his career coming into this season would improve on a 3.3 percent mark he carries at the moment (one goal on 30 shots).  Time, however, is a commodity in limited supply.

1.  Discipline.  That 40.6 percent home power play really does leap off the page for the Lightning.  No team is within six percentage points of them (St. Louis: 34.5 percent).  And the Lightning are averaging 4.8 chances per game on home ice.  The Caps need to keep this number to three or fewer.  They have been able to do this in four of their last six games.

2.  Manage shots.  In January the Caps averaged 31.6 shots on goal allowed per game.  They went 1-5-1.  So far in February they have allowed on average 27.5 shots on goal.  They are 3-3-0.  It is a work in progress that will be tested in this game, especially if Tampa Bay puts extra effort in trying to turn around a stretch in which they have averaged only 23.4 shots on goal per game over this five-game winless streak.

In the end, the Caps are still in last place in the league, despite their modest two-game winning streak.  They are still five points out of eighth place.  They still have seven teams to climb over to get there.  But they have stopped the bleeding for the moment, and that is what teams that are at the bottom have to do.  The Caps are going to have to string together, if not a long winning streak, then a long and sustained stretch of games in which they lose only a game or two.  The Caps looked good against the Lightning for two periods in the season opener at the Tampa Bay Times Forum before wilting in the third period.  They need to find a way to make the last 20 minutes a happier ending this time around.  Otherwise, Caps fans will be left to sigh over an opportunity lost.  But as Shakespeare once remarked…

"Love is a smoke made with the fume of sighs."