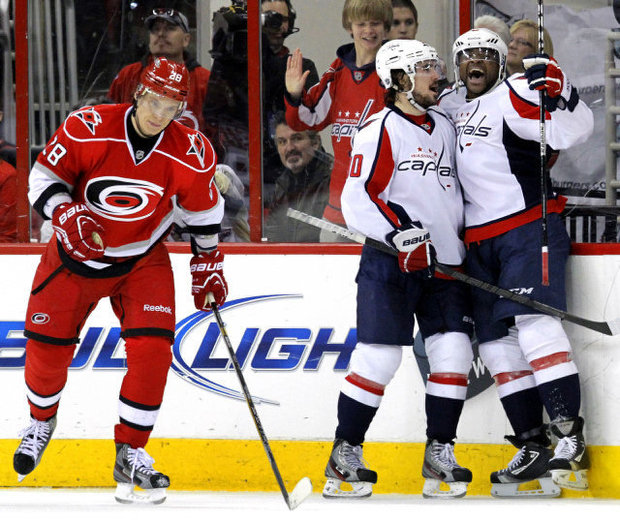 The fourth game in the six-pack of games that mattered in the 2013 season of the Washington Capitals was one that the Caps had been inching toward for quite some time, one that would get them to a milestone that represented their base camp for a final assault on a playoff spot…

The Background:  When the Washington Capitals took to the road to take on the Carolina Hurricanes on April 2nd, the Caps and the Hurricanes were sitting outside the playoff eligible top-eight in the Eastern Conference, tied for tenth in the conference in points.  With the season almost down to its last dozen games, the loser of this game would have the chore of trying to make up points and having to climb over three teams to make the playoffs.

Why it mattered:  This was Washington’s fifth try to get to .500 for the season, and they were 0-3-1 in their previous four attempts.  It was perhaps their best chance to do so.  Carolina came into this game having lost eight of nine games (1-7-1).

Carolina looked to bust out of their slump early in this contest.  Jiri Tlusty backhanded a loose puck past goalie Braden Holtby at the 11:32 mark of the period with three Caps within arm’s length of Tlusty looking at the ice for the puck.  Tlusty doubled the Carolina lead less than three minutes later on a power play, taking a feed from Marc-Andre Bergeron and finding a hole with a wrister past Holtby.

However, teams in slumps get into slumps for a reason, and one of them is giving away the momentum they generate with early goals.  That was the case late in the period when Alex Ovechkin halved the lead with just 39 seconds left when he took a pass from Nicklas Backstrom just inside the Carolina blue line and wristed the puck just inside the far post past goalie Dan Ellis’ blocker.

Another reason teams get into slumps and stay there is giving up goals early in periods, and that is just what Carolina did in the second period.  Mike Green lit the lamp just 42 seconds into the period when he banged a slap shot off the post to Ellis’ right and in on a power play to tie the game at two apiece.

Tlusty restored the Hurricanes’ lead by completing the hat trick just 70 seconds after the Green goal on a power play, but that would complete the fun portion of the evening for the Hurricanes.  Green tied things up at 4:26 when Nicklas Backstrom left him the puck and pushed the defense back by going to the net.  Green jumped into the void and snapped the puck over Ellis’ blocker to tie the game once more at three apiece.  That goal would end Ellis’ night in favor of Justin Peters.

Peters fared no better.  At 11:06 Alex Ovechkin got his second goal of the game on a play that started with a Carolina turnover.  Defenseman Joni Pitkanen tried to move the puck up the left wing wall, but the pass struck Ovechkin in front of the players bench and skittered to the middle of the ice. Backstrom picked up the puck there and headed into the Carolina zone accompanied by Ovechkin on a 2-on-1 break.  Backstrom laid the puck across onto the tape of Ovechkin’s stick and it was just a snap shot from there over Peters’ glove, and the Caps had the lead.

Carolina compounded their problem by allowing the Caps a shorthanded goal with under a minute to play in the second period.  It was another turnover, this one occurring when Marc-Andre Bergeron crossed the Caps’ blue line and tried to feed the puck to Eric Staal at the right wing wall.  The pass was behind Staal, and when the loose puck caromed off the wall, Marcus Johansson was first to it. He and Joel Ward headed out on another 2-on-1 for the Caps and when Joe Corvo tried to defend Johansson, it was Johansson feeding the puck across to Ward for the one-timer and a 5-3 lead for the Caps.  Oddly enough it would be the only goal on which Nicklas Backstrom did not record an assist.  His four-assist game was the seventh time he turned the trick, the first time since getting four helpers in a 6-3 win over Tampa Bay on Veterans Day, 2010.

From there the Caps turned it over to Braden Holtby, who stopped all ten shots he faced in the third period, and the Caps had a 5-3 win plus a .500 record for the first time in the 2013 season.

This win would be the first in what became an eight-game winning streak for the Caps.  That would make it six consecutive seasons in which Washington enjoyed a winning streak of at least seven games.  Considering it took the Caps 20 games to accumulate a total of eight wins at the start of the season, they had come a long way.  For Carolina, it was another stop on their descent into oblivion.  They would go 3-10-2 for the month, wrapping up a ghastly second half of the season.  After having gone 15-9-1 in their first 25 games, the Hurricanes finished 4-16-3 in their last 23 contests, largely the result of a series of injuries to critical players.  What that meant for the Caps was that one rival was dropping out of the race for the Southeast Division title, leaving only Winnipeg ahead of them in the stretch run.  That was what made this game, one in which the Caps passed the Hurricanes for good and reached .500 in the process, a game that mattered in the 2013 season.

Photo: Chris Seward/News Observer
Posted by The Peerless at 5:41 PM No comments: