The Peerless Prognosticator is ON THE AIR!!! -- Eastern Conference Semifinals: Game 3/Rangers at Capitals, May 2

It is Game 3 in the Eastern Conference semi-finals and only the second time in team history the Caps have played a game on May 2nd (the Caps didn’t play their first game in the month of May until 1990). In the only playoff game the Caps have played on May 2nd, Alexander Semin had a point in his sixth straight playoff game (4-5-9) in the 2009 Eastern Conference semi-finals against Pittsburgh, getting a pair of assists in a 3-2 Game 1 win.

Troy Brouwer scored his first Stanley Cup playoff point in Game 2 of the 2009 Western Conference semi-finals against Vancouver (he had eight hits in the game, too).

Jason Chimera was born 33 years ago in Edmonton, AB.

The Caps won their last regular season game of the abbreviated 1994-1995 season, beating the Pittsburgh Penguins, 7-2, to finish the 48-game season with a 22-18-8 record. Peter Bondra and Ken Klee each had a pair of goals (so did Jaromir Jagr for the Penguins), and Olaf Kolzig stopped 36 of 38 shots for his second career win (he finished the season 2-8-2.

--Nine different Caps have points in the first two games of the series. Jason Chimera is the only one with two points, both of them goals.

--You might expect Alex Ovechkin to lead the team in shots. He does (eight). But Matt Hendricks second? That’s right, Hendricks’ five shots on goal is second on the club in this series.

-- Hendricks leads the club in hits (eight), which is not too surprising. But Carlson is second (seven).

-- Jason Chimera has two shots on goal in the series so far. He has two goals.

-- In Game 1 the Caps failed on four power play opportunities to score a goal…in Game 2 they were 1-for-3. 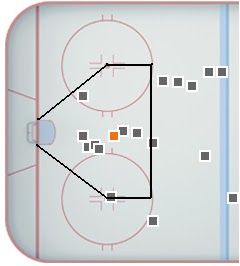 Chris Kreider is 1-1-2 in the two games of this series so far, and although he did not get a point in Game 2 he was a factor, getting a breakaway chance as a Ranger penalty expired. He has two goals in the playoffs so far, both of them game winners, including his goal in Game 1 of this series. If he has not been the Rangers’ best player so far, he is on a short list. Players such as Kreider being as large a factor as they are is not unlike the problem the Caps had in the opening round series against Boston – production from down the roster as a reflection of depth. Kreider presents a different kind of problem in that there isn’t the book on him that the Caps might have had on the veteran Boston forwards. They need to figure it out. If he is a factor in this series going forward, it spells trouble for the Caps.

Now that the Caps are returning home, the players have to resist (tells us if you’ve heard this before) the temptation to open things up and play “cute.” So far in the playoffs, Alexander Semin has been one of those players who, perhaps unexpectedly, has been less prone to that problem…to a point. He has two goals in three games at Verizon Center, but he also has been on the ice for three of the nine goals scored against. Semin illustrates a point in that the Caps need to bring the same 200-foot game they have been playing on the road to their own rink.

Look up above at the comparison of Game 1 to Game 2…do more of the Game 2 stuff (“Core Four” scoring, make the Rangers pay when they take penalties, get off to a good start…they usual stuff)

In the end, the team that wins this series is going to have a big advantage going forward. The margins for error are so small. All-time, NHL teams opening a seven-game series at home that take a 2-1 lead have a .758 winning percentage, and even teams opening a series on the road have a .604 winning percentage (whowins.com). The Caps should have learned enough of a lesson in the first round that merely being the home team counts for only so much, and as it turned out for most teams in the opening round, not much at all. Now it is time to put that home ice advantage they earned with the split in New York to good use.