After Ovechkin, the next leading Caps goal scorer is Mike Green -- a defenseman -- with 15. Alexander Semin is the next highest goal-scoring forward with 14. Having done this in only 39 games (a 29-goal pace for a full year), one might take comfort in the fact that at least Semin can provide some scoring balance.

This is a problem that could solve itself if Semin can maintain or improve upon his pace after such a sluggish start due to injury. And, getting Chris Clark back could provide a lift as well. Brooks Laich has had a career year in goal scoring (nine, and counting), but getting some more out of the lower half of the forward lines would really be helpful. The trio of Matt Pettinger, Boyd Gordon, and Clark, which one doofus thought could combine for 50 goals this year, has 12 among them.

Perversely, the Caps might be in the best position in the Southeast to get such a lift from in-house sources as we move to the last 24 games of the season, depending on what their intra-division rivals do.

Carolina already has moved their second leading goal scorer (Cory Stillman, with 21), although they still have Ray Whitney (21) providing some support. Atlanta might move Marian Hossa (his 25 goals is second on the Thrashers to Ilya Kovalchuk's 39) before the trading deadline. One wonders if Tampa Bay will move Vaclav Prospal and his 25 goals in response to some controversy over his commentary that might have been construed as opinion about his coach. Then there is the matter of whether Florida will or will not move Olli Jokinen, who actually leads his team in goal scoring.

At a time of year when GMs are evaluated by fans by the ferocity with which they consummate deals, the team that stands pat might win for the others losing.
Posted by The Peerless at 12:30 PM No comments:

...would you find a "Bobble-fists Night." In this instance, it is the Wilkes-Barre/Scranton Penguins honoring Dennis Bonvie on March 28th...

...Bonvie has accumulated 4,290 penalty minutes in his AHL career with eight teams. He also has 311 minutes in 92 NHL games. We're guessing there weren't a lot of those minutes logged for hooking.
Posted by The Peerless at 8:05 AM 1 comment: 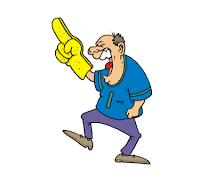 There are bad one-point games, and there are good one-point games. Last night’s 3-2 shootout loss to the Atlanta Thrashers qualifies as the latter as the Caps finally solved Thrasher goalie Kari Lehtonen for the tying goal in regulation with less than two minutes to play to earn the point.

It was a game that, for the Caps, involved a lot of unproductive energy. They pounded 41 shots at Lehtonen, but there were precious few of the rebound or follow up variety. It is probably instructive that the Caps’ first goal of the contest was scored when an Alex Ovechkin shot pinballed onto the stick of Viktor Kozlov, who had nothing but net to shoot at. For the rest of the game, Lehtonen was given the chance to see shots clearly and handle them cleanly.

Lehtonen also played Sidney Crosby for a moment, hitting Marian Hossa with a “long bomb” of a pass that Hossa took almost at the Caps’ blue line with less than a minute to go in the second period. Hossa scored what could be his last goal at home as a Thrasher (he is rumored to be on the trading block, and Atlanta does not return home until after the trading deadline) by skating in alone on goaltender Olaf Kolzig and sweeping the puck under Kolzig’s right pad.

clearly had the territorial advantage in the game, especially in the first and third periods. And despite puring shot after shot at Lehtonen, no more than the usual level of frustration seemed to grip the club. At least they were consistent in continuing to shoot the puck. The persistence paid off with 1:21 left in the third period when Alex Ovechkin skated in and ripped a shot between Lehtonen’s glove and body for his 48th goal of the season.

The result left the Southeast Division a muddle. Three teams sit atop the division with 60 points. And, the teams seem to have settled into a pattern of close-to-.500 play as the record over each of their last ten games suggests:

The game was remarkable in one respect. A team getting off 41 shots is a team that has the puck a lot of the time. But the Caps didn’t generally start plays with the puck. The Thrashers won 39 of 60 draws (65 percent). Only David Steckel finished with more wins than losses in the circle (7-for-13). The trio of Bobby Holik, Eric Perrin, and Todd White won 32 of 49 draws.

Nicklas Backstrom had a pair of assists to tie ’s Patrick Kane atop the rookie scoring list with 47 points apiece. While the rookie of the year race seems destined to come down to those two players, Tobias Enstrom continued to make a case for his efforts as well. The Thrasher defenseman led the club in ice time last night (26:32) and contributed an assist on the Eric Perrin goal that opened the scoring for the Thrashers. Enstrom is fourth among rookie scorers (35 points, 14 more than the next closest defenseman – ’ Matt Niskanen) and is plus-three for a team whose defense is often a bit lead-footed.

The game was decided by Bettman’s Gimmick when Eric Perrin scored on a move that Caps TV announcers Joe Beninati and Craig Laughlin described even before Perrin skated into the center circle to take the puck (skate in, fake backhand, pull puck across, lift forehand over goalie’s pad) and Slava Kozlov circled wide right, swooped in and snapped a shot past Kolzig’s right pad. For the Caps, Alexander Semin fired the puck wide to Lehtonen’s right, and Lehtonen closed the Caps out when he bobbled a shot by Boyd Gordon, but swiped the puck off the goal line to earn for the Thrashers the extra standings point.

Two points separates first and fourth in the division now, so each day promises a shakeup of the standings unless a team can put a streak together. Since the club “officially reached mediocrity” on January 19th, they’ve slowed their torrid pace under Bruce Boudreau. The 6-4-1 record is a bit off from the 15-7-4 pace set in the first 26 games under Boudreau, and it might be a reflection of the higher stakes for which games are being played and the continuing holes in the lineup left by the absences of Chris Clark and Brian Pothier.

The good way to look at this, perhaps, is that the Caps have something of a foothold on the top spot (they “lead” the division based on fewest games played among those tied with them at 60 points), and they have divisional games to come that present the opportunity to build on that.

Up next is the trip – the Panthers and Lightning – and a chance to open a bit of room between themselves and those teams, at least. When the Caps return home next Thursday to take on the Islanders, they could be solidly in first place…

…they could find themselves in fourth place, too.