The Peerless Prognosticator is ON THE AIR!!! -- Games 43 and 44: A Tale of Two Contests 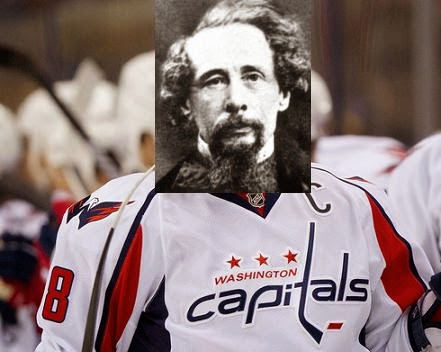 "Toronto, less favoured on the whole as to matters hockey than her sister of the red and blue, rolled with exceeding smoothness downhill, leaking goals and standing around against the Hurricanes. Under the guidance of her coach with the bad haircut, she entertained herself (if not her fans), besides, with such humane achievements as sentencing a youth – or maybe Dion Phaneuf – to have his hands cut off, his tongue torn out with pincers, and his body burned alive, because he had not kneeled down on the ice to block a shot during a dirty procession of goals scored by the Carolina Hurricanes, from a distance of some twenty or thirty feet.

"In Washington, there was scarcely an amount of order and protection to justify much national boasting. Daring burglaries by opponents, and highway robberies, took place in the capital itself every night…well, every other night, or whenever the Caps had a two-goal lead; fans were publicly cautioned not to go to the arena without consuming several draughts of ale for security.

"All these things, and a thousand like them, came to pass at the start of the dear old year two thousand and fourteen. Environed by them, while the stern jawed coach and the coach with the bad haircut worked unheeded, trod with stir enough, and carried their divine rights with a high hand. Thus did the year two thousand and fourteen conduct their Greatnesses, their teams, and myriads of small creatures – that would be you fans - along the roads that lay before them."

What lays before the Washington Capitals is a contest with the Toronto Maple Leafs, but before that, a few things about last night’s last-minute 4-3 win over the Tampa Bay Lightning in Florida.

-- There was much mention on last night’s broadcast of Philipp Grubauer taking hold of the number one goaltending job for the Capitals.  We are not sure that: a) it is true, or b) that if it is, that it is a good thing.  Grubauer’s quickness and flexibility was on display last night, often.  He kept the Caps in the game with several fine saves, a couple on shorthanded chances that were especially timely.  But once can see where teams have been looking at film on him, too.  The Lightning were persistently trying to exploit openings over his shoulders, perhaps trying to take advantage of a somewhat low profile in his stance or a lean in his upper body that keeps him from being more upright and filling more net.  Let’s not be too hasty in proclaiming a number one goaltender he who might be the flavor of the month.  We think this is still going to be Braden Holtby’s net before it’s over.

-- OK, it worked.  The line juggling that left Eric Fehr on a line with Mikhail Grabovski and Alex Ovechkin resulted in two goals for Fehr, his first such two-goal night since potting two last Valentine’s Day, coincidentally, against Tampa Bay.

-- Mike Green, who has had assist issues of his own to a lesser extent, had his first two-helper game since Opening Night against Chicago.  It was his second straight game with two points, the first time he’s pulled that off in-season since he did it three games in succession, February 10-13, 2010 against Montreal, Ottawa, and St. Louis.  He did it across two seasons, a three-point performance in last season’s finale against Boston before his two-point night against the Blackhawks on Opening Night this season.

-- If there was one gratifying thing to see last night it was this… tip-in (Grabovski), stuff (Johansson), tip-in (Fehr).  Those were the last three goals for the Caps, scored from an aggregate distance of less than 50 feet.  It takes a certain courage to get into and stand your ground in high traffic areas in front of the net, and the Caps did it last night.

-- The Backstrom-Brouwer-Laich line… call it a work in progress.  Four even strength shots for the night, and the two by Brouwer came from well outside.

-- If you look at the Fenwick chart from last night (from extraskater.com), it has a “glass-half-empty, glass-half-full” aspect to it. 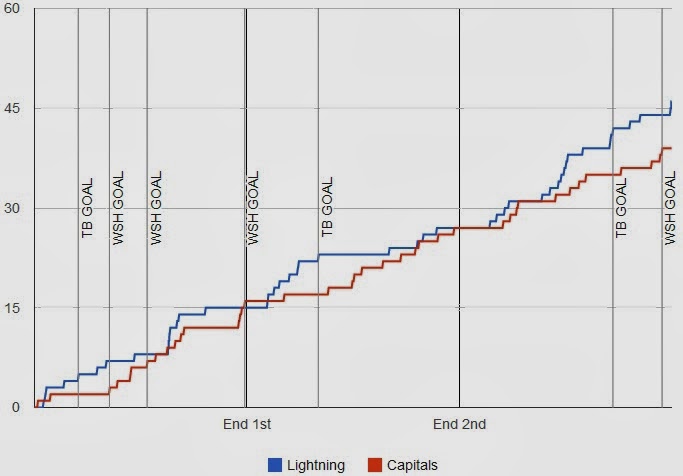 On the one hand, you can see those Tampa Bay flurries (in blue) creating space in the Fenwick functions just before each of their three goals.  On the other, you can see the Caps clamping down better immediately after those goals.

-- Odd stat… Mike Green led the team in 5-on-5 Corsi-for percentage last night (60.6 percent) .  However, he was on ice for two of the Lightning’s three five-on-five goals.

-- Strong defenders playing strong… John Carlson and Karl Alzner were at the bottom of the 5-on-5 Corsi-for statistics last night for the Caps.  However, neither was on ice for a goal against, the only Caps defensemen who could say that.

Now, on to tonight’s game against the Toronto Maple Leafs at Verizon Center…

--  Did the Leafs stink last night in their 6-1 loss to the Carolina Hurricanes, or what?  The Leafs were bad early (three goals against in the first period), bad late (two in the third period, a power play goal and a shortie), and insulted in-between (former Leaf John-Michael Liles scoring in the second period).

-- The save percentage for Leafs’ goalies Jonathan Bernier and James Reimer in those three games: .845.

-  In their three-game mini-losing streak the Leafs have allowed four goals in ten shorthanded situations, and they have allowed at least one power play goal in five of their last six games.

Let’s face, bad as the Caps have been over the last four weeks (4-4-4 in 12 games), the Leafs have been vomit-inducting bad since coming down from their Winter Classic high.  Toronto is a poor road team, they are vulnerable on their own penalty kill, are leaving their goalies hanging out to dry, and the death watch on the tenure of head coach Randy Carlyle might have begun.  If there is a team being served up for the guillotine, the Leafs are it.  The Caps just need to let the blade fall.