The Peerless Prognosticator is ON THE AIR!!! -- Game 70: Nashville Predators at Washington Capitals, March 16th

The Washington Capitals, fresh off breaking a four-game losing streak with a 4-2 win over the Minnesota Wild, get a crack at redemption of sorts on Thursday night when they host the Nashville Predators in the Preds’ only visit to Washington this season (unless, of course…). The Caps dropped a 5-2 decision in Nashville back on February 25th. The Caps will be looking to avenge that loss and win their second consecutive decision against Nashville on home ice (they beat the Predators, 4-1, last March 18th).

Nashville has struggled since that win over the Caps last month, going 4-2-2 since then, two of those wins coming in overtime, providing an interesting symmetry – two regulation wins, two extra time wins, two regulation losses, and two extra time losses. In those eight games, the Predators outscored their opponents by a 27-26 margin, an unsurprisingly narrow margin given that six of the eight games were one-goal contests. Interestingly enough, the other two decisions would have been one-goal decisions but for empty net goals, one scored by Chicago in a 5-3 Blackhawks win, the other by the Predators in a 3-1 win over the San Jose Sharks.

Eights run wild for the Predators in the eight games since they faced the Caps. Three skaters lead the team in points over that span, all of them with eight, although they have done it in different ways.

Filip Forsberg, who had a goal and two assists in the 5-2 win over the Caps on February 25th, is 5-3-8 in the eight games since, the five goals leading the club. He has slowed a bit though, with just two goals in his last six games after scoring one on Edmonton and then two against Buffalo. And, he has slowed down in the midst of a healthy volume of shots, scoring those two goals on 24 shots in those last six games. Look out if Forsberg scores a goal. Nashville has not lost a game in regulation in which he did so since December 29th in a 3-2 loss to Chicago. Forsberg has 21 goals in 15 games since then, and the Preds are 12-0-3 in those games. He is 5-4-9, plus-3, in five career games against the Caps.

Ryan Johansen has a bit more of the playmaking contribution to his eight-point total over the last eight games than a goal scoring contribution. Johansen, who has points in five of the last eight games, has three multi-point games in the group and brings a modest two-game goal-scoring streak into this contest. What he has not been is much of a shooter in terms of shot volumes. Only once in his last 15 games has he recorded more than two shots on goal, that coming when he scored the game-tying goal on four shots in Nashville’s 5-4 overtime win over the Winnipeg Jets on Monday. Johansen is 4-9-13, even, in 15 career games against the Caps.

Roman Josi arrived at his eight points over eight games in the most charitable way imaginable. He did it with eight assists. Josi’s output over his last eight games has lifted him into a tie for 13th in the league in assists among defensemen (31, with Florida’s Keith Yandle and Washington’s Matt Niskanen) and into 12th place in points among defensemen (42) despite playing in only 60 games, at least five fewer than any of the 11 defensemen ahead of him in points. Josi’s production is slightly off last year’s pace, when he finished with career highs in assists and points (14-47-61 overall), but he is still on a pace to finish near 0.20 goals per game (slightly ahead of last season, more than half an assist per game (slightly off last year’s pace) and morethan 0.70 points per game for a second straight season. Josi is 4-2-6, minus-1, in eight career games against Washington. 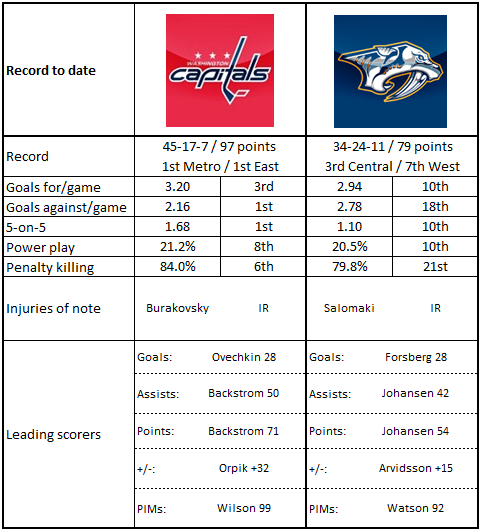 2.  Nashville is 7-for 24 (29.2 percent) on power plays in their last eight games, but three of those goals came against Edmonton, who they played immediately after facing the Caps. Since that game (in which they were 3-for-5) the Preds are 4-for-19 (21.1 percent). Nevertheless, the seven power play goals is exceeded by only three other teams in that span: Los Angeles (10), Tampa Bay, and Buffalo (seven apiece).

3.  How do you score seven power play goals and still end up with an “even” goal differential on special teams? A lousy penalty kill is how. The Predator penalty kill has been awful since shutting out the Caps on their only opportunity back in February, killing just 13 of 22 shorthanded situations (59.1 percent). The Preds did score two shorthanded goals, so that gets them back to even…barely.

4.  Speaking of those shorthanded goals, Nashville leads the league in that category this season with ten. Five at home and five on the road. The Preds are just 2-1-2 in games on the road this season when they scored shorthanded.

2.  In those 11 home games against the Preds, the Caps enjoy a whopping 342-287 edge in shots on goal and have outscored them overall, 33-26. Only three times in the 11 games did Nashville reach the 30-shot mark. The Caps did it six times, and their 48 shots in a 1-0 win on November 26, 1999 stands as the tenth highest shot total on home ice in the last 30 years of Caps hockey in Washington  and the most shots ever recorded on home ice with only one goal to show for it. It is also the most shots the Caps ever recorded in a win on any ice surface, home or away, in team history.

Washington: Nate Schmidt
Hard work is its own reward, but marry it to a result, and the reward is a bit more tangible.  When Nate Schmidt took the ice against the Anaheim Ducks last Sunday, it was his first action since in March, since he skated against the New York Rangers in a 4-1 win on February 28th.  When he scored the game’s first goal in the Caps;’ 4-2 win over Minnesota it was the kind of result that has been a long time coming and, frankly, infrequent.  Schmidt finished the game with his second goal of the season on a total of 55 shots, lifting his shooting percentage from 1.9 percent for the season to 3.6, which is still 434th among 503 skaters and 101st among 160 defensemen in shooting percentage (minimum: 50 shots).  But rewarded he appears to be, getting a sweater for this game, even as Kevin Shattenkirk (who has taken ice time Schmidt might otherwise have had) returns from his two-game suspension.  He has hardly been a liability when in the lineup, at least in terms of wins and losses.  The Caps are 25-7-4 in the last 36 games Schmidt saw action.  For himself, he is 2-8-10, plus-16, in those 36 games.  Schmidt is 1-0-1, plus-2, in four career games against the Predators.

Washington answered the call on Tuesday night after a bad road trip, a return trip across four time zones, a change to daylight savings time, and the noise from a storm coming through the area that disrupted routines across the region.  They had their nail-biting moments, but the Minnesota Wild is a talented team, too.  So are the Nashville Predators.  The Caps have the added incentive of seeking repayment for a sad 5-2 loss in Nashville last month.  With Kevin Shattenkirk returning to the lineup, Alex Ovechkin breaking a long goal drought, and the team finding both its offensive and defensive mojo, at least for that night against the Wild, perhaps the Caps are regaining their stride.  Couldn’t come at a better time.

Posted by The Peerless at 6:31 PM No comments: