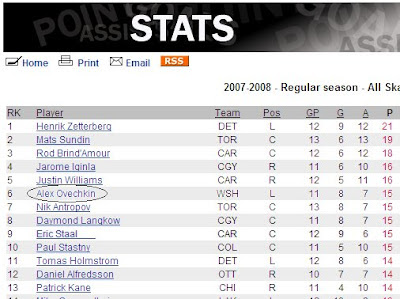 Posted by The Peerless at 12:35 PM No comments: 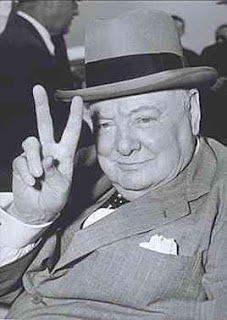 The problem with a team like the Caps is that they are not far enough along to have games like this a couple times a week or so, but the 7-1 win over Toronto in Air Canada Centre last night gives a tantalizing glimpse of what this team could be in a couple of months. It was as dominating a performance the Caps have had in any game since the lockout, marked by a collection of “firsts:”

…feel free to bring any others I might have missed to our attention.
You’d have to go a long way to find any negatives about this game (ok, Boyd Gordon and David Steckel both were on the low side of the faceoff wins statistic…if you want to be picky). But the Caps held the league’s number-two offense to one goal, which ties for Toronto’s low for the year, and they treated the Leafs’ defense like…well, number two.

The Caps got out to a lead on a nifty redirect from Boyd Gordon at 3:19 off a drive by Matt Bradley who, as if it needed saying, had his best game as a Cap. The Leafs got that goal right back 31 seconds later when Kolzig-killer Alexei Ponikarovsky netted the equalizer. That might have signaled trouble for the Caps, but they came back with a quickie of their own 96 seconds later when Pettinger got his first of the year.

From there, it was….well, let’s let the Toronto Sun tell it in a picture, rather than my thousand words… 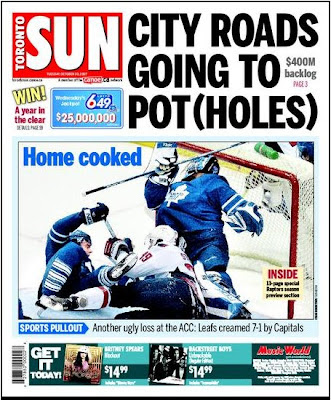 “…all the goodwill fostered by the Leafs with their back-to-back road victories against Sidney Crosby and the Pittsburgh Penguins, as well as Jaromir Jagr and the New York Rangers last week, was obliterated with another worthless performance at home.”

But this isn’t about the Leafs, it’s about a superb performance from the Caps. If you look up and down the scoresheet, there is a lot of ink…very few blank spaces. For example, there were only four skaters who did not register on the “plus” side of the ledger, and all of those players were even. Only three skaters did not have a shot on goal (oddly, all forwards – Brashear, Tomas Fleischmann, and Nicklas Backstrom – Backstrom was the only skater not to attempt a shot last night).

The nature of the game also permitted a lot more balance in ice time. Four Caps had more than 20 minutes on the ice, but none had more than 21 (although Ovechkin skated for exactly 5:00 in the third period). Another four had more than 19 minutes, and Nylander had 18:58. Only Sutherby and Fleischmann had less than 10 minutes.

The Caps had two more power play goals in five chances, and that makes them 5-for-17 in their last three games (29.4 percent). The Caps also have killed off their last 13 shorthanded situations.

It should not be lost in this that Olaf Kolzig turned away 32 of 33 shots, including 10-bell stops on a left-alone Mats Sundin and later a sprawling glove save on Bates Battaglia.

It was a fine night all around…now, about putting a few of these together…
Posted by The Peerless at 7:30 AM 7 comments: