The League Speaks, But What Did It Really Mean?

On Sunday the National Hockey League published a statement on its Web site that was a message to its fans. We have no doubt it was massaged within an inch of its life by its public relations flacks and lawyers in an effort to strike a sympathetic tone with fans. Because as we all know, it is only the fans that matter in this lockout. Right?

Yeah, right. Well, in a public service to our fellow fans, your old pal, Uncle Peerless, is going to translate this “Message to Our Fans” for what it really says to us. Shall we?...

Despite the expiration of the Collective Bargaining Agreement, the National Hockey League has been, and remains, committed to negotiating around the clock to reach a new CBA that is fair to the Players and to the 30 NHL teams.

The National Hockey League remains committed to imposing a solution on players that emasculates the players’ union (as if that can still be done after what we did in 2005) and guarantees profits to our 30 member teams regardless of how ineptly they are run or how much we have to prop up hockey in these cities that The Commish thought it would be a good idea to turn into hockey towns, even though the only ice you ever see in some of these places is in a Tom Collins.
*****

Thanks to the conditions fostered by seven seasons under the previous CBA, competitive balance has created arguably the most meaningful regular season in pro sports; a different team has won the Stanley Cup every year; fans and sponsors have agreed the game is at its best, and the League has generated remarkable growth and momentum.

Thanks to us steamrolling the union seven years ago, we saved owners from themselves, from leaving them able to treat their clubs like a fantasy hockey team and spend themselves into irrelevance.
*****

While our last CBA negotiation resulted in a seismic change in the League's economic system, and produced corresponding on-ice benefits, our current negotiation is focused on a fairer and more sustainable division of revenues with the Players -- as well as other necessary adjustments consistent with the objectives of the economic system we developed jointly with the NHL Players' Association seven years ago.

While our last CBA negotiation resulted in an agreement that exceeded our wildest dreams, giving us everything we wanted, well, we just want more.
*****

Those adjustments are attainable through sensible, focused negotiation -- not through rhetoric.

And if that means blowing up another season, well…things happen.
*****

This is a time of year for all attention to be focused on the ice, not on a meeting room.

This is a time of year for all attention to be focused on making sure we have fans’ correct credit card numbers and that we make sure their payments for season tickets are current.
*****

The League, the Clubs and the Players all have a stake in resolving our bargaining issues appropriately and getting the puck dropped as soon as possible.

The league isn’t going to rest until the players squeal, and it that means blowing up a whole season, well…like we said, things happen.
*****

We owe it to each other, to the game and, most of all, to the fans.

League to fans: “Fuck you!” 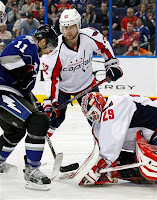 Theme: "For once you have tasted flight you will walk the earth with your eyes turned skywards, for there you have been and there you will long to return."
-- Leonardo da Vinci

In a three year period spanning the 2007-2008 through 2009-2010 seasons and 225 games, Mike Green established himself as the top offensive defenseman in the game. He recorded 68 goals and 137 assists in that time, 36 of those goals coming on the power play and 12 of them being game-winners. He was twice a Norris Trophy finalist and set a record for defensemen in 2008-2009 by scoring goals in eight consecutive games.

In the last two seasons, however, Green dressed for only a total of 81 games, going 11-20-31. Only three of those goals came at even strength, and only two of those goals were game-winners for the player who earned the nickname “Game-Over Green" with those 12 game-winners (four of them in overtime) in those three big-number seasons. Injuries – concussions, ankle, groin – severely limited his availability the last two seasons, and his ability to come back from them to be the elite-level defenseman he was for three seasons is among the Caps’ biggest question marks heading into this season.

What the Caps have not had from Green the last two seasons, and what they need from him this season, is more than the obvious contributions of total goals and assists from the blue line. In his three big seasons Green averaged 24:54 of ice time per game. Last season that would have been 12th in the league in ice time, and it is more than three minutes greater than the average ice time of any returning Capital from last season (John Carlson – 21:51).

Then there are the power play contributions. In his three big seasons Green averaged 12-20-32 per season on the power play. Last season Caps defensemen not named “Green” combined to go 8-22-30 on the power play. One cannot help but think that his absences were a large part of the difference between the Caps power play operating at 22.8 percent efficiency over those three seasons when Green was at the top of his game, and the 16.7 percent mark the Capitals posted on the power play last season.

Over the last two seasons the Caps are 45-23-13 with Green in the lineup (a 104-point pace) and 45-32-6 without having him in the lineup (a 95-point pace). And many of those games with Green in the lineup were ones in which Green was probably diminished somewhat by the injuries he sustained. With respect to the power play, having big contributions from the blue line is not necessarily a must-have for a champion, but the fact is that no Cup-winner has had a blue line without at least one ten-point producer on the power play since the 2004-2005 lockout. The Caps do not return a defenseman who had more than seven power play points last season (Dennis Wideman, now in Calgary, had 20). Green certainly has a history of being able to contribute at that level (perhaps adjusted for the drop in power play opportunities overall since the 2004-2005 lockout), and if the Caps are to be successful he is likely to have to.

Over the past two seasons Mike Green’s power play contributions dropped to having only eight goals in 81 games overall (he averaged 13 per 82 games in the three seasons before that). But more than that was his even-strength goals drying up. Three in those 81 games? Mike Green has not scored an even-strength goal in the regular season since December 28, 2010. That is 49 games he has played, and counting, in which he has not recorded an even-strength goal. And it is much the same in the playoffs. Green has a total of two career even-strength goals in 50 post-season games. It would be nice to see Green return to more normal (for him) production on the power play, but that really is not his problem.

Since dressing for all 82 games in the 2007-2008 season, Mike Green has been absent for almost one-third of the regular season games played by the Caps (104 of 328). What is worse, his availability is a matter of diminishing performance – 75 games in 2009-2010, 49 games in 2010-2011, and only 32 games last season. It is entirely possible that the concussions suffered in the 2010-2011 season are far enough in the past to be of lesser concern. It is not unreasonable to think that the surgery he had to repair an injured groin last season will leave him stronger going forward. Productivity, at least at the offensive end of the ice, has not been a problem for Green, even in the midst of his injuries. His 11-20-31 line over 81 games in the last two seasons wouldn’t keep him among the game’s elite scoring defensemen, but it would have left him among the top 40 defensemen in points last season, and the 11 goals would have left him in the top 15. Not bad for a guy who has had to battle injury and changes to a more defensive style employed by the Caps. But it is that pesky injury bug that Green has to shake.

Dennis Wideman took up much of the slack for Mike Green on offense last season. But his 11 goals and 46 points are in Calgary. It is possible that John Carlson will assume a bigger role on offense from the blue line (he was 9-23-32 last season). However, there are probably limits to that if he does not add significantly to the 21:51 in ice time he averaged last season (you will remember we projected Carlson at 10-26-36 for this season). Dmitry Orlov might pick up some of the slack as well. But having Green as a credible offensive threat from the blue line opens up the ice for an Alex Ovechkin or a Nicklas Backstrom, too.

There is the potential for there being more contributors and more varied contributions on offense from the blue line this season. The operative word there is “potential.” Mike Green has to return to a more familiar level of production if the Caps are to be successful this season.