“Consistency is the foundation of virtue.”
-- Francis Bacon

If consistency can be spectacular, Lars Eller is a spectacular player.  Consider his scoring lines over the last six seasons coming into the 2016-2017 season: 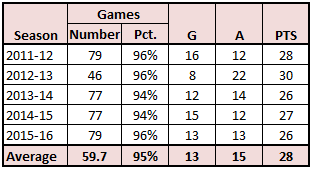 If Caps fans there thinking “WYSIWYG” with Eller ("what you see is what you get"), the first half of the season might have left those same fans asking “WTF?”  Eller had the best individual shot attempt share of any forward on the club appearing in more than a dozen games (57.81 percent; numbers from NHL.com).  Among those 13 forwards he had the seventh highest average ice time, just over 14 minutes per game.  But Eller was stuck at three goals and seven points, and his minus-1 rating was tied for worst in the group.  In those first 40 games, of which Eller appeared in 39, his game was a case of “efficiency” without “effectiveness,” at least as far as his offensive numbers were concerned.

Then…there was an empty net goal.  Game 41 against the Pittsburgh Penguins (Eller’s 40th of the season) was dominated by Alex Ovechkin reaching the 1,000 point mark for his career with a goal 35 seconds into the contest.  Later, the Caps took a 4-2 lead into the final minute of play, and one of the oddest goals you will ever see was authored by Eller…

Off a stick, off a helmet, and into an empty net.  And with that, Eller started off on a run over his next two ten-game splits in which he was 7-7-14, plus-16.  He tied for the league lead in plus-minus over that period.  In fact, it was a teammate with which he was tied (Brett Connolly), and the other member of that third line – Andre Burakovsky – was third over that period with a plus-13.  Eller and his cohorts combined for 20 goals over those 20 games (it might have been more, but Burakovsky missed five games in that period), almost a quarter of the 86 goals the Caps scored over those 20 games in posting a 15-3-2 record.  It was, arguably, Eller’s, his line’s, and the Caps’ best stretch of hockey of the season.

It was a brief moment in the sunshine for Eller, who spent his last two ten-game splits as he did his first four, with one notable exception.  As he did in those first four ten-game splits, he struggled to put up points, going 2-2-4, the fewest points among the 12 forwards playing in at least ten games in that finishing run.  But he also struggled in his possession numbers, his 50.71 shot attempt percentage last among that same group of 12 forwards.

Fearless’ Take… Secondary scoring matters.  Folks keep pounding on this point, but Eller’s numbers reflect that.  The Caps were 8-1-2 in games in which he had a goal, 17-2-3 in games in which he had a point.  Eller was another one of those Caps who performed consistently at home or on the road, going 6-5-11, plus-8, in 41 games at Verizon Center and 6-8-14, plus-7, in 40 games on the road.  He and T.J. Oshie were the only Capitals this season to record at least one even strength, power play, and shorthanded point.

Odd Eller Fact… 2016-2017 was the first season since his rookie year that he did not record a shootout attempt.  Coming into this season (and ending it), Eller was 6-for-17 (35.3 percent, tied for 88th among 242 players recording at least ten shots since 2010-2011) with three game-deciding goals in his career in the trick shot competition.

Sometimes, the statistics don’t matter.  That might have been the case for Lars Eller on a night back in February, a “Wednesday Night Rivalry” game against the Philadelphia Flyers broadcast nationally.  The Caps were wrapping up a three-game road trip on which they lost their first two games, in Detroit (in a Gimmick) and at Madison Square Garden against the Rangers.  For the Caps, it was a good night, their short losing streak coming to an end in a 4-1 win at Wells Fargo Center.  For Eller, it was a quiet night.  He was on the ice for a power play goal by Evgeny Kuznetsov, but otherwise he managed just two shots on goal and lost seven of 11 draws with no points in 14 minutes of ice time.  However, it was Eller’s 500th NHL game, and for the highest-drafted player ever born and trained in Denmark when he was taken 13th overall by the St. Louis Blues in 2007 (Mikkel Boedker was taken eighth-overall the following season), it was still a night to remember.

And sometimes the statistics don’t matter in an entirely different way.  When the Caps took to the road to head to Minnesota in late March, they were carrying with them a four-game winning streak.  Lars Eller was lugging a lot more baggage – a 12-game streak without a point.  Getting on the road seemed as if it might be just the tonic to break that streak.  Fortunately for the Caps, they broke out to an early lead, took it into the third period, then posted a goal to make it 4-2 with less than eight minutes left in the contest.  The Wild scored a pair of goals in the last five minutes to tie the game and threatened to snatch victory from the Caps’ hands.  However, T.J. Oshie scored less than two minutes into overtime to give the Caps the win.  For Eller, it was a thoroughly forgettable game.  He was on the ice for all four Wild goals, took a delay of game penalty, and skated just 10 even strength minutes without a point.  It was the sort of game to forget, put behind you, and move on to the next one (which, apparently, he did, since he scored a goal in Colorado in the next contest to break a 21-game streak without one).

Lars Eller scored a goal against the Ottawa Senators in Game 1 of Montreal’s playoff series against the Senators in 2015.  Since then, he went 12 straight games without a postseason goal coming into this postseason with the Caps.  Then, he went and more than doubled that unfortunate streak by going without a goal in the 13 games in which he played. It wasn’t for lack of trying; Eller did record 22 shots on goal in 13 games, a respectable total for a player getting 14 minutes a game.  And Eller did have excellent possession numbers in the postseason – 59.56 percent Corsi-for at 5-on-5, fourth-best on the team (numbers from Corsica.hockey).  But that pesky biscuit just wouldn’t go in the net, a malady that afflicted the bottom six forwards throughout the postseason.

Lars Eller completed his regular season with a scoring line of 12-13-25, almost identical to that five-year average with which he entered the season 13-15-28, and he appeared in 81 of 82 games, consistent with the durability he displayed over the previous five years.  In that sense, in the overall scheme of things, it was an “Eller-like” season.  Unfortunately, the same can be said for his postseason.  Except for a fine 2014 postseason with Montreal (5-8-13 in 17 games), he has not been an especially noteworthy performer in the spring (1-4-5 in 20 games in three other playoff years).  Going 0-5-5 for the Caps this spring did nothing to improve his grading for the season.  Like too many Caps, especially among the bottom six, he just didn’t demonstrate a mastery of the subject in the final exam.  If he could have extended his consistency into the postseason, he could have earned the virtue of a higher grade.