Anything you can do... 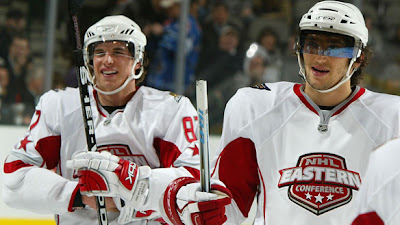 ...I can do better.
I can do anything
Better than you.

After four years, that seems to be the theme song in the ongoing “Ovie vs. Sid” battle. They’ve had four rounds so far, and things look just about as even as can be as the two trade their best shots… 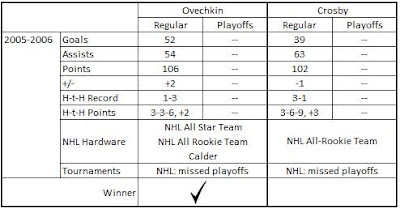 There wasn’t a lot of distance separating the two. Ovechkin narrowly won the scoring competition; Crosby won the head-to-head matchup. Crosby was getting busy busy setting a number of “youngest” records – youngest NHL player to record 100 points in a season, youngest to 100 points and 100 penalty minutes. Ovechkin was authoring signature moments – planting an opponent through the glass on his first shift in the NHL, scoring what is still (almost four years later) referred to as “The Goal.” In the end, though, Ovechkin was the landslide pick as the Calder Trophy winner, capturing 124 of 129 first-place votes. Ovechkin is the narrow, but clear winner of Round 1.

Sophomore slump? Hee-yeah…right. Sidney Crosby had multi-point games in six of his first ten contests and never looked back at the competition for the Ross Trophy as the NHL’s leading scorer. Ovechkin might have made a closer race of it, but scored “only” 13 goals in his last 30 games of the regular season. Crosby one-upped (actually, two-upped) Ovechkin in the hardware department and continued with that “youngest” thing – youngest player in NHL to 200 points, youngest with two consecutive 100-point seasons, youngest to win the Ross and Pearson awards, youngest to be named to the NHL First All Star Team. Crosby was the clear winner of Round 2. 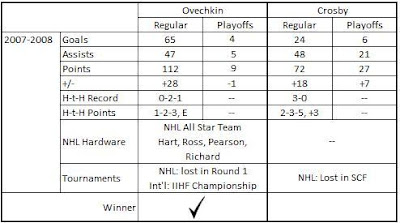 Ovechkin had a decent start to the season. Through the first 21 games, he was 14-9-23, even, which resembled his rookie season goal-scoring pace. But then, the Capitals changed coaches, and Ovechkin went nuts. In his last 61 games he was 51-38-89, +28. In his last 17 games, as he was leading the Caps in a furious 13-4-0 finish to secure a playoff spot, he was 17-12-29, +19. He had two four-goal games, his signature game being a four-goal, overtime-winner performance in a 5-4 win over Montreal when he had his nose broken and stitches needed in his lip. Crosby was limited to 53 games for the season because of a high-ankle sprain that kept him on the shelf for 28 games. The thing is, though, on an 82-game basis, Crosby finished the year on a 111-point pace (compared to Ovechkin’s 112 points), and a plus-28 pace (equal to Ovechkin’s end result). But Ovechkin’s 65 goals – the first time any player had scored as many since 1996 – was 25 percent more than the second place goal-scorer (Ilya Kovalchuk, 52), one of the most dominant seasons in the modern era of hockey. The only blot on Ovechkin’s side of the ledger was that pesky matter of head-to-head results with Crosby. The Penguins won all three contests in which both played, one in overtime. But Ovechkin’s winning the Crosby trifecta of the previous year, and adding the Richard to it, plus being named a first team NHL All Star for the third consecutive year made Ovechkin the clear winner in this round.

Ovechkin started slowly – two goals in his first 11 games, including a nine-game goal drought. It was a time when Ovechkin was no doubt distracted by the illness of his grandfather. Ovechkin left the club in the midst of that nine-game goalless streak to return to Russia and missed only the second and third games of his career. Crosby wasn’t exactly lighting things up early, either, at least by his standards. He started the year 2-13-15 in 14 games. Both players lifted their play, though. In his last 68 games following his 2-6-8 start in his first 11 games, Ovechkin finished 54-48-102, his 54 goals being on a pace to score, yes – 65 – over a season’s worth of 82 games. Meanwhile, Crosby finished 31-57-88 in his last 63 games, a pace for 115 points over an 82 games season. Neither could catch Pittsburgh’s Evgeni Malkin, though, for the Ross Trophy as leading scorer. Ovechkin did, however, win a second Richard Trophy as top goal scorer.

All that was prelude, though, to their playoff production. Ovechkin would finish the Stanley Cup playoffs as the fifth leading overall scorer, even though the four players ahead of him played in at least nine more games than did Ovechkin. Crosby – one of those players finishing ahead of Ovechkin – would finish the Stanley Cup playoffs as the leading goal scorer. The two would meet for the first time in the playoffs in the second round, and they put on quite a show in Game 2. Ovechkin would score the go-ahead and the ultimate game-winning goal on his way to a hat-trick, while Crosby opened the scoring in the game and scored all three Penguin goals, getting his own hat trick in a 4-3 Capitals win. Ovechkin and Crosby played more or less to a standoff, but Evgeni Malkin came alive late in the series, and the Penguins won in seven games. It was just the springboard the Penguins needed to propel them to the Stanley Cup. In the end, Ovechkin won the trophies (a Hart and Pearson to go with his Richard), but Crosby won the Cup. Winning the big prize certainly counts for something. Crosby gets the nod in Round 4.

These two have been the leads in a four-act production of “Can You Top This?” Each has used the other’s accomplishments as the next bar to clear, and with apologies to Evgeni Malkin, they stand alone as the top two players in the league. The question for Act V is, “Can Ovechkin trade places with Crosby once more and take his turn around the ice, the Stanley Cup in one arm, the Conn Smythe in the other?”

No, we're not going to jump into a tell-all about former Caps coach Glen Hanlon's taste in shaving inplements. It's one of those catchy "laws" that get stuffed into compilations of Murphy's Laws. What Hanlon's Razor states is:

"Never attribute to malice that which can be adequately explained by stupidity."

And that brings us to... Eklund. Caps fans have no doubt indulged in the click that dare not speak its name and seen him predict (in the same manner Jeane Dixon or Kreskin might "predict") that every hockey player whose name ended in "ov" would find their way to the Capitals (it's a Russian thing). Well, he's outdone himself this time.

In today's entry, The Bard of Bovine Excrement opines that the Caps are in the mix for no fewer than four of the remaining free agents:

Does this boob even click on his own page? Is he clueless as to his own "Cap Central" tab (actually something worth clicking on)? Can he not see that the Caps are hard and fast against the salary cap? In a fit of message board logic, we suppose, here is (one supposes) how this works...

George McPhee trades Michael Nylander to the New York Rangers (we'll assume Nylander would want to play there) for tickets to "Superior Donuts" at the Music Box Theatre this fall. There goes $4,875,000 in cap hit.

Then, McPhee trades Jose Theodore to Boston for tickets to the Winter Classic in January (shoot, there ought to be one Cap there). $4,500,000 in cap hit just went -poof-.

Now... just a million for Skoula, a couple mil for Shanahan (hey, he's a hall of famer in waiting), and a million each for the "ov's"...

Hey, it could work!

But hey, I clicked on it.

* Thanks to The Official for a push to this breaking news.

Posted by The Peerless at 2:48 PM No comments: