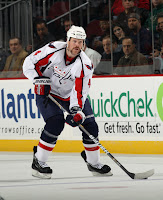 John Erskine
Theme: “A short absence is the safest.”
-- Ovid

(click pic for larger image)
In 2010-2011 John Erskine set a career record in games played with 73. He had career highs in goals (four), assists (seven), points (11), and even had a game-winning goal on his season resume. Among Caps defensemen playing in at least 70 games he had the lowest number of goals scored/on ice by far (41, to Jeff Schultz’ 60 in 72 games). He led Caps defensemen in hits by a wide margin and even managed to average more than a minute of penalty killing time per game (1:18).

In other words, a tidy sort of year for a guy who is generally pigeon-holed into the “physical defenseman” category.

You might have thought that such a season would be a nice springboard to 2011-2012. Well, it is a nice thought. It just did not turn out that way. It didn’t help that he had shoulder surgery in May and was not ready to go by opening night of the 2011-2012 season. He missed the first nine games of the season as a result. He played in eight of the next nine games trying to catch up from a largely wasted training camp, then missed four more games with shoulder trouble. The last of those games was the infamous 5-1 pasting laid on the Caps by the Buffalo Sabres and their bevy of AHL call-ups due to injury, a game that would be the last of Bruce Boudreau’s tenure as coach of the Capitals.

So, what Dale Hunter inherited in John Erskine was a hard-working guy with damaged goods, a defenseman able to dress for only eight of the Caps first 22 games (0-1-1, plus-2 at the time). And he probably did not endear himself to his new coach when in Hunter’s first four games behind the Caps’ bench, Erskine was on the ice for three goals, all of them game-winners in one-goal losses.

And the nightmare was hardly over.

It was during this period, immediately after Hunter stepped behind the Capitals’ bench, that Erskine enjoyed his most sustained stretch of playing time. Over the first 18 games of Hunter’s tenure Erskine was in the lineup for 15 of them (0-0-0, minus-2). The last of those 18 games was a bit curious. In a 5-2 loss to the Los Angeles Kings at Staples Center on January 9th, five of the six Capitals defensemen were on ice for at least one goal. The one who was not? John Erskine. Of course, having played only 10:25 in that game (by far the least of any Caps defenseman) undoubtedly played a role.

And perhaps that was it, not wanting to skate even a sixth defenseman so few minutes (he had been averaging about ten minutes of ice time in his last 12 games, including that game in Los Angeles). Erskine appeared in only five of the next 15 games and would not appear in any of the last 27 games of the regular season (he did have a lower body injury that kept him from appearing in the last six games, but by then it appeared he was glue-gunned to the press-box seating). When all was said and done, Erskine appeared in only 28 games. It was the fewest number of games Erskine played in since the 2002-2003 season (16 games).  Here is how this season compared to last: 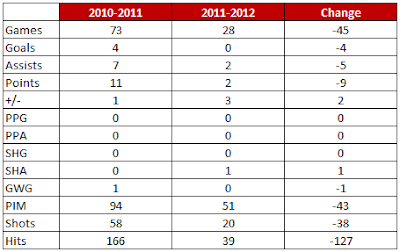 PDO – that measure of shooting percentage plus save percentage while on ice while at 5-on-5… among Capitals defensemen playing in at least 20 games this season, John Erskine had the highest value (1025). Now be assured, he also faced the weakest competition by a healthy margin among that same group of defensemen (numbers from behindthenet.ca). Goalies had a .945 save percentage when he was on the ice, no doubt also a product in part of that quality of competition, but also because in this group of Capitals defensemen he had the most frequent offensive zone starts (54.9 percent).

And only John Carlson and Karl Alzner had more frequent defensive zone finishes (they being the Capitals’ principal defensive shutdown pair, this is not unexpected). The moral here is that even with advantageous offensive zone starts, there weren’t many finishes there for Erskine. Where Carlson and Alzner had zonie start-finish differentials in positive territory (finish over start frequency), Erskine had the worst differential among defensemen playing in at least 20 games for the Caps.

Erskine was not as challenged in the defensive zone as many folks might have assumed, but he had certain advantages in where he started play on the ice, and in protections in terms of time on ice and quality of competition faced.

Odd Erskine Fact… Erskine had only one “minus” game in the last 16 contests in which he participated. The Caps were 8-5-3 in those games.

Game to Remember… November 11, 2011. Deuces were wild in this game, at least for Erskine. Two penalty minutes, plus-2, two shots on goal. He also assisted on the game-winning goal (a short-handed goal by Jason Chimera) in a 3-1 win over the New Jersey Devils.

Game to Forget… December 5, 2011. By the time Erskine had completed four shifts in a game against the Florida Panthers in Sunrise, Florida, the Panthers had a 2-0 lead. Erskine was not on ice for either of those goals, but when you are that “physical” defenseman, sometimes the situation calls for being “physical.” And at the 10:22 mark of the first period, that is what he did, picking a fight with Bracken Kearns, who happened to be playing in his first NHL game and thought he might open some eyes when he stepped up on Jeff Halpern when the latter had his head down trying to control the puck at the side wall. The fight itself was no contest – Erskine made short work of Kearns. But Erskine was given the gate for his effort – two minutes for instigating, five for fighting, and a misconduct. The effort did not have the intended effect. Florida scored the next goal. And as if to rub salt in the wound, the Panthers scored again on Erskine’s first shift after paying his penance. It put the Panthers ahead 5-1, just enough scoring to withstand a Caps rally that fell short in a 5-4 Caps loss.

Post Season… Although he did not appear in the last 27 games of the regular season, Erskine did make four appearances among the Caps’ 14 games of the playoffs, three of them in the opening round series against the Bruins. The Caps were 2-1 in those three games in which Erskine appeared. They might have given reason to believe that he could contribute against the Rangers in the second round, and in fact the Rangers did not score any of their three goals with Erskine on the ice in what would be a 3-1 Ranger win in Game 1. But it would be his last appearance of the season.

In the end… John Erskine simply could not establish any momentum this season after having a pretty solid 2010-2011 season. He started behind the eight ball in training camp, still recuperating from shoulder surgery.  He was behind the curve having missed out on contact for training camp and missing the first couple of weeks of the season.  Then events out of his control overtook him – the team’s face plant after winning its first seven games, the change in coaches, the seemingly months-long effort to try to find a combination that could string together some wins. He was lost in that mix and ended up enduring a season that he really did not deserve to endure.