The Peerless Prognosticator is ON THE AIR!!! -- Game 79: Capitals at Lightning, March 30th

Fresh off a win over the Carolina Hurricanes on the first game of a three-game road trip, their last trip of the regular season, the Washington Capitals head to Florida to take on the Tampa Bay Lightning Saturday night in the last game of their regular season series.

The Caps, who swept a home-and-home set against the Hurricanes, go to Tampa with a 14-4-1 record over their last 19 games and a current three-game winning streak.  Tampa Bay will be wrapping up the home portion of their schedule with this game.  The Lightning are the only team in the league to have reached 30 wins at home this season, going 32-6-2.  A win in their home finale would tie the Lightning for third-most home wins in a season in NHL history and would be the most by any team since the Detroit Red Wings won 36 home games in 1995-1996.

Since February 1st, the Lightning are 12-1-2 on home ice.  In that span, Nikita Kucherov leads the club in goals (eight), assists (14), and points (22) on home ice.  Not that he has been especially dependent on home cooking this season.  Overall, Kucherov is tied for the league lead in points on home ice (61, with Brad Marchand and Connor McDavid), and he leads the league outright in points on the road (60, seven ahead of Chicago’s Patrick Kane and McDavid).  He has set a blistering pace on home ice of late.  In his last 12 contests at Amalie Arena, he is 8-13-21, including two four-point games and seven multi-point games.  He is, perhaps, an extreme exception, but he does serve as evidence that it is not only in the first round that elite players are found.  He was taken in the third round, 58th overall, in the 2011 entry draft, right between Tyler Wotherspoon (by Calgary) and Rasmus Bengtsson (by Florida). Neither of those players have yet recorded an NHL goal, and Bengtsson has yet to dress for a game in the NHL.  Kucherov leads his draft class in career goals (185), assists (270), and points (455); and he is second overall in plus-minus (plus-99) to fellow Lightning draftmate Ondrej Palat (plus-106), himself taken with the 208th overall pick in that draft.  Kucherov is 10-7-17, plus-3, in 16 career games against Washington.

As if Tampa Bay is not deep enough in veteran skill, they have one of the top rookie producers in the league as well, Anthony Cirelli. He is a top-five producer in goals (18) and points (37, tied with Ottawa’s Colin White) in this year’s rookie class.  Cirelli was another third round draft pick, taken 72nd overall by the Lightning in the 2015 entry draft, between Jean-Christophe Beaudin by Colorado and Vili Saarijarvi by Detroit, neither of whom have yet to appear in an NHL game.  Cirelli got off to a slow start at the top of the season, going 2-2-4, minus-2, in his first 16 games, while averaging under 14 minutes per game.  Since then, however, he is 16-17-33, plus-26, in 61 games while averaging over 15 minutes per game.  He goes into this game on a six-game points streak (4-3-7, plus-2), and he has gone consecutive games without a point only once over his last 23 contests (9-9-18, plus-14).  Cirelli is 1-1-2, even, in two career games against the Caps.

Victor Hedman gets the Norris Trophy attention, Ryan McDonagh is the veteran influence brought in to provide depth and stability on the blue line.  The future, though, might belong to Mikhail Sergachev among the Lightning defensemen.  Not yet 21 years old and in his third NHL season, the former ninth-overall draft pick (in 2016, by Montreal) is third in goals, assists, and points among defensemen on the club (5-22-27).  He is running behind last year’s pace in each category (9-31-40 in 79 games), but he is already on the brink of jumping into the top-ten in scoring among defensemen in franchise history.  His next point will tie Filip Kuba at 68 points for tenth place.  Sergachev’s 14 career goals with the Lightning is already tied for tenth place in team history with Matt Carle.  He broke out of a six-game streak without a point when he recorded a pair of assists in a 5-4 win over the Boston Bruins on Monday.  In five career games against the Caps, Sergachev has yet to record a point and has an “even” plus-minus rating. 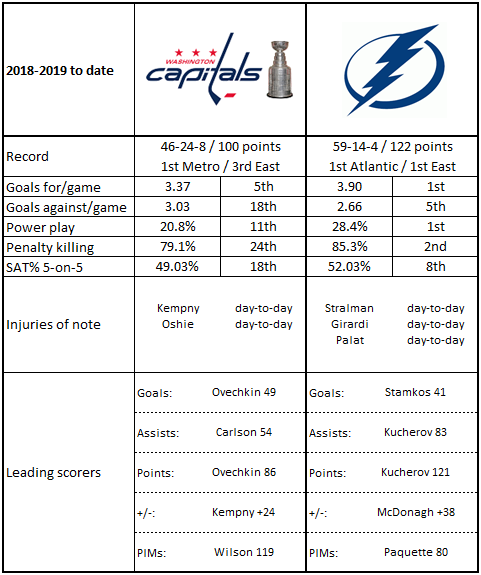 1.  Nikita Kucherov has not won a faceoff this season.  OK, he has taken only three draws.

5.  Tampa Bay has dressed only 24 skaters all season, their fewest since the dark 2004-2005 season.  No team in the league has dressed fewer skaters this season (Toronto: 25).

1.  Alex Ovechkin has gone two straight road games without a goal.  He does not have a streak of three games without one this season.

2.  John Carlson is third among defensemen in points on the road this season (33), trailing only Brent Burns (45) and Morgan Rielly (35).

If Steven Stamkos records three goals over his last five regular season games, he will finish with 44 goals, which would be his highest total since he recorded 60 goals in the 2011-2012 season.   While he has not threatened the 50-goal mark over the past seven seasons, he has been among the most consistent goal scorers in the league.  He is one of ten players over that span with at least 200 goals (he has 210/ninth in that group).  That total would be much higher had he not missed 65 games of the 2016-2017 season to a knee injury.  The 41 goals he has this season is a considerable improvement on the 27 he had in 78 games last year, only the second time in his 10 seasons to that point in which he recorded fewer than 30 goals while dressing for more than 70 games.  This year, that goal scoring has been a reliable indicator of team success.  Stamkos’ goal scoring might get a bit lost in the noise of the big season Nikita Kucherov is putting up in points, but the Lightning are 29-2-1 in the 32 games in which he has goals, and they unbeaten at home when he scored at least one goal (15-0-0).  Stamkos will go into this game on a five-game goal streak, six goals in all.  He is 16-17-33, minus-16, in 40 career games against the Caps.

Since Michal Kempny went out with a lower-body injury on March 20th, Christian Djoos has once more been a regular fixture on the Capitals blue line.  He has not wowed with offensive numbers in five games since he returned to the lineup (0-2-2), but he is a plus-1 and has contributed almost 16 minutes of ice time per game, over which the Caps are 4-1-0.  Of note for this game, while he went just 0-2-2 in his first 18 road games this season, Djoos has an assist in each of his last three road games.  He has only one goal this season, but his eight assists have kept him at the 0.22 points per game pace he had last season as a rookie when he went 3-11-14 in 63 games.  And, he has made quite a comeback after suffering a compartment syndrome injury to his leg that caused him to miss 24 games.  Despite his relative inexperience and intermittent play this season, he has not been a liability for the club, the Caps going 24-13-4 in the 41 games for which he has dressed (22-11-4 in the games in which he was absent).  Djoos has one career appearance against Tampa Bay without a point and has a minus-1 rating.

The Capitals have never finished a season series against the Lightning without winning at least one game.  In fact, last season was the first time they won only one game against Tampa Bay in a season series (1-1-1) since they went 1-0 with a tie in two games in the Lightning’s inaugural season in 1992-1993.  This is, however, the best Lighting team that the Caps have faced in 26 seasons.  Getting that first win would be – will be – an achievement.