The Peerless Prognosticator is ON THE AIR -- Game 42: Lightning at Capitals, April 13th

The Lightning come into this game having not made much progress in the standings – in either direction – over the past week.  They split two games, a win against Ottawa and a loss to Pittsburgh, both at home.  This game begins a four-game road trip for the Lightning that, unless they sweep all four games, will not likely have much impact on their playoff fortunes.  Tampa Bay starts the trip eight points out of eighth place with eight games to play.

We hit the high points about the Lightning in last Sunday’s prognosto, and little has changed for the visitors…

“Tampa Bay comes to Washington stuck in a place they might not have thought they would be after a 6-1-0 start to the season in which they outscored opponents by a 37-18 margin.  Since then, the Lightning are 10-18-2, and they have won consecutive games in regulation time only once…”

… that record is now 11-20-2, and they are still searching for those consecutive wins.

“The Lightning are 1-4-0 over their last five road games, and their lone win came against the slumping Carolina Hurricanes…”

…that record is now 1-5-0, and yes, that lone win was against Carolina.

“What is unsurprising over those first four games of the [new head coach Jon] Cooper era is that Steven Stamkos and Martin St. Louis lead the Bolts in scoring.  Stamkos is 2-4-6, and St. Louis is 1-3-4 over those four contests…”

“But there are a couple of surprises in there, too.  One is that Alex Killorn has a pair of goals and a pair of assists to tie St. Louis in scoring over these four games.  Killorn has put together a respectable rookie season with the Lightning, going 6-10-16, plus-1, in 27 games with Tampa Bay after going 16-22-38, plus-6, in 44 games with Syracuse in the AHL…”

…Killorn had a goal against the Caps last Sunday and an assist in the loss to Pittsburgh, making him 7-11-18 in 30 games.  He is ninth in total points among rookies despite having played in at least five fewer games than the player ahead of him with the fewest appearances.

“The other surprise is not a pleasant one for Lightning fans.  After missing nine games with a broken foot, Vincent Lecavalier returned to the lineup on April 4th against Carolina.  He has but a single assist in the two games played since his return.  What is more, Lecavalier has only one goal in the last 13 games in which he appeared…”

…Lecavalier has a good week. He had a goal and an assist against both the Caps and the Senators before being held off the score sheet against Pittsburgh.  It allowed him to lift his season scoring line to 9-18-27 in 31 games.  That is appoints-per-game rate better than any season for Lecavalier since the 2007-2008 season when he finished with 92 points in 81 games.

Here is how the numbers for both teams compare… 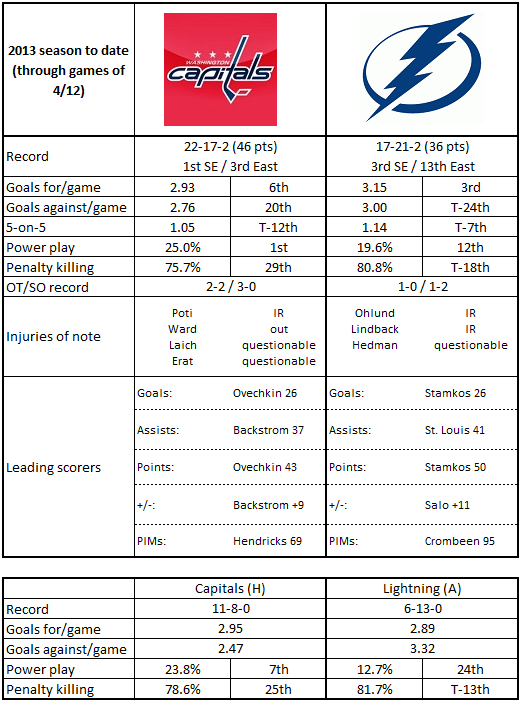 1.  Stamkos and St. Louis are quite prolific at the offensive end…and quite leaky in the defensive end.  The rank third and seventh among forwards in goal scored against on ice.  Here is what is worse.  Neither kill penalties (they combine for 1:08 of PK ice time per game).  Stamkos has been on ice for 45 even strength goals against in 40 games, St. Louis for 41 even strength goals against.

2.  Tampa Bay certainly suffers from a lack of depth on defense.  Although plus-minus is often derided as a valuable metric, sometimes looking at how those values differ among teammates can shed light on a problem.  Sami Salo (plus-11) and Victor Hedman (plus-8) are the only Lightning defensemen having played in more than 15 games in plus territory.

3.  Back to Stamkos… he has more than twice as many even strength goals (17) as the next highest total for the Lightning (Tom Pyatt with eight).

4.  And again… Stamkos has those 26 goals to tie for the league lead, but only eight of them have been scored against Southeast Division teams.

5.  Only two teams – Florida and New Jersey (three apiece) – have fewer wins when giving up the first goal of games (four).

1.  Despite being held off the score sheet in Thursday’s game against Carolina, Alex Ovechkin remains on a tear.  His 16-6-22 scoring line over the last 14 games is a 94-35-129 scoring rate over 82 games.  This is probably unsustainable.

5.  You remember those days when defenseman Mike Green scored 50 goals over two seasons and was a Norris Trophy finalist (despite not being able to, well, play defense…according to all the smart people in hockey)?  Well, his nine goals in 28 games is a 26-goal pace over 82 games, right in the ball park with his career best 31 goals in 68 games in 2008-2009.

Benoit Pouliot is a bit of an odd duck with respect to this game.  He is tied for second on the Lightning in goals scored against teams in the Southeast Division.  He has, by far, the best intra-division plus-minus (plus-14).  In his last three games ending with last Sunday’s loss to Washington he was 1-2-3 in three games.  But he has been scratched the last two games for Tampa Bay – a healthy scratch.  He might be a victim of the coaching change in that Jon Cooper wants to get a look at some youngsters in the NHL setting.  And although Pouliot has had success against the Southeast this season, he is only 1-1-2 in 13 career games against the Caps (scoreless in one game this season).

With all the attention being paid to Alex Ovechkin, Nicklas Backstrom, and Mike Green on the scoring front, it might escape notice that Eric Fehr is 1-0-1 over his last 15 games.  He has, to say the least, been streaky all year.  He opened the 2013 season without a point in his first eight games, then went 6-6-12 over his next 11 games before this 15 game drought.  His lone point in the last 15 games came on a goal against Montreal on Tuesday, so perhaps he is emerging from this streak and starting another.  He is 7-1-8 in 24 career games against Tampa Bay (scoreless in one game this season).

Tampa Bay is in that twilight part of their season.  Close enough to eighth place that a sustained winning streak could lift them into playoff contention, yet far enough behind the pack where the temptation is there to give more youngsters more time and responsibility to see what they can do.  This being a divisional game, though, one suspects the Lightning – from the coach down to the trainer – would like nothing better than to stick a needle in the Caps’ playoff balloon.  This is no “take it for granted” game.

Posted by The Peerless at 8:04 AM No comments: