Mike Knuble
Theme: “Dictionary is the only place that success comes before work.”
-- Vince Lombardi

Mike Knuble was a fourth round draft pick of the Detroit Red Wings in 1991, selected just before he embarked on a hockey career with the University of Michigan Wolverines. He spent four years in Ann Arbor, scoring 103 goals in 157 games. He then went on to serve his apprenticeship with the Adirondack Red Wings, recording 51 goals in 154 games (regular season and playoffs). It was during that second full season in Adirondack that he finally got his first cup o’ coffee in the NHL, getting nine games worth of a look at age 24. It wasn’t until the next season, at age 25, that he became a semi-regular in an NHL lineup, getting 53 games of regular season work and three more in the playoffs in what would be the Wings second consecutive run to a Stanley Cup.

The point is Mike Knuble spent a fair number of years as a comparatively unheralded draft pick working hard and climbing the ladder to what would become for him a solid NHL career. He is no stranger to hard work, and it is that ethic – and the style with which he applies it – that made him an attractive free agent to the Capitals last summer.

As you can see from Knuble’s progress in ten-game segments, success was not swiftly coming this past season, and it involved a few detours along the way… 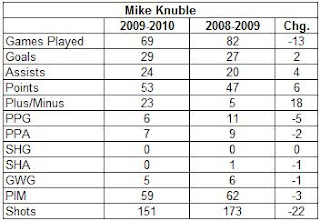 He had five goals and ten assists in his first 18 games – a more than respectable scoring pace – and was on a three-game scoring streak (2-4-6) when he took the ice against Minnesota on November 13th. Then, in the first period of that game, Knuble crashed the net on a power play in the first period – something he’s done a lot of over the years. This time, though, he landed awkwardly in the net, breaking a finger in the process. He would undergo surgery and miss 12 games over the next four weeks.

Coming back in mid-December, he was slow to get his rhythm, going 2-2-4 in his first 11 games after returning to the lineup. But over the last 40 games of the season (in which he played in 39), Knuble recorded 22 goals, five of them power play goals and three of them game-winners. What the Caps were looking for in Knuble came out clearly in the last half of the regular season after injury and a slow start after his return. But in those last 40 games Knuble was the role model for any hockey player whose ticket to success in the NHL is hard work and finding gold in rocky places.

Knuble had an especially noteworthy record against the Penguins – 4-2-6, plus-6 in four games, a power play goal, a power play assist, a game-winning goal, and 19 penalty minutes, that last number coming in largely as a product of 17 minutes earned in a 5-4 overtime win at Verizon Center on February 7th. Knuble took an instigator, a fighting major, and a ten-minute misconduct in jumping Craig Adams after Adams sent Alex Ovechkin into the boards shoulder first. Knuble had the last laugh, though. He scored the game-winning goal in overtime.

One would be hard-pressed to find a position at which the Caps realized more of an upgrade than at right wing on the top line. Consider this comparison of Knuble and last year’s incumbent at the position, Viktor Kozlov… 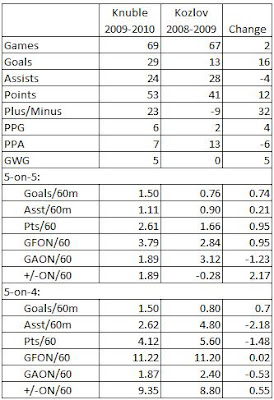 What’s more, as we noted above, Knuble scored 22 goals in the last 39 games he played in the regular season. Last season, Kozlov notched a total of six goals in his last 39 games, only two in his last 22 games.

In the playoffs, Knuble did not have an especially bad series against the Canadiens, but he did not finish nearly as much on a hot streak as he did to finish the regular season. At first blush, a 2-4-6, plus-2 line could be considered productive. But there were the facts that he scored both goals in Game 4 – a 6-3 Capitals win that would be the Caps’ last win of the series, and that he recorded only one assist over the last three games while going minus-3 and registering only seven shots on goal. It was part of the larger disappointment of the top line getting only one goal among them in the last three games of the series, all Caps losses.

Knuble was just what the doctor ordered in his ability to get goals from tight places. And his strong finish gave every indication that the spring would be even more productive. But like the rest of the Caps, it seemed, Knuble could never get the right bounce, find the right spot, or otherwise find a way to solve Jaroslav Halak in the Montreal series. In that respect he was hardly unique. But it was a sour ending to what had become for him a sweet season, one of the best in his career. It just means there is some more hard work ahead before the Caps – and Knuble – can realize the success they are aiming for.