The Peerless Prognosticator is ON THE AIR!!! -- Caps at Flyers, January 18th

The Washington Capitals take it on the road against the Philadelphia Flyers, their first of a three-game road trip and what will be five of seven away from Verizon Center over the next 17 days. This week’s three-game road trip will take the Capitals to Philadelphia tonight, followed by Long Island and Toronto before returning home to face the New York Rangers next Monday.

Road trips can be bonding experiences, whether for a group of 23 players on a hockey team or a family stuffing the luggage in the car and taking the road in the real sense of the term. And no one knows road trips like Clark W. Griswold, Jr. Clark and his lovely wife Ellen, and their children – Rusty and Audrey – are real veterans of the All American road trip. We sat down with Clark to get his take on what it takes for a successful road trip.

Clark Griswold: Pleased to be here.

TPP: Clark, I guess the first thing one has to be concerned with is planning. What should the novice road tripper be thinking about in planning a road trip?

CG: Well, there is the means of travel, Peerless. You have to have a reliable chariot to get you where you’re going. Now you could take an airplane and fly over this great big beautiful land of ours, but to get from sea to shining sea, nothing beats the Wagon King Family Truckster. You could drive that thing across the desert – you don’t even need the road – and get where you’re going. If that doesn’t work for you, a great road trip car is the Lincoln Continental with the suicide doors, although that's more for the college or fraternity crowd.

TPP: And once you’re on the road, Clark, what about keeping everyone from getting bored? What’s your secret to passing the time on the pavement?

CG: It’s a matter of keeping that sense of anticipation. Nothing keeps the kids excited like the prospect of seeing the second largest ball of twine on the face of the earth, even if it’s four hours away. The four hours just melt away.

TPP: Road food is always an issue, isn’t it? With so much time on the road, I can imagine it’s hard to find places to eat that the whole family will enjoy.

CG: Well, we don’t stop at places where you can put lobsters in jackets, but we do alright on the road. It helps to have relatives along the way like our cousin Eddie, who can do wonderful things with Hamburger Helper. He doesn’t even need to use the hamburger. And his Kool-Aid? To die for.

TPP: Tempers often get short on these trips, don’t they?

CG: You have to be aware of that, Peerless. But you have to remember, it's a quest. It's a quest for fun. I'm gonna have fun and you're gonna have fun. We're all gonna have so much f***ing fun we'll need plastic surgery to remove our goddamn smiles. You'll be whistling 'Zip-A-Dee Doo-Dah' out of your assholes! I gotta be crazy! I'm on a pilgrimage to see a moose. Praise Marty Moose!

TPP: Easy Clark. One last thing. What is the one thing the novice road tripper has to remember about getting out on the road? 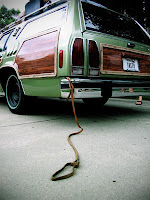 CG: You want to remember – every single time – to check that back bumper before you pull out of the parking lot.

Tonight’s game against the Philadelphia Flyers will be the fourth contest against a divisional leader for the Caps over the last seven games (Tampa Bay twice, and Vancouver being the others). And the Caps are not catching this team at the best of times… well, if you’re a Caps fan. The Flyers have won six of seven games so far in the new year to go to the head of the class in the Eastern Conference. And they have done it by going against type. First, the overall numbers… 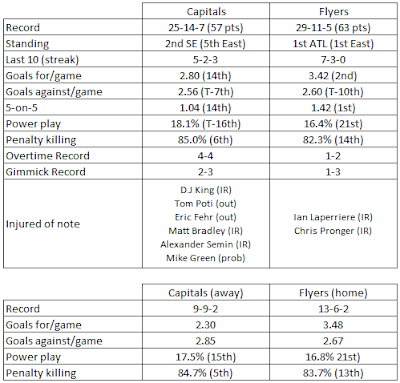 As for going against type, the Flyers are among the top offensive teams in the NHL, currently second in the league in overall scoring and best overall in five-on-five play. So far in the new year the Flyers are doing it with defense. In winning six of seven so far in 2011 the Flyers have allowed 18 goals (2.71 goals/game), but seven of those goals came in one game – a 7-5 loss to Boston on January 13th. Take that stinker away, and the Flyers have allowed only 1.83 goals per game so far this year.

Brian Boucher has received the lion’s share of the work since December 5th. Going 8-2-0, 2.32, .926. But that includes a six goals allowed performance against Boston on January 13th. Absent that misfortune, Boucher has a goals against average of 1.90 and a save percentage of .938 over the last six weeks.

The Flyers have not suffered for offense this season, ranking second in total scoring and first in five-on-five play. In winning six of seven games so far in 2011 the Flyers’ goal scoring has picked up a bit, averaging 3.86 goals a game over that stretch. And no Flyer seems to have enjoyed the turn of the calendar than Daniel Briere, who has had a hand in 11 of the 27 goals scored by the Flyers since January 1st (6-5-10). Three of his six goals were game winners. Briere, despite appearances, has a reputation of a player who will take the odd liberty with another player. There is this incident from Briere’s days in Buffalo that Caps fans will remember…

…and there was this one in the Flyers’ last game, a 3-2 win over the New York Rangers that cost him a thousand bucks…

Which brings us to the other player swiping at Brandon Prust from the Flyer bench in that incident – Scott Hartnell. Hartnell surpassed his goal scoring total from last year (14) when he notched a goal in a 7-5 loss to Boston on January 13th. Since the start of the year Hartnell has posted six goals in seven games and has a Gordie Howe Hat Trick to his credit, so to speak, recording two goals, an assist, and a fight against Paul Gaustad in a 5-2 win over Buffalo on January 11th. He is 7-7-14 in 16 career games against the Caps. Together, Hartnell and Briere account for 12 of the 27 goals scored by the Flyers since the start of the year.

On defense, the Flyers can boast five players with 10 or more points, although their goal-scoring leader – Chris Pronger – is not expected to play due to a broken right foot. It is Matt Carle, though, who leads the Flyer defensemen in points (1-22-23). What might be most impressive about Carle’s point total is that none of his points have come on the power play (only Pronger has scored goals – three – on the power play among Flyer defensemen). He is an example of a style in the Flyers that the Caps might find different from Vancouver.  Whereas the Canucks went low-high to give their defensemen shot opportunties, the Flyers' defensemen seem merely to get pucks toward the net for their forwards to do damage.  Carle has six assists in seven games since the start of the year, and he has only two “minus” games in his last 19 dating back to December 4th.

Until last Thursday, Jeff Carter was on a pace to finish with the second straight season of diminished goal scoring production. After recording 46 goals in 2008-2009 he had 33 last year and until last Thursday was on a pace for 31. But in his last three games he has three goals, one in each. If there is a good sign for Caps fans it is that this three-game streak is a repeat of a three game streak he had to close the 2010 portion of the season. After those three games he embarked on a four-game streak without a goal before starting this most recent run. He is 2-2-4 in six career games against the Caps, including a goal in the last meeting between the teams on November 20th.

Nicklas Backstrom had his first multi-point game in the NHL on November 23, 2007, against the Flyers, including a game-winning overtime goal, in Bruce Boudreau’s first game behind the Capitals’ bench. In 14 career games against the Flyers, Backstrom is 6-18-24. It is his highest point total against any team not in the Southeast Division. He is 1-2-3 in two games against the Flyers so far this season. He does not have a goal since December 1st (20 games) and does not have a multi-point game since December 6th (17 games). If he is going to break either or both of those strings, this could be the game.

1. Roar! Wells Fargo Center is among the more difficult arenas in which visitors play in the NHL. And given the Caps’ troubles in the first period and in getting the first goal, coupled with the fact that the Flyers have the fifth best record in the league when scoring first, finding a way to take the crowd out of the game early will be important.

2. Putting on a show. Last year, Alex Ovechkin scored 26 goals at home, 24 on the road. So far this season he has 11 goals at home – a pace for 17 home goals. But he has only four on the road, which puts him on a pace for eight goals on the road. Only one of those four goals on the road has come at the expense of an Eastern Conference team (Carolina). He had 19 goals in 19 games against the Flyers coming into the season. Maybe this is the game he reasserts himself and puts on a show for the folks on the road…maybe.

3. Keep it close. The Flyers are second in the league in wins of three or more goal margins. Seven of their 13 such wins have come in 21 home games. If the Caps get behind, they could lose contact with this team before too long.

In the end, it is another stiff test in a series that the Caps have faced since the start of the calendar year. So far, the Caps are 1-2-1 in their “tests” against Pittsburgh, Tampa Bay (twice) and Vancouver. Both games with the Flyers so far this season have gone to extra time – a 3-2 overtime win on November 7th and a 5-4 Gimmick loss on November 20th, both at Verizon Center. Will this one go to the extra session or more?

Nahhhhh….but it will be interesting.