Questions: So, how's that "plan" working out? A short history of the draft

In the 2010-2011 season, 28 players appeared in at least 10 games for the Washington Capitals and finished the season with the club. That cohort’s make up and how they were acquired might speak to what we can expect of the Capitals’ “plan” going forward.

Of the 28 players, 14 were drafted, seven were obtained via trade, and seven were signed as free agents. As we have been told often, the Caps plan is to rely primarily on the draft to build and maintain the roster, and to keep it competitive. 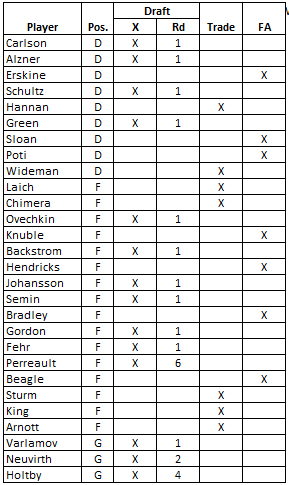 Well, what about that? That half of the Caps’ roster dressing for games this season was built via the draft can reasonably be considered relying primarily on that avenue for building a roster. What is revealing, though, is what that group of 14 players represents. Eleven of them are first round picks, all taken over a period from 2002 through 2009. At least one first round pick from each of those years dressed for at least ten games, except the 2005 class. All in all, that is not a bad record. Quite good, in fact, because over those eight drafts the Caps had 15 total first round picks…

- five of which were middle-ten picks (11-20), three of whom played the full season (and of the others of which was turned into another first round pick)

- seven of which were bottom-ten picks (21-30), five of which played the full season 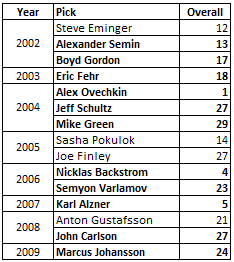 That’s a pretty good outcome. Unfortunately, that kind of success has not been replicated down the draft rounds. Over the same eight year period, the Caps have had 11 second round picks, only one of whom – Michal Neuvirth – is currently with the club (although Theo Ruth, a 2007 second rounder, was part of the deal that brought Sergei Fedorov to Washington in 2008). Chris Bourque is the only other one of that group to have ever dressed for a Caps game over that period. 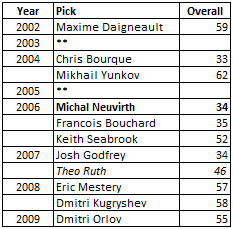 Four of the Caps 15 first round picks over the 2002-2009 period are no longer with the club. The Steve Eminger pick (12th overall in 2002) gets something of a pass, because he was parlayed into the pick that was used to select John Carlson in 2008. But the other three picks – Sasha Pokulok, Joe Finley, and Anton Gustafsson. You just cannot polish them into a shine, no matter how much you try. Pokulok is out of professional hockey, a situation likely accelerated by concussion problems early in his career. But Pokulok was the 39th-ranked North American skater in the Central Scouting Service amateur rankings in 2005. He was the 15th-ranked defenseman in that ranking and was taken with the 14th overall pick in the draft. In retrospect, what did the club see there?

Joe Finley was one of the defensemen ranked ahead of Pokulok in that 2005 CSS ranking and was taken 13 spots later by the Caps (at 27 overall). Looking back, you can probably rationalize that pick as one taken out of uncertainty as to how the post-lockout style of game would unfold. Finley looked more like a “pre-lockout” sort of reach, given his size and orneriness. One could call it a draft-to-type pick, one to fill a need for more physical presence. The game just evolved differently in the post-lockout world.

The other pick – Anton Gustafsson in 2008 (21st overall) – was a good idea gone bad in a hurry. First, there was the pedigree. Gustafsson being the son of a well-known former Cap, Bengt Gustafsson. OK, we get that. And there was the matter of his being ranked fifth among European skaters in the CSS 2005 amateur rankings. On that basis, you might think, “uh, 21st overall?...maybe not a reach.” But the Caps burned another pick to move up to that slot (sending the 23rd and 54th overall picks to New Jersey to move up to 21st). One supposes that in moving up two slots, the idea was that the pick in between – held by Edmonton – would have been spent on that player (Gustafsson). Well, the Caps got their man, and Edmonton settled for Jordan Eberle. The 21-year old finished his rookie season with 18 goals and 43 points for the Oilers. Gustafsson has, to date, played one game of professional hockey in North America (with Hershey in 2009-2010). The best one can say for this is, “things happen.”

Perhaps the best thing that can be said of the first round picks over this eight-year period is that seven of those years produced a first round pick currently on the roster. Although the 2005 draft – the only one in this period from which a first round pick has not appeared for the Caps -- was more or less a disaster (no draftee has yet to play a single game for the Caps), the consistency in getting first round contributions to the roster is absolutely essential to the success of a “draft-first” philosophy. But are the Caps coming to the end of a generation of these picks?

And that begs the question, who is pushing the roster from underneath? Certainly not the second rounders. Dmitry Orlov – a 2009 second rounder – has to be considered a long shot to make the roster at best. Dmitri Kugryshev (a 2008 second round pick) is, again at best, a couple of years from making the roster. The rest of the second rounders of recent vintage are either out of the game (Eric Mestery) or have been disappointments unlikely ever to see a Caps roster (Josh Godfrey, Francois Bouchard). And it does not get better going down the rounds of recent years. Mathieu Perreault might never be consistent enough to crack this roster, and he is an RFA besides. Braden Holtby has shown promise as an NHL goaltender, so there is that. But after that, the down roster hopes pretty much rest on the shoulders of Cody Eakin, a 2009 third rounder, who might make the roster next season. Makes one hope that Evgeny Kuznetsov -- the 2010 first-round pick for the Caps -- finds the idea of playing in North America to his liking.

The Caps have put most – not all, but most of their eggs in the basket marked “draft.” And they have done rather well with first round picks, if getting them to the roster and into the lineup is the principal criterion for success. But by that same criterion, the Caps have done markedly less well after the first round. And that puts a lot of pressure on first rounders to perform. A team with that sort of drafting profile cannot afford to have too many “2005’s” in that mix.

If the Caps can be said to have had a “great” draft over the eight drafts in this look, the 2004 draft would qualify. But this was less a product of getting value late as it was getting multiple picks early – three first round picks. Even 2006, which probably ranks second in quality of drafts in this set, was a product of having three of the top-34 picks, all of whom were on the roster this past season. The ability to acquire additional first round picks salvaged what could have been rather sparse drafts over these eight years. That was how the Caps were able to draft Alexander Semin and Boyd Gordon in 2002, Jeff Schultz and Mike Green in 2004, Semyon Varlamov in 2006, and John Carlson in 2008.

Unproductive picks after the first round balanced by the benefits of multiple first round picks. Unless the Caps improve upon the former, they will have to find a way to keep doing the latter. If they do not, and they continue to pursue a draft-centric approach to roster building, then the Caps are going to find that “window” for winning closing sooner than they suspect as the players they have drafted graduate to bigger contracts, perhaps with different clubs, and there is insufficient advancement from those after-first round picks.

How is that plan going to look then?
Posted by The Peerless at 11:57 PM 3 comments: