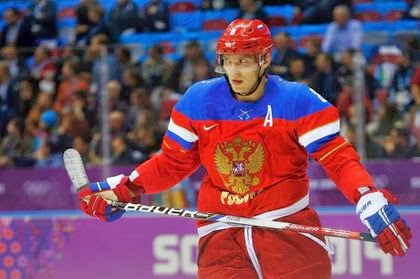 "From life's school of war: what does not kill me makes me stronger"
-- Friedrich Nietzsche

“Whatever doesn't kill you is gonna' leave a scar.”
-- Marilyn Manson

It has been a bad week to be a Russian hockey player in the Winter Olympic Games in Sochi. With the weight of a nation spanning nine time zones bearing down on their shoulders, a desire to sponge away the disappointment of their sixth-place finish in the 2010 Games in Vancouver, and an aspiration to return to international glory in hockey seen only intermittently since the Soviet Union was dissolved in 1991, the Russians had a herculean task.

As anyone who follows the sport knows by now, the weight of that task fell heaviest on the shoulders of the Washington Capitals’ star forward, Alex Ovechkin, and in the end he (not to mention his teammates and coaches) were not up to the task. Russia’s elimination in the quarterfinals meant that they would not medal, the third straight Winter Olympics in which the Russians failed to medal.

Ovechkin, as the Russian face of the Sochi Games, was the lightning rod for commentary before the Games and before the loss to Finland in the quarters, and as might be expected, he is the focus of the post mortems taking place after his team’s elimination.

Whether Ovechkin deserves the lion’s share of the blame (he doesn’t) or none of it (he deserves some of it) is, at this point, of little relevance as the National Hockey League prepares to resume its 2013-2014 season schedule. Of concern to the league, and specifically to the Caps and their fans, is the matter of which Ovechkin will be returning to the Caps on February 27th when they visit the Florida Panthers.

The facile comparison to make here would be to the Ovechkin that emerged from the 2010 Winter Games in Vancouver when the Russians were eliminated by Team Canada in rude fashion, and Ovechkin became something of a poster boy for surliness upon his departure from Vancouver and indifferent play in the aftermath (four goals in his first 15 games with the Caps after the Olympic break).

Caps fans might worry that the higher stakes at Sochi – winning on home soil – and failing to accomplish the goal will have similar, if not proportionally larger effects on Ovechkin’s game upon his return.

We do not see the comparison as being especially relevant. In 2010, circumstances conspired to bring Ovechkin and arch-rival Sidney Crosby onto the same sheet of ice in the quarterfinals with the winner moving on to medal competition, and the loser going home with nothing. For Crosby, the face of his Games in Vancouver, it was a glorious triumph (even, as a lot of folks might have forgotten, he did not register a point in the 7-3 win over Russia). For Ovechkin, it was one more instance of Crosby getting the win, the glory, and the credit, while he slinked off in the wake of the short end of the post-game and post-tournament commentary. Perhaps it was less a character flaw in Ovechkin than the coincidence of a 24-year old in his second Olympics and the continuing battle with Crosby that has its own accompanying narrative that often gets reduced to “Crosby = selflessness, virtue, winning; Ovechkin = selfish, vice (in the hockey sense), losing.”

In 2014, Ovechkin is a 28-year old in his ninth NHL season who has: 1) played in four international tournaments since the debacle in Vancouver, 2) sat through (or suffered, depending on who is doing the questioning) hundreds of interviews, 3) been the subject of scores of stories, flattering and not. One might expect him to be, as many 28-year olds are, much more experienced and mature in dealing with the difficulties of his profession than he was at 24.

Then there is the matter of Crosby and a media-fueled narrative.  It does not have the same impact it did in 2010.  Frankly, neither has approached the white-hot intensity of the moment since those days earlier in their careers when every meeting was an event, and rarely did either fail to rise to that moment.  Since 2010, Ovechkin’s Capitals have been disturbingly consistent in being disappointing, while Crosby has fought injury and his own underachievement in terms of his team’s ability to advance in the post-season.  The Pittsburgh Penguins have but three playoff series wins since those Games in Vancouver in 2010, only one more than the Caps.  This “rivalry” simply does not have the relevance this year as it might have in 2010, even if Crosby’s Canadians should leave Sochi with another gold medal.

Sometimes soldiers fight the last war, and sometimes fans and media recall the last memory of a player or a team in a particular setting.  Ovechkin in the Olympics in 2014 is not the same Ovechkin who came out of the 2010 Games with a tarnished reputation and an attitude not conducive to success on the ice.

Certainly there are those who want to repeat the same tired narratives – selfish, not showing up for the big games, and all that – but that bell does not ring as loudly as it did in 2014, either.  Ovechkin has to bear a measure of fault for his team’s performance, but if anything the performance of the Russians in 2014 laid bare some inconvenient truths about the way they have chosen to manage their participation in the Games.  And that goes far beyond one player, even one of immense talent who was the face of his nation’s Games.

As Ovechkin returns to the NHL, and now having to deal with a family matter one would think far more important than one’s performance on a hockey rink, we find it hard to believe that the disappointment in the Olympics will carry over into his game when he dons the Capitals’ jersey again.  Time has passed.  The 24-year old of 2010 lives in 2010.  The 28-year old in 2014 has a whole host of experiences in the intervening four years, good and bad, just like any other 28-year old.  The maturity has been in evidence in the manner in which he handled the immediate aftermath of his team's loss to Finland, being accommodating to a waiting media when the emotions of losing and disappointment might have been most keenly felt.

The difference, and we do not mean to diminish its importance, is scale.  He has done it over the past four years on a bigger stage with a lot more eyes watching him.  However, while the events of the past week might have scarred him, they might have made him stronger, too.