I just can't help myself with those pepperoni, anchovy, and marshmallow fluff pizzas.  The dreams, the dreams... 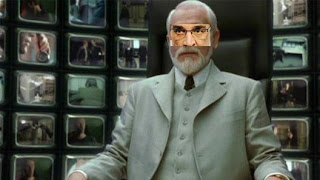 The Architect: I am the Architect. I created the roster. I've been waiting for you. You have many questions, and although the process has altered your consciousness, you remain irrevocably a hockey player. Ergo, some of my answers you will understand, and some of them you will not. Concordantly, while your first question may be the most pertinent, you may or may not realize it is also irrelevant.

Ne-ovi: Why am I the only guy who can play hockey here?

The Architect: Your life is the sum of a remainder of an unbalanced equation inherent to the construction of the roster. You are the eventuality of an anomaly, which despite my sincerest efforts I have been unable to eliminate from what is otherwise a harmony of mathematical precision. While it remains a burden to sedulously avoid it, it is not unexpected, and thus not beyond a measure of control. Which has led you, inexorably, here.

Ne-ovi: You haven't answered my question.

The Architect: Quite right. Interesting. That was quicker than the others.

["Others? What others? How many? Answer me! You mean Bondra? Gartner? Maruk?”]

["Five versions? Three? I've been lied too. This is bullshit."]

Ne-ovi: There are only two possible explanations: either no one told me, or I was making a rap video.

The Architect: Precisely. As you are undoubtedly gathering, the anomaly's systemic, creating fluctuations in even the most simplistic transactions.

["You can't control me! F*ck you! I'm going to go back to Russia! You can't make me do anything!]

The Architect: The first roster I designed was quite naturally perfect, it was a work of art, flawless, sublime. A triumph equaled only by its monumental failure. That’s what you get when you build it with Joe Sacco, Andrei Nikolishin, and Dmitri Mironov. The inevitability of its doom is as apparent to me now as a consequence of the imperfection inherent in every hockey player, thus I redesigned it based on hockey’s history to more accurately reflect the varying grotesqueries of hockey’s nature. However, I was again frustrated by failure – Ivan Ciernik, Robert Lang… Jaromir Jagr. I have since come to understand that the answer eluded me because it required a lesser mind, or perhaps a mind less bound by the parameters of perfection – say, a team owner. Thus, the answer was stumbled upon by another, an intuitive program, initially created to investigate certain aspects of the commercial psyche, such as do hockey fans like red or blue cotton candy? If I am the father of the roster, he would undoubtedly be its…well, uncle.

The Architect: Please. As I was saying, he stumbled upon a solution whereby nearly 99.9% of all test subjects accepted the program by renewing season tickets, as long as they were given a choice, even if they were only aware of the choice at a near unconscious level. While this answer functioned, it was obviously fundamentally flawed, thus creating the otherwise contradictory systemic anomaly, that if left unchecked might threaten the franchise itself. Ergo, those that refused the program, while a minority, if unchecked, would constitute an escalating probability of disaster.

Ne-ovi: This is about The Rebuild.

The Architect: You are here because The Rebuild is about to be destroyed. Its every active player on the roster terminated – or at least traded or let go in free agency – its entire existence eradicated.

The Architect: Denial is the most predictable of all hockey player responses. But, rest assured, this will be the sixth time we have destroyed it, and we have become exceedingly efficient at it.

The Architect: The function of the One is now to return to the source, allowing a temporary dissemination of the code you carry, reinserting the prime program. After which you will be required to select from the roster 23 individuals, 14 forwards, 7 defensemen, two goaltenders to effect The Re-Rebuild. Failure to comply with this process will result in a cataclysmic system crash killing everyone connected to the roster, which coupled with the extermination of The Rebuild will ultimately result in the extinction of the entire Washington hockey club.

Ne-ovi: You won't let it happen, you can't. You need hockey players to survive… or at least keep Verizon Center open during winter.

The Architect: There are levels of survival we are prepared to accept. However, the relevant issue is whether or not you are ready to accept the responsibility for the eradication of every hockey player on this roster.

The Architect: It is interesting reading your reactions. Your five predecessors were by design based on a similar predication, a contingent affirmation that was meant to create a profound attachment to the rest of your species, facilitating the function of the One. While the others experienced this in a very general way, your experience is far more specific. Vis-a-vis, celebrity.

The Architect: Apropos, he entered the matrix – uh Kettler Capitals Iceplex -- to save your reputation at the cost of his own.

The Architect: Which brings us at last to the moment of truth, wherein the fundamental flaw is ultimately expressed, and the anomaly revealed as both beginning…and…end. There are two doors. The door to your right leads to the source, and the salvation of The Rebuild. The door to the left leads back to the roster, to them, and to the end of your species. As you adequately put, the problem is choice. But we already know what you're going to do, don't we? Already I can see the chain reaction, the chemical precursors that signal the onset of emotion, designed specifically to overwhelm logic, and reason. An emotion that is already blinding you from the simple, and obvious truth: you are not going to make the playoffs, and there is nothing that you can do to stop it.

The Architect: Humph… Hope, it is the quintessential hockey player’s delusion, simultaneously the source of your greatest strength, and your greatest weakness.

Ne-ovi: If I were you, I would hope that we don't meet again.

The Architect: We won't.
Posted by The Peerless at 12:57 PM No comments:

Phil Connors, this is your hockey team.

You half expect that the Washington Capitals should take the ice to Sonny and Cher singing, “I Got You Babe.” This season has certainly acquired that whole “Groundhog Day” vibe. Last night, the Caps dropped yet another road game, this time to the Ottawa Senators by a 5-2 margin, a game that really was not nearly as close as the final score indicates. Why?...

-- Ottawa had a 4-0 lead after 32 minutes. The guys who are supposed to do it for the Senators did it. Precocious defenseman Erik Karlsson opened the scoring with a goal and assisted on the next two. Milan Michalek scored those next two goals.. Jason Spezza had a nice assist on the Karlsson goal, Daniel Alfredsson chipped in an assist. The Senators got secondary scoring – Chris Phillips with a goal from Nick Foligno and Chris Neil. Foligno getting an empty netter from Neil and Sergei Gonchar was the cherry on top of the sundae.

-- The Caps… pulled their starting goalie (Tomas Vokoun..again) after giving up four goals on 11 shots in 32:08. They had 14 of their 35 shots on goal from two players (Mike Green, Jason Chimera). Neither had a goal. They had a player engage in his first fight in more than three years (Brooks Laich, who last fought in Montreal against Ryan O’Byrne on December 13, 2008…how long ago was that? It was Semyon Varlamov’s first game in the NHL). Troy Brouwer had no shot attempts in almost 19 minutes of ice time, and he was on the ice for three goals against.

-- With Alex Ovechkin and Nicklas Backstrom out, it required that others step up. Well… Alexander Semin did not record his first shot on goal until the 4:41 mark of the second period. By that time the Caps were down, 3-0. Tomas Vokoun had to shut the door. Not that he had much to work with in front of him, but still… four goals on 11 shots? That’s six goals allowed on the last 18 shots he has faced. A .667 save percentage is not quite what the Caps had in mind for a stretch run. Laich, who might be playing on little more than one leg at the moment, did not have a point, lost nine of 12 draws, had that fight (he didn’t pick a patsy; it was Zack Smith’s seventh fight this season), and was on the ice for three goals against. Dennis Wideman did not have a point, was on the ice for three goals against, and took an offensive zone penalty with the Caps on a power play.

-- This loss made two years in a row that the Caps won the first three games in the season series against Ottawa, only to lose the fourth game.

-- Things happen when John Carlson is on the ice. He was on for five goals – three for Ottawa, two for the Caps.

OK, so… the Caps have lost to Tampa Bay (11th in the East), Carolina (15th in the East), and Ottawa in the last five days by a combined score of 12-3. They were 1-for-9 on the power play in those three games; their penalty kill was 9-for-12. Two of the losses came to backup goaltenders, one of them getting his first career shutout in the NHL. Their own starting goaltender was pulled twice. Their top two players (humor us) are now on the bench with injuries, another is trying to play through one, and yet another one is just coming back from one.

If this isn’t the worst week of hockey in these parts – on a lot of levels – in the last two decades, they can sure see it from here.