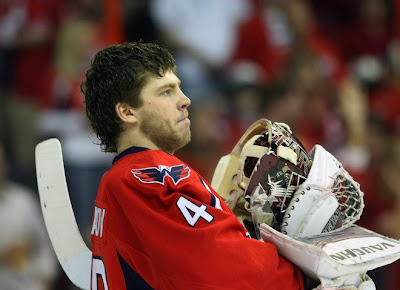 And the coach that carried a resilient bunch of precocious kids, led by a scruffy-bearded world-class talent and a goalie who was equal parts spell-binding and spectacular through the first 12 games he played in the playoffs, turned into a pumpkin that carried a young (second-youngest average age among the eight surviving teams in the second round) collection of talented kids not quite ready for the biggest stage, backstopped by a goalie who finally showed the cracks you might have expected to see earlier on in a just-turned-21 year old.

The better team won. There is no other argument to be made here, not after a 6-2 pasting of the Caps by the Pittsburgh Penguins in a Game 7 that never matched the pre-game hype after the first few minutes. The Penguins showed considerable resiliency of their own, having come back from an 0-2 deficit in games, having lost a tough overtime decision in Game 6, and having lost their best defenseman for almost three full games, yet they still came out on the long end of the seven game series.

The Penguins were deeper, stronger on the puck, more aggressive, and more able to impress their will on games. That they won this series is no fluke, not the product of officiating or bad bounces. They were simply – and ultimately – better.

And the Caps? Their goalie of the future in the present – Simeon Varlamov – finished the game on the bench, and their Norris Trophy candidate defenseman finally went as far as he could go. All that is left with respect to Mike Green is an announcement of what injury he had that all but crippled him in this series. We suspect he suffered a shoulder injury in the Ranger series that affected everything from his shooting, to his passing, to his ability to carry the puck. He played only one shift in the third period and did not play in the last 17:58 of the contest. All the Caps had left was Alex Ovechkin, but not even his broad shoulders could carry the load against a Penguin team that had contributions from up and down the roster.

So, the Caps can take their razors out of their medicine cabinets, and the Penguins can contemplate facing Boston or Carolina. One gets the feeling that this is only the first of what will be many meetings between these clubs in the playoffs over the next decade. All other Eastern Conference teams are now on notice that hereforth, any road to the Stanley Cup finals goes through Pittsburgh and Washington.

But this was Pittsburgh’s night and Pittsburgh’s series. To the Penguins and their fans, congratulations and good luck in the weeks ahead. 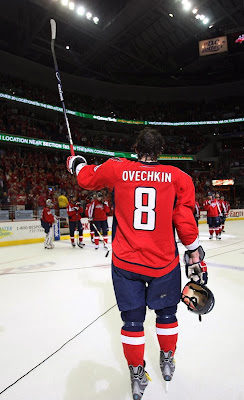 The Peerless Prognosticator is ON THE AIR!!! -- Eastern Conference Semifinals, Caps vs. Penguins...Game 7

It’s Game 7… but you already knew that. It will be the only NHL game played this evening, so you can bet that all of the eyes of the hockey world in North America – and a lot of other places – will be trained on what is unfolding in Verizon Center this evening.

And if you’re looking for motivation on the part of the Caps, look no further than that quote machine that is Brooks Laich…

"When (Joffrey) Lupul scored I sat on the bench and it honestly felt like someone had just ripped my heart out. We had been on such a run for two or three months leading up to that. We had won our last seven in a row to get into the playoffs. We had battled back from down 3-1 (to the Flyers) and all of a sudden it just felt like we died. It was the worst feeling and I don't wish it upon anybody. Your season crashes and it's all over, and that's why you fight so hard to avoid it."

There are 20 Capitals and a legion of fans who are, in fact, wishing it on someone – anyone who wears black and Vegas gold. Two of those Caps fans are right here…

Cheerless? Fearless? What are the keys here?

Cheerless, you have a response?

"If the Caps haven’t outshot the Penguins in any game in this series, what makes y’all think they’re gonna do it now? But here’s the thing… I did some arithmetic on this…"

“It took you four tries…”

“Well, whatever…if the Caps can keep the shot differential under ten in the Penguins favor, Fleury’s save percentage works against him. For example, at their current save percentages, if Varlamov faces 40 shots and Fleury faces 30, each team would end up with four goals.”

“Yeah, well, let’s put it another way… if the Penguins are lighting the Caps up for 40-45 shots, ya gotta wonder if the kid, who has already faced 226 shots in six games, has enough in the tank to pull this one out.”

“That’s why this one is probably going to be decided at the other end of the ice. If the Caps can get a few more of those 54 chances they had in Game 6 on net (they had only 24 shots on goal, along with 19 attempts blocked and 11 misses) in Game 7, then the cracks in Fleury’s game might look a little wider.”

Good point, Fearless. But what about the skaters? Crosby and Ovechkin have largely cancelled one another out in this one… “Yes, cousin, they have, but there is something of an ominous number you didn’t include there. Crosby has 29 shots on goal, while Ovechkin has 38. But 21 of Ovechkin’s shots came in Games 1 and 2. He’s had 17 in the last four. That’s a lot for your normal NHL player (over 82 games, it would have been the fourth highest total in the league this year). But it is a reflection of the job the Penguins – and Hal Gill and Rob Scuderi in particular – have done in limiting Ovechkin’s chances.”

So, if the Caps can get more favorable matchups – spring Ovechkin loose against other defensemen – it could play in the Caps’ favor?

Is Evgeni Malkin the “X” factor in this one?

“And David Steckel has one in each of the Capitals’ wins in this series.”

So, like we’ve been saying, it’s the support guys who might be the ones telling the tale, despite all the hype on the big guys.

Right you are, Cheerless. OK, guys, let’s get to the bottom line here. Who wins?

“The Caps have been resilient in the face of elimination, they’ve had a successful season at home. And then there’s the karma of that Hershey win last night to eliminate the Baby Pens… 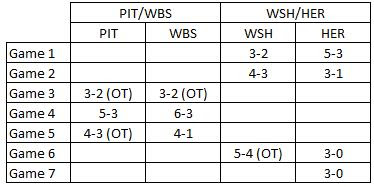 “I still don’t know who this Karma lady is, but I like the Caps… why? Cuz if they win, you’ll keep invitin’ me here and giving me free beers.”

Well, there it is, but if the fans need some inspiration to get them going tonight, The General gets the final word one more time…

Posted by The Peerless at 6:58 AM No comments: