The Washington Capitals wrapped up their four-game road trip on Wednesday night with a 1-0 Gimmick loss to the New York Rangers at Madison Square Garden.  It was hardly an advertisement for the NHL, but worse, it dropped the Caps two points behind the New Jersey Devils for the top spot in the Metropolitan Division.

There was no scoring and, frankly, even less action.  The Rangers had a 10-8 edge in shots on goal, but the Caps had a 17-13 edge in shot attempts.  There were no power plays.  Matt Niskanen led the good guys with two shots on goal.  If there was an odd statistic, it was that the Caps had as many shots blocked (eight) as shots on goal.  Lars Eller won four of five draws, which was the difference between a bad period (6-for-16) and a ghastly one (2-for-11 without Eller) in the circle.  More odd stuff…Nicklas Backstrom and Alex Chiasson led the Caps in credited hits (two apiece).  It was the sort of period one might expect as the first one after a holiday break, the hockey equivalent of getting up from the dinner table, waddling over to the recliner, sitting back, and unbuttoning one’s pants before dozing off.  Someone has to win this game, because that’s what the rules require, but it isn’t too early in this one to think neither team deserves it.

It was a lot more of the same over the first half of the period, but then the Caps were awarded a power play, so there was the promise of some excitement.  Shots from Nicklas Backstrom and John Carlson yielded nothing, and then it was the Rangers’ turn to enjoy a power play.  Even less to be had there, as the Caps held the Blueshirts without a shot on goal for the two minutes.  And then the Caps got another power play late in the period.  Alex Ovechkin had a shot on goal…not “in” goal.  And so, the teams went to the second intermission without a red light having been lit.  The Caps did have a 21-18 edge in shots on goal and a 36-28 advantage in shot attempts.  Jakub Vrana led the team with three shots on goal, while Nicklas Backstrom had four shot attempts to top the roster.  Vrana was the only Capital with a better than 50 percent mark in the faceoff circle through 40 minutes…he won his only draw.

The Rangers started the period with an all-out assault on the Caps’ net, outshooting the Caps 8-1 before the period was four minutes old.  Philipp Grubauer was up to that challenge, though.  And another…and another…and, well, you get the picture.  By the time the period was over, Grubauer made a case to be the Vezina Trophy winner on the basis of one game…one period, in fact…stopping all 18 shots he faced in the period, many of them of the “best saves of the night” variety.

The Caps had their chance.  John Carlson had a glorious opportunity on a wrap around, but a Jedi force field apparently kept the puck from going in as it crawled the entire length of the goal line before deflecting off the far post and out.  And then, Alex Ovechkin took a tripping penalty with less than 30 seconds left.  The Rangers could not convert, though, and the game went to the freestyle competition.

A 1-1-2 road trip is not the worst of outcomes, but how one gets there matters.  The Caps started with an encouraging win in a difficult city, winning in overtime in Dallas.  But losing to the woeful Arizona Coyotes in overtime, having their lunch eaten in front of them in the first 15 minutes in a 3-0 loss to Vegas, and then this sleep-inducting spectacle made for what ended up being a disappointing trip.  The Caps will wrap up the 2017 portion of their season at home against Boston and New Jersey.  One hopes the familiar surroundings will give them a boost of energy that seemed lacking on this trip.

The Peerless Prognosticator is ON THE AIR!!! -- Game 39: Bruins at Capitals, December 28th

After a four-game absence wrapped (get it?) around the Christmas holiday, the Washington Capitals return home on Thursday night to host the Boston Bruins at Capital One Arena. These teams met last on December 14th, the Caps taking a 5-3 decision in Boston, the five goals tying their season high in a road game, also achieved in New Jersey against the Devils in a 5-2 win on October 13th and again in Edmonton against the Oilers in a 5-2 win on October 28th).

Since dropping that 5-3 decision to the Caps, the Bruins have rolled to a five-game points streak (4-0-1) and a four-game winning streak.  Boston has done it over the last five games with some offense, including a 7-2 pasting of the Columbus Blue Jackets, averaging 3.2 goals per game.  They have also done it with defense, highlighted by a 3-0 shutout of the Buffalo Sabres, averaging just 1.4 goals per game allowed.

The veterans have carried the mail in the five-game streak, led in goals by Brad Marchand and Patrice Bergeron with three apiece.  Marchand has displayed a noteworthy level of consistency this season, recording just the first instance of consecutive games without a point on his ledger in the shutout of Buffalo and a 2-1 Gimmick win over the Winnipeg Jets.  Marchand has points in 20 of the 26 games in which he played this season (not including Wednesday night’s game against the Ottawa Senators).  The odd part of Marchand’s season to date, though, might be the absences.  He has missed eight games in two separate blocks, over which the Bruins went 5-3-0.  Boston is 14-7-5 when Marchand is in the lineup.  That, plus the 9-1-4 record when Marchand recorded a goal in games so far, makes the ornery cuss a player to be mindful of when he is on the ice, and not just for his frequent chippy hijinks.  Marchand is 7-9-16, minus-7, in 25 career games against the Caps.

Patrice Bergeron is the antithesis of Brad Marchand on the ice.  In 13 previous seasons, all with Boston, Bergeron has carved out a reputation for being a defensive wizard (eight straight seasons receiving Selke Trophy votes as the league’s top defensive forward, winning four times, including last season) and a gentlemanly player (11 seasons receiving Lady Byng Trophy votes).  Not that he has been unproductive.  Bergeron ranks eighth in franchise history in goals scored (269) and seventh in points (695).  Only four players in team history have appeared in more games for the Bruins than Bergeron (928).  Lately, he has been a “deuces wild” sort of player.  In four of the last five games in which he recorded points, he did so by posting two, including a pair of goals against the Caps in the Bruins’ 5-3 loss in Boston earlier this month.  In 43 career games against the Caps, Bergeron is 12-26-38, minus-8.

Danton Heinen is tied with David Backes for second in total scoring over the Bruins’ five-game points streak (2-3-5).  He has been something of a find for the Bruins, taken as a fourth-round pick (116th overall) in the 2014 draft by the B’s.  After two seasons with the University of Denver Pioneers in the NCAA and a stop with the Providence Bruins in the AHL, he got his first taste of the NHL last season, dressing for eight games in which he did not record a point.  The points have come this season, though, in enough volume for Heinen to rank tenth among rookies in total scoring (8-14-22).  His 14 assists is tied for sixth among this season’s rookies.  When he recorded a pair of assists against the Caps in the 5-3 loss in Boston two weeks ago, it set him off on a four-game points streak (2-5-7), but he is without a point in his last two contests.  Those two assists are his only career points in two games against Washington. 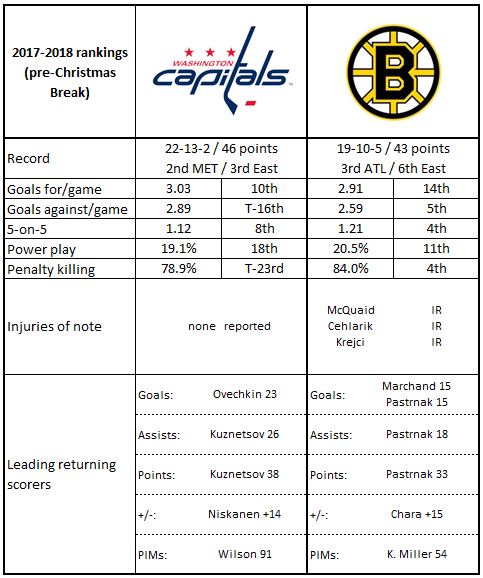 1.  Holding teams under thirty shots seems to be quite a chore this season in the NHL.  Boston has done it 18 times, third-most in the league (Carolina and St. Louis have done it 22 times apiece).  They also rank third in fewest shots per game (29.8, behind only Carolina (29.5) and Dallas (29.4)).

5.  The Caps lead the league in wins when leading after one period (14).

If there is a potential subplot to this game, it is the impenetrable object meeting the leaky sieve.  And both would be Tuukka Rask, the former representing his 8-0-1, 1.45, .946 record, with one shutout, over his last ten appearances (one no-decision), a string of games that includes none allowing more than two goals in regulation (his lone loss was in a 3-2 overtime loss to the New York Rangers on December 16th).  On the other hand, there is the 1-10-5, 3.07, .889 career record against the Caps (with one shutout).  Sure, Rask has more losses against the Montreal Canadiens (15), but that number has accumulated over 26 career games).  And he does have a worse save percentage against the Anaheim Ducks (.865), but that is over less than half the ice time (464 minutes) than he has against the Caps (937 minutes).  He has as many wins against the first-year Vegas Golden Knights (one in two games) as he has against the Caps (in 17 games).  Is there a law of averages or a balancing of the hockey fates to be had here, or are the Caps just “that team” against which he will have a career’s long frustration?  Let’s hope for the latter if he gets the call in the second half of the Bruins’ back-to-back.

If there is a better indicator of Capitals success in team history than Jay Beagle, it would be hard to find.  Beagle has points in 94 of the 429 games he has dressed in his Caps career, and the team is 77-10-7 in those games.  The Caps are 38-1-5 in games in the 44 games in which he scored a goal.  This season, the Caps are 8-2-0 when Beagle recorded a point, 4-0-0 when he posted a goal.  After going 2-4-6 over a nine-game stretch from November 24th through December 12th (over which the Caps were 7-2-0), he is without a point in his last five games. And more Beagle is a good thing.  Perhaps this is a product of being able to roll four lines in games in which the Caps have leads, but through Christmas the team is 12-2-0 in games in which Beagle logged at least 13 minutes in ice time.  And an active Beagle is a good thing, too, at least in terms of shots.  The Caps are 16-6-1 when Beagle recorded at least one shot on goal, 6-7-1 when he did not.  He is 1-2-3, minus-3, in 17 career games against Boston.

We are now entering the great void of the NHL season, those games between Christmas and the trading deadline that can be a bit of a grind, but a part of the season that can make or break a team.  Last season, the Caps went 22-5-3 in the 30 games between Christmas and March 1.  It is the time that tests the discipline of a team and their attention to detail and execution.  Those elements have been spotty to date with this year’s edition of the Caps, but now we get to see just what sort of team this is as the schedule turns to the most grueling stretch of the season.

Posted by The Peerless at 9:00 PM No comments: